I have said before that someone needs to go to court and get a “gag order” to keep Donald Trump from tweeting or talking about the coronavirus pandemic. His attempts to politicize what should be an emergency medical response by the federal government has already cost people their lives. It is also wrecking the economy.

Last night President Trump gave a national address from the Oval Office about the coronavirus pandemic, and let’s just say that the headlines this morning told the story.

If President Trump’s goals in his prime-time address to the nation were to reassure Americans and unify the country in the face of the coronavirus pandemic, it seems safe to say that he achieved neither[.]

Mr. Trump appeared uncomfortable in the setting, reading the words from the teleprompter in a wooden manner that made no emotional connection to a television audience of millions scared about an virus they cannot see and uncertain about a society that is rapidly transforming around them. Even with the text on the screen in front of him, the president managed to mischaracterize his own policies in a way that required his administration to correct him afterward.

His speech referred to the pandemic as a “foreign virus” that “will not have a chance against us” as if it were a hostile enemy nation to be defeated on the battlefield. But while he read the words about unity, he made no effort to reach out to the opposition to forge a common front. While he announced a partial travel ban on visitors from Europe and talked about measures to prop up the economy, he did not discuss the troubles with the availability of testing kits or express understanding of the changes in everyday life affecting so many Americans.

The Washington Post’s Dan Balz: Trump’s Oval Office speech did the opposite of what it was supposed to do:

In times of national crisis, people look to the president for direction, reassurance and confidence. President Trump’s Oval Office speech on Wednesday night provided precisely the opposite.

From the misstatements to the omissions to his labored demeanor, the president sent a message that shook financial markets, disrupted relations with European allies, confused his many viewers and undermined the most precious commodity of any president, his credibility.

With the stock markets plunging into bear territory, the health-care system struggling to keep pace with the spreading virus and Americans wondering what’s next, Trump is dealing unsteadily with the greatest crisis of his presidency.

The New York Times reports this afternoon, U.S. Stocks Have Their Worst Day Since 1987 Crash:

Stocks continued their plunge on Thursday, as President Trump’s latest effort to address the coronavirus outbreak — a ban on the entry from most European countries to the United States — disappointed investors who have been waiting for Washington to take steps to bolster the economy.

Trading was turbulent, with stocks staging a brief comeback as investors reacted to the Federal Reserve’s decision to offer at least $1.5 trillion worth of loans to banks to help smooth out the functioning of the financial markets. But the selling picked up again by midafternoon.

The S&P 500 closed down about 9.5 percent, its biggest daily drop since the stock market crashed in 1987, on what came to be known as Black Monday. The decline has left stocks in the United States firmly in a bear market — a term that signifies a decline of 20 percent from the most recent highs.

For the Dow Jones industrial average, the drop of 10 percent was also its worst since the 1987 stock market crash.

The stock market on Thursday shrugged off dramatic intervention by two central banks and a televised prime-time address by President Trump, posting its largest one-day loss since 1987, as the coronavirus outbreak continues to pummel the global economy.

The Dow Jones Industrial Average posted its largest one-day point loss in history, dropping almost 2,353 points to close at 21,200.47. In percentage terms, the 10 percent loss marked the Dow’s worst day since 1987. Both the Dow and the broader S&P 500 index fell for the 13th time in the last 15 sessions.

Wall Street’s stunning meltdown over the past month has erased almost all of the stock market gains since Trump’s November 2016 election. On Feb. 12, the Dow was up more than 61 percent since his surprise win. Now the total gain is around 11 percent.

Thursday’s decline reflected investor unease with the handling of the crisis by global leaders including European Central Bank President Christine Lagarde and Trump and the emergence of structural problems in financial markets that were overlooked during a record 11-year economic expansion.

“It’s primarily the response to bad or absent leadership, particularly on the public health front, and unhelpful statements by the Trump administration, ECB and others that’s fundamentally what’s driving this,” said Adam Posen, a former member of the Bank of England’s rate-setting committee.

Malfunctioning markets were the target of an extraordinary action Thursday by the Federal Reserve Bank of New York.

In an effort to stabilize markets, the New York Fed announced plans to pump more than $1 trillion into the short-term lending markets that banks use to lend to each other on Thursday and Friday.

The Fed also announced it will buy $60 billion worth of Treasury bonds for the next month from March 13 through April 13, to help keep that market functioning appropriately. Earlier this week, investors reported problems trading in U.S. government bonds. These irregularities echoed the types of freezes seen during the 2008 financial crisis and the Fed appeared to want to act quickly to stop them.

In a statement Thursday, the New York Fed said these actions were taken “pursuant to instruction from the chair,” meaning Fed Chair Powell called for them.

The action comes amid an especially tumultuous day on Wall Street that forced a brief cessation of trading and sent the Dow Jones industrial average tumbling as much as 2,200 points.

[I]t was the S&P 500 index′s 7 percent slide that triggered the circuit breaker — a 15-minute break to stop the free-fall and give traders time to recalibrate. The cool-down was temporary, though, with the blue-chip index sinking more than 2,200 points before rebounding slightly. By midday, it was down more than 1,800 points, or 7.8 percent, while the S&P 500 was off 7.2 percent and the tech-heavy Nasdaq down nearly 7 percent.

Earlier in the week, the S&P 500 triggered the first circuit breaker on Monday after falling 7 percent early into the session. By the end of day, it had shed 7.6 percent and the Dow had lost a stunning 2,014 points, or 7.8 percent.

Among stock market plunges that started right at the top, it’s been the fastest 20% decline to a bear market ever recorded.

You can search for years and get nowhere, examining stock gyrations for clues about economic growth. But when U.S. benchmarks slide into a bear market, that’s a different story.

Thirteen times the S&P 500 has completed the requisite 20% plunge in the last 93 years. In just two of those episodes did the American economy not shrink within a year: 1987 and 1966. It works the other way around, too. Among 14 recessions over the span, only three weren’t accompanied by a bear market. 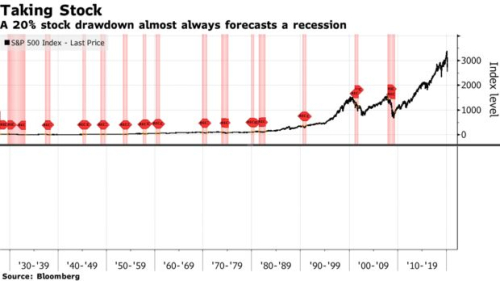 “That’s what people have to be realistic about,” said Jerry Braakman, who helps oversee about $1.9 billion as chief investment officer of First American Trust, in Santa Ana, California. “We are in unknown territory, it could get worse. As the government takes action, people will be thinking about great-financial-crisis situations. People are panicking.”

It’s a common adage: the stock market isn’t the economy. But the saying loses its pull at times like this, both because of the force it takes to knock the market this hard, and the impact of equity losses on consumer psychology. Also: usually the market warns something is awry long before economic growth goes negative.

The spreading coronavirus and historic oil-price shock have ushered in the most volatile period in markets since the financial crisis, and a Bloomberg Economics model places the odds of a recession over the next year at 52%, the highest since 2009.

According to JPMorgan’s John Normand, financial markets across assets have priced in an 80% probability of recession happening — the highest it’s ever been without the U.S. actually being in one (and we may already be).

What we know for certain is that Donald Trump is a danger to Americans’ health and bad for our economy. There is a good chance that things could go south very soon as the coronavirus pandemic hits its full multiplier effect of community spread in the next few weeks and begins to overwhelm our fragile health care system.

No one could have predicted this at the beginning of the year.

If Republicans succeed in killing the U.S. Postal Service, there will be no mail voting

If Republicans succeed in killing the U.S. Postal Service, there will...

Democracy faces its Greatest Test here and around the World During...

McSally Voted AGAINST Including Enhanced Unemployment Benefits in CARES Act

Leaders Across the Country are Failing Mother Nature’s IQ Test