WaPo: Donald Trump is a ‘unique and present danger’ to American democracy

Home/National Elections/WaPo: Donald Trump is a ‘unique and present danger’ to American democracy
Previous Next

WaPo: Donald Trump is a ‘unique and present danger’ to American democracy

The Washington Post’s editorial page has a rare full page editorial arguing that Donald Trump is a unique threat to American democracy: 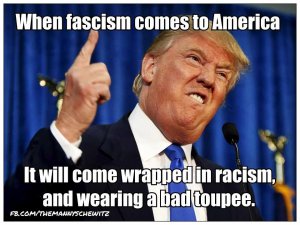 DONALD J. TRUMP, until now a Republican problem, this week became a challenge the nation must confront and overcome. The real estate tycoon is uniquely unqualified to serve as president, in experience and temperament. He is mounting a campaign of snarl and sneer, not substance. To the extent he has views, they are wrong in their diagnosis of America’s problems and dangerous in their proposed solutions. Mr. Trump’s politics of denigration and division could strain the bonds that have held a diverse nation together. His contempt for constitutional norms might reveal the nation’s two-century-old experiment in checks and balances to be more fragile than we knew.

Any one of these characteristics would be disqualifying; together, they make Mr. Trump a peril. We recognize that this is not the usual moment to make such a statement. In an ordinary election year, we would acknowledge the Republican nominee, move on to the Democratic convention and spend the following months, like other voters, evaluating the candidates’ performance in debates, on the stump and in position papers. This year we will follow the campaign as always, offering honest views on all the candidates. But we cannot salute the Republican nominee or pretend that we might endorse him this fall. A Trump presidency would be dangerous for the nation and the world.

Why are we so sure? Start with experience. It has been 64 years since a major party nominated anyone for president who did not have electoral experience. That experiment turned out pretty well — but Mr. Trump, to put it mildly, is no Dwight David Eisenhower. Leading the Allied campaign to liberate Europe from the Nazis required strategic and political skills of the first order, and Eisenhower — though he liked to emphasize his common touch as he faced the intellectual Democrat Adlai Stevenson — was shrewd, diligent, humble and thoughtful.

In contrast, there is nothing on Mr. Trump’s résumé to suggest he could function successfully in Washington. He was staked in the family business by a well-to-do father and has pursued a career marked by some real estate successes, some failures and repeated episodes of saving his own hide while harming people who trusted him. Given his continuing refusal to release his tax returns, breaking with a long bipartisan tradition, it is only reasonable to assume there are aspects of his record even more discreditable than what we know.

The lack of experience might be overcome if Mr. Trump saw it as a handicap worth overcoming. But he displays no curiosity, reads no books and appears to believe he needs no advice. In fact, what makes Mr. Trump so unusual is his combination of extreme neediness and unbridled arrogance. He is desperate for affirmation but contemptuous of other views. He also is contemptuous of fact. Throughout the campaign, he has unspooled one lie after another — that Muslims in New Jersey celebrated after 9/11, that his tax-cut plan would not worsen the deficit, that he opposed the Iraq War before it started — and when confronted with contrary evidence, he simply repeats the lie. It is impossible to know whether he convinces himself of his own untruths or knows that he is wrong and does not care. It is also difficult to know which trait would be more frightening in a commander in chief.

Given his ignorance, it is perhaps not surprising that Mr. Trump offers no coherence when it comes to policy. In years past, he supported immigration reform, gun control and legal abortion; as candidate, he became a hard-line opponent of all three. Even in the course of the campaign, he has flip-flopped on issues such as whether Muslims should be banned from entering the United States and whether women who have abortions should be punished . Worse than the flip-flops is the absence of any substance in his agenda. Existing trade deals are “stupid,” but Mr. Trump does not say how they could be improved. The Islamic State must be destroyed, but the candidate offers no strategy for doing so. Eleven million undocumented immigrants must be deported, but Mr. Trump does not tell us how he would accomplish this legally or practically.

What the candidate does offer is a series of prejudices and gut feelings, most of them erroneous. Allies are taking advantage of the United States. Immigrants are committing crimes and stealing jobs. Muslims hate America. In fact, Japan and South Korea are major contributors to an alliance that has preserved a peace of enormous benefit to Americans. Immigrants commit fewer crimes than native-born Americans and take jobs that no one else will. Muslims are the primary victims of Islamist terrorism, and Muslim Americans, including thousands who have served in the military, are as patriotic as anyone else.

The Trump litany of victimization has resonated with many Americans whose economic prospects have stagnated. They deserve a serious champion, and the challenges of inequality and slow wage growth deserve a serious response. But Mr. Trump has nothing positive to offer, only scapegoats and dark conspiracy theories. He launched his campaign by accusing Mexico of sending rapists across the border, and similar hatefulness has surfaced numerous times in the year since.

In a dangerous world, Mr. Trump speaks blithely of abandoning NATO, encouraging more nations to obtain nuclear weapons and cozying up to dictators who in fact wish the United States nothing but harm. For eight years, Republicans have criticized President Obama for “apologizing” for America and for weakening alliances. Now they put forward a candidate who mimics the vilest propaganda of authoritarian adversaries about how terrible the United States is and how unfit it is to lecture others. He has made clear that he would drop allies without a second thought. The consequences to global security could be disastrous.

Most alarming is Mr. Trump’s contempt for the Constitution and the unwritten democratic norms upon which our system depends. He doesn’t know what is in the nation’s founding document. When asked by a member of Congress about Article I, which enumerates congressional powers, the candidate responded, “I am going to abide by the Constitution whether it’s number 1, number 2, number 12, number 9.” The charter has seven articles.

Worse, he doesn’t seem to care about its limitations on executive power. He has threatened that those who criticize him will suffer when he is president. He has vowed to torture suspected terrorists and bomb their innocent relatives, no matter the illegality of either act. He has vowed to constrict the independent press. He went after a judge whose rulings angered him, exacerbating his contempt for the independence of the judiciary by insisting that the judge should be disqualified because of his Mexican heritage. Mr. Trump has encouraged and celebrated violence at his rallies. The U.S. democratic system is strong and has proved resilient when it has been tested before. We have faith in it. But to elect Mr. Trump would be to knowingly subject it to threat.

Mr. Trump campaigns by insult and denigration, insinuation and wild accusation: Ted Cruz’s father was involved in the assassination of President John F. Kennedy; Hillary Clinton may be guilty of murder; Mr. Obama is a traitor who wants Muslims to attack. The Republican Party has moved the lunatic fringe onto center stage, with discourse that renders impossible the kind of substantive debate upon which any civil democracy depends.

Most responsible Republican leaders know all this to be true; that is why Mr. Trump had to rely so heavily on testimonials by relatives and employees during this week’s Republican convention. With one exception (Bob Dole), the living Republican presidents and presidential nominees of the past three decades all stayed away. But most current officeholders, even those who declared Mr. Trump to be an unthinkable choice only months ago, have lost the courage to speak out.

The party’s failure of judgment leaves the nation’s future where it belongs, in the hands of voters. Many Americans do not like either candidate this year . We have criticized the presumptive Democratic nominee, Hillary Clinton, in the past and will do so again when warranted. But we do not believe that she (or the Libertarian and Green party candidates, for that matter) represents a threat to the Constitution. Mr. Trump is a unique and present danger.

Donald Trump is merely the manifestation of the disease. The disease is a Republican Party that has abandoned democracy and embraced ‘Trumpism,’ the new American fascism. This fascism long predates Trump himself, he is merely taking advantage of its existence in the Republican Party.  This fascism has been nurtured and developed by the conservative media entertainment complex propaganda machine for several decades. It is the people behind this propaganda machine who pose the greatest threat to American democracy.