Today Piyush “Bobby” Jindal, the Dominionist governor of Louisiana, announced that he too is running for president. Bobby Jindal enters race seeking mantle of ‘outsider’.

“Bobby” has an undeserved reputation as a “policy wonk” (as if) among the useless Beltway media villagers.

Jindal’s first order of business will be to improve his standing in the polls enough to qualify for the GOP debates, the first two of which will be capped at 10 candidates based on national polling numbers.

He barely registers in national polls and currently sits in 15th place, according to the RealClearPolitics (RCP) average with less than 1 percent support.

The Louisiana governor’s outsider bid will hinge on his performance in the Iowa caucuses, where he’ll be competing with Sen. Ted Cruz (Texas), Ben Carson, and former Sen. Rick Santorum (Pa.) for the support of socially conservative voters.

Jindal is currently performing as dismally in Iowa as he is nationwide, buried in 14th place according to the RCP average.

Jindal has emerged as a fierce critic of radical Islam and a conservative firebrand on the issue of religious freedom, which are important issues to the social conservatives who turn out in strong numbers for the first-in-the-nation caucuses.

“Christianity is under assault today in America,” Jindal said Wednesday. “I’m going to say this slowly so that even Hillary Clinton can understand it. America did not create religious liberty, religious liberty created the United States of America, and it’s time we stopped trying to divide ourselves against each other.”

He has also become a one-man crusade against Common Core. He once supported the education standards, but is now suing the federal government to get rid of them in Louisiana.

Jindal is the 13th Republican candidate to officially enter the race.

The National Organization for Marriage has urged Republican candidates seeking the presidential nomination to sign its pledge, once again, promising to support a constitutional amendment defining marriage as being between one man and one woman. Mike “Huckajesus” and Rick Santorum are the only two Republican presidential candidates who have signed on to the pledge so far.

Even the supposedly “mainstream moderate” J.E.B.(!) Bush “told a gathering of religious conservatives on Friday that the debate over same-sex marriage should continue “irrespective of what the courts say,” signaling that he would not consider a Supreme Court decision favorable to gay rights as the last word on the subject.” Jeb Bush Pledges Debate on Gay Marriage After Court Ruling.

How long before the Dominionists will be talking about impeaching Supreme Court Justices for not ruling the way they like?

In other news, Governor Goodhair Rick Perry may soon not be the only GOP candidate in the race under investigation by prosecutors for corruption in office. The “Jersey Devil” Chris Christie will announce next week according to Tiger Beat on the Potomac. Chris Christie to announce 2016 bid as early as next week:

Chris Christie is in the final stages of preparing his 2016 presidential bid, with a formal announcement possible as soon as next week, according to several [unidentified] sources familiar with the discussions.

A Christie spokeswoman, Samantha Smith, declined to comment. The governor’s aides have previously said that he isn’t likely to launch his presidential campaign until the New Jersey legislature finalizes the state budget — expected to be around the end of June.

Earlier this month, Christie dropped another hint that he was nearing a run. While campaigning in New Hampshire, the governor said that his family — one of the last major hurdles to his entering the race — was on board.

Oh, I’m sure it has always been “about me” with this guy.

That leaves two other GOP candidates who will reportedly announce in the next couple of weeks, the aforementioned “twice-elected goggle-eyed homunculus hired by Koch Industries to manage their Midwest subsidiary formerly known as the state of Wisconsin,” Governor Scott Walker, who currently Faces a G.O.P. Revolt in Wisconsin, and Ohio Governor John Kasich.

Islamophobic New York congressman Peter King, who was actually the first Republican to officially declare his intention to run for president in 2013, Peter King: ‘I’m running for president’, has yet to make an official announcement of his campaign.

Now that Fox News Fired Sarah Palin (Again), maybe “the Disasta from Alaska” will want to bring some of her “momma bear” crazy to the debate again? Hey, conservative grifters gotta grift.

This leaves us with a GOP Presidential Primary debate stage that could look something like this (h/t DonkeyHotey). 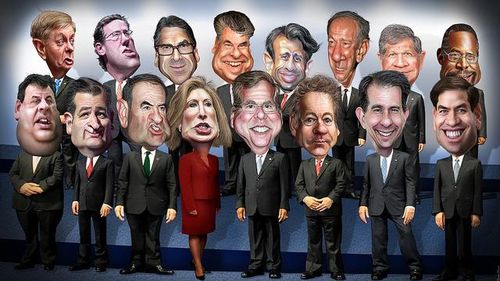