On Thursday, the DOJ went to court to do just that. Trump administration seeks approval from judge to detain immigrant families together:

The Trump administration asked a federal judge in California on Thursday to permit federal agents to detain together those families suspected of illegally entering the country, in the wake of an outcry over the government’s recent practice of separating children from their parents.

The Justice Department filed court papers Thursday seeking a modification to a judge’s order in a long-running court case about how immigrants are detained.

The case, known as Flores v. Sessions, dates back to the Reagan administration, when a 15-year-old girl from El Salvador sued over the conditions of her confinement.

In the case, U.S. District Court judge Dolly M. Gee had previously ruled against the Obama administration over the same issue, finding in 2015 that it had violated the terms of the settlement in the case by detaining mothers and their children in poor conditions.

At the time, the judge ordered such detainees released because of what she called “widespread deplorable conditions” during their time in the custody of Border Patrol agents.

“Under current law and legal rulings, including this court’s, it is not possible for the U.S. government to detain families together during the pendency of their immigration proceedings,” the Justice Department lawyers wrote in their filing. “It cannot be done.”

The inability to detain parents and children together “creates a continued incentive for parents to bring their children on the dangerous journey to the United States and to enter the country illegally,” the Justice Department lawyers argued in their papers. “[T]he emergency currently existing on the southwest border requires immediate action. This court can take such action to help address this urgent problem.”

The Trump administration expects to lose this case. The political strategy here is to shift blame for the humanitarian crisis that they have manufactured onto the “liberal” judges of the Ninth Circuit who have “tied our hands” and won’t allow us to warehouse immigrant families in internment camps on military bases. (Who Is Dolly Gee, the Judge Deciding the Fate of Trump’s Executive Order). We are forced to separate children from their “criminal” parents — many of whom are here lawfully applying for asylum. (This is also illegal under the Flores Settlement Agreement). Just watch our Twitter-troll-in-chief’s twitter feed on this.

The current “emergency” was manufactured by the Trump administration by violating the law for the political purpose of generating enthusiasm among “Dear Leader’s” xenophobic white nationalist racist cult in an election year. There’s no immigration crisis, and these charts prove it:

The humanitarian crisis involving immigrant children at the U.S.-Mexico border has, among other things, laid bare a number of falsehoods driving much of the Trump administration’s immigration agenda.

The administration has said that the country is in danger of being “overwhelmed” by “massive increases in illegal crossings” that will bring “horrible crime,” “unbelievably great taxpayer expense” and the loss of American jobs.

None of those claims are true.

Below, we’ve compiled some of Wonkblog’s coverage highlighting the latest data and research shedding light on erroneous beliefs about immigration in the United States.

Myth No. 1: Undocumented immigrants are flooding into the United States

In fiscal 2017, apprehensions of immigrants entering illegally at the Southwest border (a proxy for the total number of individuals crossing the border illegally) hit their lowest level in 46 years.Apprehensions are up by about 12 percent in the current fiscal year. If that pace holds up for the rest of the year, we’ll close out 2018 with the fourth-lowest number of illegal-immigration apprehensions in at least four decades.

The reality is just the opposite: A large body of social-science literature has demonstrated that immigrants, legal or otherwise, commit crime at lower rates than native-born Americans. This chart, using Texas Department of Public Safety data compiled by the libertarian Cato Institute, illustrates this quite clearly.“

Although ardent skeptics may remain unconvinced,” another recent study concluded, “the weight of the evidence presented here and in supporting work challenges claims that unauthorized immigration endangers the public.”

Myth No. 3: Immigrants take our jobs and lower our wages

This is a more complicated question than the previous two. The best information comes from a massive summary of the literature published by the National Academies of Sciences, Engineering and Medicine (NASEM) in 2017. “Most studies find little effect of immigration on the employment of natives,” that report concluded. In other words, no, immigrants are not taking your jobs.

Myth No. 4: Immigrants are a drain on the economy

In fact, research by the Cato Institute has found that poor noncitizens are considerably less likely than poor native-born Americans to use public assistance programs.Not only that, but “the average value of benefits per recipient is almost always lower than for the native-born,” the report found. “For Medicaid, if there are 100 native-born adults, the annual cost of benefits would be about $98,400, while for the same number of noncitizen adults the annual cost would be approximately $57,200.”

The NASEM report found that, in the long run, the typical immigrant and that person’s descendants will pay about $259,000 more in taxes than they receive in government benefits.

The report’s bottom line, based on its analysis of hundreds of economic studies: “Immigration is integral to the nation’s economic growth. The inflow of labor supply has helped the United States avoid the problems facing other economies that have stagnated as a result of unfavorable demographics, particularly the effects of an aging workforce and reduced consumption by older residents. In addition, the infusion of human capital by high-skilled immigrants has boosted the nation’s capacity for innovation, entrepreneurship and technological change.”

Here’s what we can say in conclusion. Current rates of illegal immigration remain extremely low by historic standards. Legal and undocumented immigrants are significantly less likely to commit most crimes than native-born citizens, making them a net benefit to public safety. The research shows that immigrants are not taking jobs away from U.S. natives, and their impact on wages appears to be small to nonexistent, particularly across the long term.

Immigration appears to be crucial to economic growth, particularly as native-born fertility rates decline.[See, Fewer Births Than Deaths Among Whites in Majority of U.S. States]. More immigration leads to a stronger economy, particularly on the long-term horizon.

But here’s the thing: the worshippers in the Cult of Donald Trump and his state propaganda machine at the fact-free world of FAUX News aka “Trump TV,” and the conservative media entertainment complex writ large, don’t give a damn about the facts, they are the ones who manufactured these immigration myths. They are all about encouraging white resentment and the fear and loathing of “others” as a political strategy. Republicans Dislike Separating Families. But They Like ‘Zero Tolerance’ More. Recent polling shows that Trumpkin Republicans are the only demographic group who support Trump’s cruel and inhumane immigration policy.

In the latest developments, the U.S. Prepares Housing Up to 20,000 Migrants on Military Bases in internment camps. This is turning our military into jailers. In addition, the Defense Dept. to Help Justice Dept. Prosecute Immigration Cases: Twenty-one lawyers for the Defense Department “will work full-time, assisting in prosecuting reactive border immigration cases, with a focus on misdemeanor improper entry and felony illegal re-entry cases,” the department said in a statement. The assignment is to last for about six months.

I’m pretty sure that using our military to enforce domestic laws as prosecutors and jailers is a violation of the Posse Comitatus Act. There is likely little or no legal precedents on this subject.

In any event, three U.S. Senators have raised objections to JAG officers being reassigned to the Department of Justice as prosecutors in immigration courts. Iowa Sen. Joni Ersnt ‘deeply troubled’ by use of military lawyers for immigration cases:

“These 21 JAGs are being directed to practice wholly outside of their training, within the vast and complex immigration arena,” Ernst, a Republican, said in a letter to Defense Secretary James Mattis. The letter about the military lawyers, also knowns as Judge Advocates or JAGs, was co-signed by Sens. Kristen Gillibrand, D-NY, and Patrick Leahy, D-VT.

The letter said that the senators are “deeply troubled” by the Defense Department’s decision to send 21 military attorneys to handle immigration matters.

“Pulling 21 trial counsel from military courtrooms to prosecute immigration cases is an inappropriate misapplication of military personnel,” they wrote. 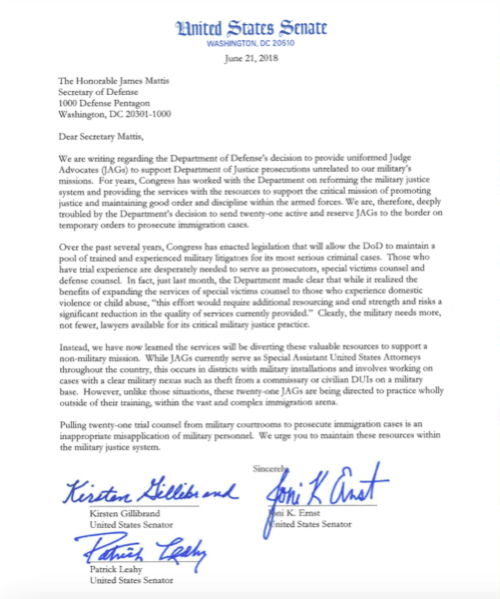 Arizona Reaction to Joe Biden’s Build Back Better Agenda for the...