What if Trump Really is a Russian Dupe?

Home/AZ Politics/What if Trump Really is a Russian Dupe?
Previous Next

What if Trump Really is a Russian Dupe? 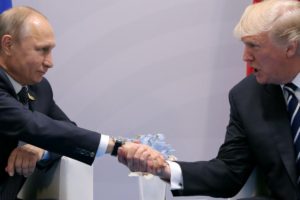 I read a Daily Intelligencer piece by Johnathan Chiat that really plugged all the available facts in the admittedly speculative theory that Trump really is the Russian asset he acts like. I would like to reprint it whole, but that would be stealing. Instead, I’ll give you the lede and you will need to go to their website for the rest:

On June 14, 2016, the Washington Post reported that Russian hackers had broken into the Democratic National Committee’s files and gained access to its research on Donald Trump. A political world already numbed by Trump’s astonishing rise barely took notice. News reports quoted experts who suggested the Russians merely wanted more information about Trump to inform their foreign-policy dealings. By that point, Russia was already broadcasting its strong preference for Trump through the media. Yet when news of the hacking broke, nobody raised the faintest suspicions that Russia wished to alter the outcome of the election, let alone that Trump or anybody connected with him might have been in cahoots with a foreign power. It was a third-rate cyberburglary. Nothing to see here.

The unfolding of the Russia scandal has been like walking into a dark cavern. Every step reveals that the cave runs deeper than we thought, and after each one, as we wonder how far it goes, our imaginations are circumscribed by the steps we have already taken. The cavern might go just a little farther, we presume, but probably not much farther. And since trying to discern the size and shape of the scandal is an exercise in uncertainty, we focus our attention on the most likely outcome, which is that the story goes a little deeper than what we have already discovered. Say, that Donald Trump Jr., Jared Kushner, and Paul Manafort told their candidate about the meeting they held at Trump Tower with a Russian lawyer after they were promised dirt on Hillary Clinton; and that Trump and Kushner have some shady Russian investments; and that some of Trump’s advisers made some promises about lifting sanctions.

But what if that’s wrong? What if we’re still standing closer to the mouth of the cave than the end?