Arizona — OK, the state of Maricopa — was a national disgrace last week with an epic failure on election day for the Presidential Preference Election.  Some voters stood in line for over five hours to vote (which reminds me of the determined souls who stood in the cold for over ten hours in Ohio in 2004, No One Should Have to Stand in Line for 10 Hours to Vote, and the voters who stood in line for over seven hours in Florida in 2012. No One in America Should Have to Wait 7 Hours to Vote; Florida Voting Lines Discouraged 201,000 Voters Statewide). 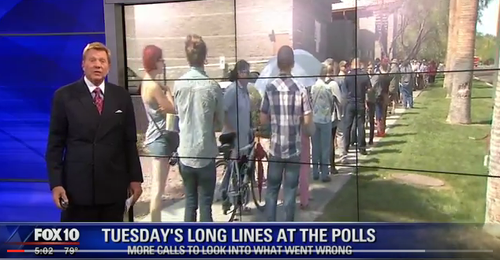 A special Arizona House Elections Committee hearing today will take testimony from Maricopa County Recorder Helen Purcell, and Arizona Secretary of State Michele Reagan will announce the results of her preliminary review before the hearing. Arizona House panel to review election foul-ups. You can bet that the Secretary of State will not name everyone responsible for this epic failure.

John Roberts and the Conservative Activist Justices of the U.S. Supreme Court

Chief Justice John Roberts spent his entire legal career seeking to undermine the Voting Rights Act of 1965. He achieved his life’s goal in 2013 with Shelby County v. Holder. The Election in Arizona Was a Mess:

Arizona has a long history of problems at the ballot box. Until 2013, the Grand Canyon State was one of 16 states required to clear all changes to voting law and procedures with the U.S. Department of Justice, under Section 5 of the Voting Rights Act, because of its history of discriminatory and racist election practices.

The [Section 4 coverage] formula was ruled unconstitutional in the 2013 U.S. Supreme Court decision Shelby County v. Holder, in which an Alabama County lawyer argued that jurisdictions covered by Section 5 “must either go hat in hand to Justice Department officialdom to seek approval, or embark on expensive litigation in a remote judicial venue.” With the court’s ruling, Arizona (and the other states and jurisdictions previously covered by so-called “pre-clearance”) could make changes to voting laws and procedures without federal oversight.

If Arizona was still subject to Section 5 pre-clearance by the U.S. Justice Department, I assure you that the election plan employed by the state of Maricopa last Tuesday would never have been approved.

Kareem Crayton, a political scientist and visiting professor of law at Vanderbilt University, and an expert on voting rights said, Why does it seem like it’s getting harder to vote in Arizona?

If pre-clearance had been in effect, Maricopa County’s plan to open only 60 polling sites would have been subject to federal review to ensure the changes would not impede minorities from voting.

Pre-clearance could have hit the pause button on the county’s plan.

Even if only “sheer negligence” is to blame, that federal backstop of scrutiny may have foreseen that the decision would burden some voters, Crayton said.

“You can’t correct these problems after the fact,” he said. “Even if it (a long wait to vote) is not outright denial, the delay on one level can be denial because people just decide to give up and go home.”

Bruce Adelson worked in the Justice Department from 2000 through 2006. During his tenure as senior trial attorney in the voting section of the Civil Rights division, he dealt with many “pre-clearance” reviews of changes to voting procedures.

Now a consultant on federal compliance, Adelson said he has looked at Phoenix Mayor Greg Stanton’s request that the Justice Department to review whether the county plan disadvantaged minority voters. Avondale City Councilman Lorenzo Sierra also has asked the Justice Department to investigate the lack of polling sites in his city, the population of which is 50 percent Latino and 9 percent Black.

Given the “high profile” of the polling-place issues, Adelson said he would expect a prompt initial review of Stanton’s complaint.

It takes money to run an election, and therein is the source of the problem. State election funding cuts set stage for 60 polling sites:

[In 2014], the Arizona Legislature had cut $4.5 million from the funding it is required to provide for the presidential preference election. It was one of many maneuvers the GOP-controlled Legislature took to balance the budget, and it came over the protests of elections officials statewide.

Although lawmakers and Gov. Doug Ducey earlier this year said they would reimburse the counties the full cost, the money had not appeared by February, when county Recorder Helen Purcell and Elections Director Karen Osborne rolled out their 60-poll plan.

Senate Bill 1486 and House Bill 2567 both call for $6.1 million to make the counties whole. The bills are stalled in the Senate.

Helen Purcell has been Maricopa County Recorder for something like 30 years. Purcell has a long history of problems on election day that she always seems to blame on the voters. Somehow those same voters reelect her anyway.

Supervisors seemed pleased with the plan, with Chairman Paul Hickman noting they had asked the elections officials “to be as frugal as you can.”

Supervisor Steve Chucri lauded the two for their “innovative” plan, which introduced voting centers for the first time to Maricopa County. The centers consolidated the 200 polling sites used in the 2012 preference election and, unlike previous elections where voters had to go to a designated poll near their home, were open to voters from anywhere in the county.

Secretary of State Michele Reagan on Monday touted Maricopa County’s 60-poll plan. Why does it seem like it’s getting harder to vote in Arizona? So clearly Reagan did not find any fault in the 60-poll  plan until after the epic failure on election day. This should cause you to question her judgment as the state’s chief elections official.

Now Reagan will try to convince voters that she is actually concerned and is going to do something about it with a road show. ” Reagan is planning a series of public hearings in the areas most affected by the long lines, and said the information she gathers will help shape future election procedures.” By the time Reagan is done with her road show, the legislature may be done for the year.

The preliminary findings from Secretary of State Michele Reagan after her review of election issues today will not include problems with “Motor-Voter Registration” at the MVD. MVD error might have kicked Arizona voters out of parties:

Voters across Arizona might have lost their party affiliation and been forced to cast provisional ballots in Tuesday’s presidential preference election because of errors at the state Motor Vehicle Division, according to election officials.

A widespread complaint during Tuesday’s voting debacle came from voters who learned records showed they were not registered with a party and therefore were ineligible to vote in the closed primary. Many of these voters, from both the Democratic and Republican parties, claimed decades of party participation.

Some of these voters might have lost their political-party registration when they updated their addresses in person at Motor Vehicle Services, officials said Friday.

“It might have been a clerical error putting that voter in ‘party not designated,'” said Elizabeth Bartholomew, communications manager for the Maricopa County Recorder’s Office Elections Department.

[Individuals] may have mistakenly lost their party affiliation at the MVD if they did not select a party on paper forms used to update addresses, Bartholomew said.

Former Secretary of State Ken Bennett said he was told Friday by a technician who worked on the election system before him that the problem was identified in 2007 and had gone on for two years. Jan Brewer was secretary of state then, before she became governor.

MVD clerks were told at the time to stop noting a voter as “party not designated” if the voter failed to check a party box, Bennett said he was told. Instead, clerks were instructed to leave the registration field blank. If that voter was already registered in the county, the party registration would remain the same.

However, if the voter was new to the county, either after moving from another county or another state, the blank designation would automatically add the voter as “party not designated” because the voter would not have a party registration on file with that county, Bennett said he was told.

That means that since at least 2005, voters across Arizona who were registered with a party in another county and did not check a party box as they updated their address at the MVD could have lost their party registration.

So why doesn’t the MVD do away with the paper voter registration form and clerical errors, and use an electronic form on a computer or pad (like so many medical offices now do), and put a “required field” prompt in the party preference section that does not allow the voter to complete the voter registration form until the voter has affirmatively indicated their party preference? This should not be left to the discretion of MVD employees or election officials.

There is plenty of blame to go around for last Tuesday’s fiasco, and you should note that there was a Republican responsible at every level.

In the end, it comes down to Arizona’s Tea-Publican controlled state legislature and Governor Ducey being unwilling to spend what it takes to bring Arizona’s voter registration and election systems into the 21st Century.