No matter, “that’s our story and we’re sticking to it,” because its a fan fave at FOX News aka Trump TV. The elderly shut-ins (our target demographic) eat this shit up!

Dept. of Justice Spokesperson Kerri Kupec says Bill Barr has authorized the opening of an investigation into “unmasking” that took place before, during, and after the 2016 presidential election by the Obama administration. It is the latest move by the Attorney General to further politicize the DOJ in an effort to re-write history as President Donald Trump would like it told.

Barr has tasked John Dash, a U.S. Attorney in Texas, with conducting the investigation.

Kupac made the announcement on Fox News Wednesday night, telling host and frequent Trump advisor Sean Hannity that Barr has concerns about the “frequency” and the “motivation” of unmasking requests.

Hannity got so excited he peed himself just a little.

“When you’re looking at unmasking as part of a broader investigation,” Kupac told Hannity, “who was unmasking whom, can add a lot to our understanding about motivation and big picture events.”

Unmasking, the act of requesting to learn the identity of a U.S. individual caught up in Intelligence Community telephone intercepts of foreign actors, is perfectly legal, which Kupac noted. 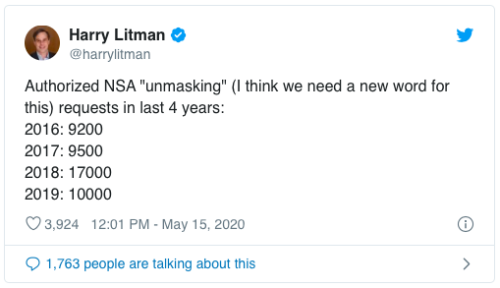 But Sean Hannity painted a far different picture for his Fox News viewers.

Hannity could have actually done some basic research to get actual facts.

It’s important to note that in administrations that don’t politicize intelligence and turn the Dept. of Justice into a weapon for the president’s re-election, any announcement of a major investigation would be made in a non-partisan environment like the DOJ’s press briefing room, and all regular media outlets would be included.

It would not be an “exclusive” with propagandist Sean Hannity on state TV, er, Trump TV.

Another day, another U.S. attorney retasked by William Barr to follow up on a nonexistent “crime.” This time, Barr has taken John Bash, the U.S. attorney in the Western District of Texas, and given him the task of checking out “unmasking” of people whose identity was concealed in intelligence documents. These claims that members of the Obama White House were inappropriately unmasking citizens who appeared in foreign intelligence have been part of the Republican narrative since the beginning of Donald Trump’s Russia scandal.

There are only two real problems with this investigation: First, unmasking isn’t a crime. It happens all the time, and in the case of an investigation into cooperation between U.S. citizens and Russian diplomats, it was often critical that the name of the person involved be revealed. Second, the name most often brought up in connection with unmasking—that of former Trump National Security Advisor and recent beneficiary of Barr’s largess, Michael Flynn—was never masked in the first place.

At this point, Barr has sent so many U.S. attorneys scurrying after whatever bee is currently trapped in Trump’s hair-bonnet that it’s an open question as to whether any are left to deal with actual crimes.

Unmasking is one of those things that comes up again and again. They’re the allegations that caused Devin Nunes to leap from an Uber in transit and go skulking about the White House basement with a pair of sources that turned out to be pals of Michael Flynn. Nunes went on to make unmasking—and in particular Flynn’s unmasking—the centerpiece of the all-Republican report he hustled out before the 2018 election put Democrats in charge of the House.

Most recently, Lindsey Graham had revived the subject of unmasking with demands to know who was behind the reveal of Flynn’s name. But this move turned out to be about as well-planned and executed as everything else Graham has ever done, when it turned out that Flynn’s name wasn’t hidden in the first place.

But of course, there’s no level of fact-freeness that sufficient for Trump, or for the right-wing outlets that have continued to pump that unmasking handle as a means of generating more fake “Obamagate” headlines and fundraising appeals. So, as The Washington Post reports, Barr is now sending Bash in an effort that not even Barr seems to find all that exciting.

As Barr’s spokeswoman Kerri Kupec told Fox News: “The attorney general determined that certain aspects of unmasking needed to be reviewed. We know that unmasking inherently isn’t wrong, but . […] can be problematic.” Well that’s certainly … thrilling. And totally worth starting up yet another special counsel. And hey, it’s not like there’s an inspector general handy to point out a complete waste of time, money, and resources.

It doesn’t help that both the House Intelligence Committee under Nunes and the investigation of special counsel Robert Mueller already looked into issue of unmasking and found nothing. True enough, Nunes’ version of nothing generated a whole series of frantic press conferences … but it was still nothing. A nothing so big that even Nunes ultimately couldn’t manage to fabricate a crime.

And at its core, unmasking remains a technical issue, a detail which—even when explained—is about as likely to resonate with the public as Trump is to display sympathy about the 100,000 Americans who have died so far from his bungled pandemic response.

Of course, that doesn’t mean that The New York Times doesn’t have 1,000 column inches standing by in the final week of October for any statements that Bash or any of William Barr’s other cloud of circling “specials” is ready to produce.

Good point. Former CNN anchor Soledad O’Brien correctly noted recently that the both-siderism and false equivalency reporting in the New York Times Is Failing Us Under Trump. You will note this in the Times reporting that follows.

In a related matter, former deputy attorney general Rod J. Rosenstein will testify at Senator Lindsey “Stonewall” Graham’s Stalinist show trials into “Obamagate,” a reboot of “Spygate.” (Remember, Rosenstein supervised Special Counsel Robert Mueller’s Russia investigation and had to sign off on everything he did). The New York Times reports, Rosenstein to Testify on Russia Inquiry to Panel Led by Trump Ally:

The former deputy attorney general Rod J. Rosenstein will testify before senators next week in a hearing that will give President Trump’s allies a high-profile platform to escalate their attacks on the Russia investigation.

Because Republicans would rather talk about anything other than a global pandemic or an economy at depression level unemployment, you know, the things that matter to people’s lives right now.

Mr. Rosenstein was a key figure in the inquiry. In May 2017, he appointed Robert S. Mueller III to serve as special counsel overseeing the investigation into possible links between Russia’s 2016 election interference and Trump associates. Mr. Trump has long attacked the investigation and other efforts by national security officials to understand Moscow’s election subversion operations as instead a plot to undercut him.

Senator Lindsey Graham, Republican of South Carolina and the chairman of the Judiciary Committee, invited Mr. Rosenstein to appear before the panel and said in a statement that he would be the first of several witnesses to testify about the investigation. Mr. Rosenstein left the Justice Department in May 2019 and was hired this year by the law firm King & Spalding.

Mr. Trump has publicly pressured Mr. Graham to hold hearings on the Russia investigation and interrogate his perceived enemies. [Nixon’s “enemies list,” an abuse of power.] The president has long attacked many of the inquiry’s key figures — including Mr. Mueller, the former F.B.I. director James B. Comey and Mr. Comey’s deputy, Andrew G. McCabe — and he has recently ramped up unsubstantiated accusations that former President Barack Obama masterminded a scheme against him.

Mr. Graham is among the Trump allies who have sought to conflate the broader Russia investigation with narrower aspects of it that an independent watchdog has faulted. Mr. Graham said that Mr. Rosenstein would address findings in a report by the Justice Department inspector general, Michael E. Horowitz, that investigators’ applications to wiretap a former Trump campaign adviser, Carter Page, were riddled with errors and other problems.

The Bottom line: The Horowitz report found that the FBI had a legal “authorized investigative purpose and with sufficient factual predication” to ask for court approval to begin surveillance of Carter Page, a former Trump campaign adviser. Mistakes, but no political bias in FBI probe of Trump campaign: watchdog.

Mr. Rosenstein signed off on one of the renewal applications. But in a statement, he seemed to now be distancing himself from others involved in the Russia investigation. He said that he had learned that “even the best law enforcement officers make mistakes, and that some engage in willful misconduct.”

Attorney General William P. Barr has also chipped away at the results of the investigation. Weeks after being sworn in last year, Mr. Barr said that he would scrutinize its origins, and he has made clear that he believes it was opened without legitimate rationale. He also raised the possibility that members of the Trump campaign were inappropriately spied on, and this month he moved to withdraw the Justice Department’s case against the former national security adviser Michael T. Flynn, who had pleaded guilty to lying to investigators in the Russia inquiry.

Mr. Trump and his allies point to the department’s decision to investigate and prosecute Mr. Flynn as evidence that Obama-era officials sought to undermine the president before he even took office. Republican senators recently released a list of Obama administration officials who, during the presidential transition, asked for the identity of an unnamed American that appeared in National Security Agency intelligence reports. The process, called unmasking, revealed that the American was Mr. Flynn, Mr. Trump’s incoming national security adviser; however, it was unclear what the intelligence reports were about.

The people who requested the unmasking included several former intelligence officials who were vocal critics of Mr. Trump, including John O. Brennan, the former C.I.A. director, and Mr. Comey, as well as former Vice President Joseph R. Biden Jr., the presumptive Democratic presidential nominee. After the names were made public, Mr. Trump accused the Obama administration of trying to undermine him.

Unbelievably, the Times report entirely fails to mention this critical fact for context: NBC News and the Washington Post reported that Flynn’s name was never ‘masked’ in FBI report on phone call with Russian:

In a blow to GOP efforts to create a cloud of scandal around so-called unmasking, two sources familiar with the matter told NBC News that Michael Flynn’s name was never redacted from an FBI intelligence report about his phone conversation with the Russian ambassador to the U.S.

The lack of masking was first reported in The Washington Post:

[I]t was the FBI, not the National Security Agency, that wiretapped Ambassador Sergey Kislyak’s calls — a common and legal practice. And Flynn’s name was never redacted in its report:

“When the FBI circulated [the report], they included Flynn’s name from the beginning” because it was essential to understanding its significance, said a former senior U.S. official, who spoke on the condition of anonymity to describe sensitive intelligence. “There were therefore norequests for the unmasking of that information.”

Flynn’s name was unmasked in other intelligence reports about other conversations he had with foreigners, but not the one about the Dec. 29, 2016, phone call that got him in legal trouble, the sources said.

That’s a big effin’ deal Times, one would think you would include this in your “its scandalous” (its not) reporting. Seriously, you have got to do better than this.