Women are increasingly resorting to DIY abortions? Don’t worry, GOP politicians have a remedy for that.

Home/Civil & Human Rights, COVID-19 & Healthcare/Women are increasingly resorting to DIY abortions? Don’t worry, GOP politicians have a remedy for that.
Previous Next

Women are increasingly resorting to DIY abortions? Don’t worry, GOP politicians have a remedy for that.

Big kudos to New York Times columnist Seth Stephens-Davidowitz for his revealing report on the explosion in interest in black market abortion procedures, based on internet searches, in the aftermath of a plethora of restrictions passed by states often under the (ironic) guise of “safety”. 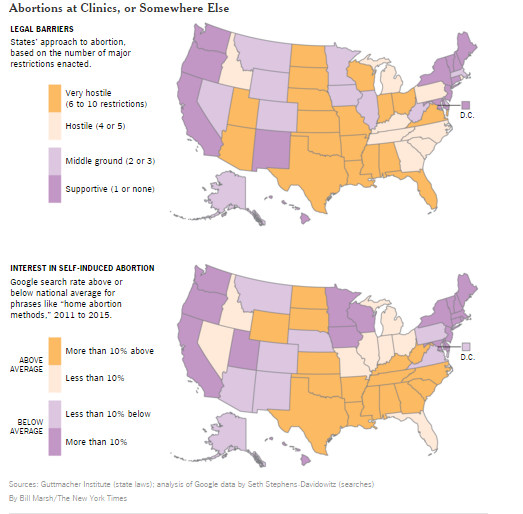 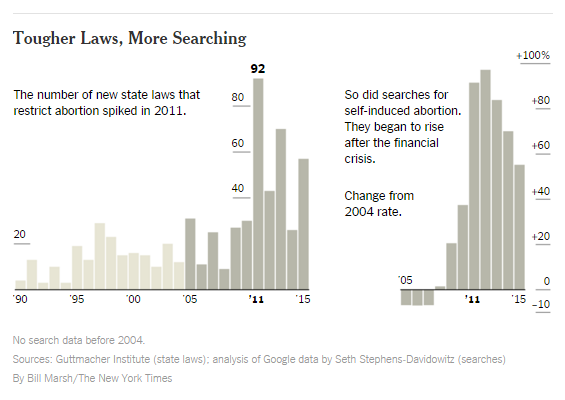 Google searches can help us understand what’s really going on. They show a hidden demand for self-induced abortion reminiscent of the era before Roe v. Wade.

This demand is concentrated in areas where it is most difficult to get an abortion, and it has closely tracked the recent state-level crackdowns on abortion.

In 2015, in the United States, there were about 119,000 searches for the exact phrase “how to have a miscarriage.” There were also searches for other variants — “how to self-abort” — and for particular methods. Over all, there were more than 700,000 Google searches looking into self-induced abortions in 2015.

For comparison, there were some 3.4 million searches for abortion clinics and, according to estimates by the Guttmacher Institute, there are around one million legal abortions a year.

While Stephens-Davidowitz emphasizes that it is difficult to discern whether or how often women are resorting to desperate measures to end pregnancies, the close tracking of state restrictions to internet searches is stark. It’s hard to believe the much higher number of searches in states deemed “hostile” to safe, legal abortion are driven by idle curiosity.

Anti-choice activists have their glib denials that back alley or self-induced illegal abortions will return with abortion bans down pat. Witness the head-spinning way this anti-choice site simultaneously denies, admits, and minimizes the prevalence of black market abortions under bans, while also deflecting with fallacious claims about legal abortion.

In their more honest moments, anti-choicers fully acknowledge that illegal abortions take place when the procedure is banned outright or restricted heavily. And they also make it abundantly clear how they intend to deal with that.

Legislators in Oklahoma, one of the “hostile” states to abortion with a high level of searches for DIY methods, have come right out with how they plan to handle it:

In a move that is unprecedented nationwide, an Oklahoma Senator has introduced a bill that would criminalize abortion as first-degree murder.

The bill defines abortion as “the use or prescription of any instrument, medicine, drug or any other substance or device to intentionally kill an unborn human being” and provides the unborn with protection from the moment of conception.

But, you know, I guess that isn’t nearly as exciting as those titillating “baby parts” videos were! Coverage of the bogus Planned Parenthood smear by the “Center For Medical Progress” was splashed all over the place last summer. More recently, Arizona Republic reporters were suckers for anti-choicers peddling a dubious “fetus born alive!” story in Phoenix. So thrilling!

The prospect of women ending pregnancies via desperate illicit measures and being charged with first degree murder for it? Meh. Stop exaggerating, you silly hysterical pro-choicers!