More than 17 million new jobless claims have been filed in the past four weeks, a rapid and unprecedented escalation in unemployment in the United States since the week President Trump declared a national emergency because of the novel coronavirus.

The 17 million figure includes new reporting from the Labor Department that even more people filed for unemployment in the prior week, pushing the jobless claims up during the week ending March 28 to a record 6.9 million, up from 6.6 million. 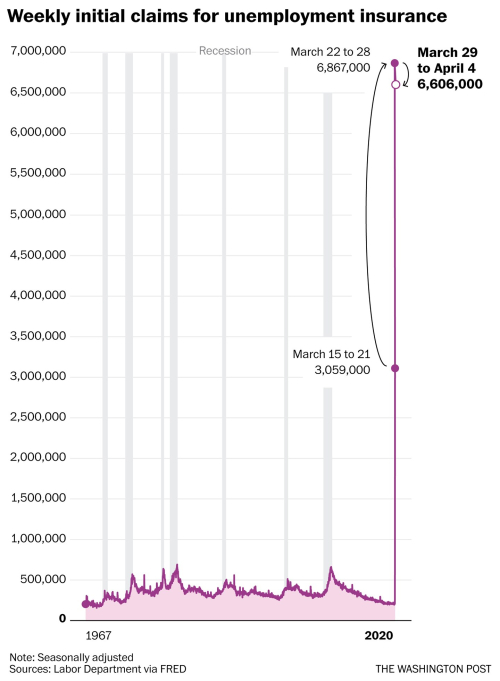 Top government and health officials have ordered sweeping closures of businesses in an effort to fight the deadly coronavirus by keeping workers and customers at home, but the side effect has been a massive rise in unemployment. Janet L. Yellen, one of the world’s top economists, said the U.S. unemployment rate has jumped to at least 12 or 13 percent already, the worst level of joblessness the nation has seen since the Great Depression.

“It looks like the unemployment rate is headed to 15 percent,” said Chris Rupkey, chief financial economist at MUFG Bank, in a note to clients. “This isn’t a recession, it’s the Great Depression II.”

The stock market surge came after the Federal Reserve unveiled over $2 trillionin new lending to businesses of all sizes, as well as struggling city and state governments. Fed Chair Jerome H. Powell said the nation’s top priority is fighting the pandemic and caring for the ill, but the central bank is doing whatever it takes to provide economic relief.

“The Fed’s role is to provide as much relief and stability as we can during this period of constrained economic activity, and our actions today will help ensure that the eventual recovery is as vigorous as possible,” Powell said.

Relief has been slow to reach workers losing their jobs as states have been overwhelmed with claims.

On top of the Fed’s historic actions, the federal government has been scrambling to get checks and loans into the hands of workers and companies to buoy employment and keep paychecks flowing, but job losses have continued to build, even after Congress passed a historic $2 trillion relief package. Businesses small and large are struggling to get loans. As companies run out of cash, they are cutting workers and telling them to file for unemployment benefits. But many states have been slow to distribute money.

It takes two to three weeks to process someone’s unemployment claim in normal times. Since Trump declared a national emergency on March 13, state unemployment systems have been overrun, causing even longer delays.

As unemployment checks are slow to arrive, people are turning to whatever aid they can find. Modern day “bread lines” have started appearing in cities like Orlando, San Diego, Pittsburgh and Cleveland where thousands lined up for free food. The slow release of funds in the United States is a marked contrast from Denmark where the government is paying workers 75 percent of their salaries during the pandemic, and Canada, which vowed to get money to workers in 10 days or less.

“There were already hurdles to accessing unemployment benefits before the pandemic hit. Many states had done everything they could to reduce access to benefits. Well, now we are seeing the result,” said Michele Evermore, a senior policy analyst at the National Employment Law Project.

Economists say the millions of workers likely to file for unemployment in April will strain America’s safety net programs even more. They are urging companies to furlough workers instead of doing a full layoff. A furlough usually allows workers to keep their health insurance and return quickly when business resumes. But many companies have cut ties entirely, leaving workers with no income and bills piling up in the midst of a pandemic.

Unemployment benefits typically cover less than half a worker’s salary, but the $2 trillion relief package passed by Congress directed states to give an extra $600 a week to people out of work, including self-employed and gig workers. The Trump administration issued rules Sunday night for states to begin disbursing that extra money, but state officials say it will take time to process all the applications. Many states have not even set up a process yet to handle applications from self-employed workers like hairdressers and Lyft drivers.

Labor economists have urged Congress to give more money to states to help strengthen staffing and technology in unemployment offices. States with better websites have tended to move faster, as have states where the revenue department shares data with the unemployment office to make it easier to verify past income.

The Internal Revenue Service is expected to begin processing stimulus payments and eligible taxpayers could receive deposits as soon as early next week, the Treasury Department, which oversees the agency, told Newsweek. When Are Stimulus Checks Being Deposited Into Bank Accounts?

According to an internal IRS memo obtained by The Washington Post, the tax agency is planning “to generate electronic checks” today, though it will apparently take several days before those payments are reflected in account balances. The checks are part of the recent $2 trillion relief package designed to stimulate an economy stalled by the global coronavirus pandemic.

Direct deposits, the most immediate method, will be used for taxpayers whose banking information the IRS has on file. According to IRS statistics, 82 percent of taxpayers received refunds through direct deposit in 2019.

However, this still leaves tens of millions of taxpayers whose banking information is not readily accessible to the IRS without the expedient relief that Congress intended.

The IRS anticipates finalizing 60 million payments through direct deposit over the next several days, according to a memo prepared by the staff of the House Ways and Means Committee, which has jurisdiction over tax issues.

Social security beneficiaries with direct deposit information on file, who have not filed tax returns over the past two years, will receive their deposits in the second tranche of payments directly afterward.

The IRS is developing a portal for taxpayers to quickly provide the agency with direct deposit information for filers who traditionally receive their refunds via check, to help facilitate payments. It is expected to be launched by the end of April, or soon after.

Steven Mnuchin, the secretary of the Treasury Department, has said that many eligible Americans should expect to receive stimulus payments in the coming weeks.

Paper checks are not expected to be issued until the beginning of May, according to the Ways and Means Committee memo. And physical payments will be mailed “at a rate of about 5 million per week,” starting with the lowest income earners. The IRS believes that it could take until mid-September for all of these payments to reach their recipients.

While most Americans will receive a coronavirus stimulus check based on their tax returns, the IRS is urging certain groups that do not typically file taxes to do so as soon as they can in order to receive a payment.

The 10 million Americans who do not file returns because they have little to no income and some individuals with disabilities should file a simple tax return now to receive a payment, according to the IRS. You can use tax preparation service TurboTax’s free stimulus registration site to fill out a simple tax return if you do not typically file a tax return.

Despite some initial confusion, the IRS confirmed that retirees who receive Social Security or Railroad Retirement benefits do not need to do anything to receive their payments, they will receive them automatically, just as they would their normal benefits payment.

The economic impact payments, as the IRS is calling them, will be available through the end of 2020, so if you can’t file right away, you still have a few months to do so. But you won’t receive a stimulus payment until you do.

IRS.gov/Coronavirus will soon provide information instructing people in these groups on how to file a 2019 tax return with simple, but necessary, information including their filing status, number of dependents and direct deposit bank account information.

UPDATE: The new web-based tool from the IRS is here!

The IRS said registration takes only a few minutes to complete. Go to irs.gov and look for “Non-Filers: Enter Payment Info Here.” Then provide some basic information about yourself including name, address, Social Security number and information on any dependents. The IRS will use this to confirm eligibility, calculate your stimulus payment and process it.

If you supply bank-account information, that will allow the IRS to deposit your payment directly. Otherwise, it will be mailed, with a long delay and with less security.