For months, the Trump administration and the Republican-controlled Congress have been trying every trick in the book to eliminate the Affordable Care Act (ACA or “Obamacare”). Multiple repeal and replace bills died during the summer of 2017, thanks to public outcry against kicking millions of Americans off of health insurance while giving tax breaks and sweetheart deals to insurance companies and others. Overwhelmingly, Americans said: We want a health insurance system that is fair, affordable, and wide-ranging in its coverage.

Fast forward to November 2017, and the Republicans are at in again. Rather than hiding tax cuts for the rich in health insurance bills (as they tried last summer), they are hiding an ACA poison pill in the middle of a tax cut bill for the uber-rich.

Do the American people want to go back to market-driven health insurance with high costs and limited access to care and drugs? Do they want millions of adults to lose their insurance altogether– with the fight to rollback Medicaid expansion? Do they want poor children to lose their insurance– with the pending sunset of KidsCare? No! Citizen backlash on social media and in the streets has been strong and swift. In Southern Arizona, protesters have dogged CD2 Congresswomen Martha McSally, who voted for Republican plans to eliminate the ACA, kick millions of Americans off of health insurance, cut taxes for big corporations and the uber-rich, and raise taxes on the rest of us. Do Tucsonans agree with McSally and the Republican Party?

What Do Tucsonans Want?

The theme running through many of the personal stories was the ever-increasing costs– cost of insurance, cost of care, or cost of drugs. Several people had stories about spending frustrating hours searching insurance company websites and making telephone calls to determine what their insurance covers. Frustrated physicians complained about limited drug choices for their patients and about surprise billing.

Although there was tepid support for the ACA, forum attendees overwhelming rejected Republican repeal plans:

When asked what type of insurance system they prefer:

How did Tucsonans describe what they wanted? 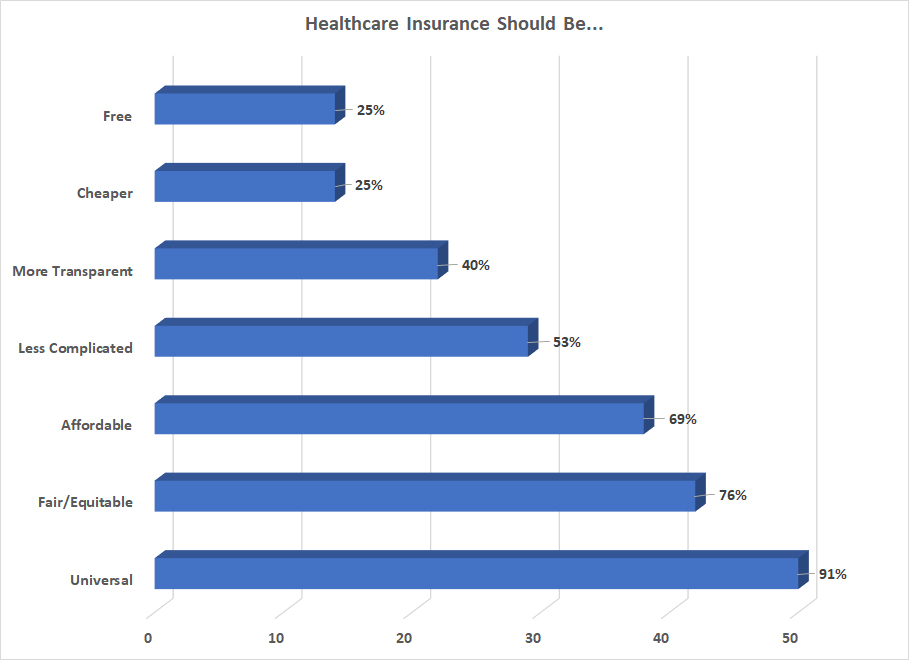 Choosing from a list of adjectives, the survey respondents said they want a system that is universal (91%) and fair/equitable (76%). Any plan that leaves millions of American adults and children without healthcare insurance is not universal, fair or equitable.

Regarding how satisfied people are with their current insurance, the most satisfied consumers were on Medicare, and several of them had Medicare + an employer benefit. The least satisfied with cost of their insurance were also least satisfied overall.

This is just a snippet of the opinions and information that we collected at the healthcare forum. Stay tuned for video stories and more.

Just a few days after the 200 Stories: Tucson Healthcare Forum, I was in my Phoenix Legislative office with a couple of insurance lobbyists. I mentioned the forum to them and said that we heard a lot of complaints about cost.

One of the lobbyists leaned back in his chair and said, “American consumers just have to get used to high costs and high deductibles because that is where the industry is going. And it won’t work any other way.”

I looked up from my notes and said, “It works pretty well in Europe without high costs and high deductibles.”

Seriously, as a country, we can do better.

Many thanks to the people and groups who helped organize or publicize this event: