A conservative Cassandra has a warning for the GOP in 2016

A conservative Cassandra has a warning for the GOP in 2016

While channel surfing during commercial breaks in Monday Night Football, I ran across a segment on The Last Word with Lawrence O’Donnell in which he discussed this piece (below) by Chris Ladd, who writes the “GOPlifer” column at the Houston Chronicle.

Mr. Ladd’s analysis is very good so far as it goes with respect to presidential elections and the presidential electorate. I would add the caveats, however, that the candidates do still matter, and the issues that the media chooses to fixate on during an election also matter.

Two years ago could anyone have predicted that media hysteria and fear mongering over Ebola would have played a role in the 2014 midterm election? No one could. The future is unpredictable — economic crises, wars, terrorism, natural disasters, etc. Anything can happen.

Democrats still have a problem with midterm election drop-off among its core constituencies, and this affects the election of governors and state legislatures. It also affects congressional seats.

I have previously posted about The Two Americas: Urban Versus Rural (the graphics have been corrupted since the blog conversion), in which what I like to call the “big empty” — vast tracts of sparsely populated areas where few people live — is where Republicans predominate, a point Mr. Ladd acknowledges. He does not mention, however, that this gives the GOP over-representation in the U.S. Senate, where  blue California (pop. 38,332,521) has precisely the same number of senators as red state Wyoming (pop. 582,658).

I would also caution that if the GOP is electorally “locked out” of the presidency, they will systematically begin to shift the balance of power from the Unitary Executive Theory under “President” Dick Cheney, to reasserting the powers of Congress vis-à-vis the chief executive. I think we have already seen this with the unprecedented attempt by the GOP to delegitimize the presidency of Barack Obama, who won election twice by electoral landslides.

Anyway, this conservative Cassandra has a warning for Republicans that the GOP wave in 2014 portends a disaster in the 2016 election. The missing story of the 2014 election – GOPlifer:

Few things are as dangerous to a long term strategy as a short-term victory. Republicans this week scored the kind of win that sets one up for spectacular, catastrophic failure and no one is talking about it.

What emerges from the numbers is the continuation of a trend that has been in place for almost two decades. Once again, Republicans are disappearing from the competitive landscape at the national level across the most heavily populated sections of the country while intensifying their hold on a declining electoral bloc of aging, white, rural voters. The 2014 election not only continued that doomed pattern, it doubled down on it. As a result, it became apparent from the numbers last week that no Republican candidate has a credible shot at the White House in 2016, and the chance of the GOP holding the Senate for longer than two years is precisely zero.

For Republicans looking for ways that the party can once again take the lead in building a nationally relevant governing agenda, the 2014 election is a prelude to a disaster. Understanding this trend begins with a stark graphic. 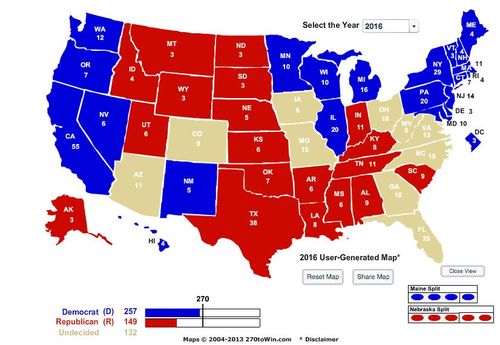 The Blue Wall is block of states that no Republican Presidential candidate can realistically hope to win. Tuesday that block finally extended to New Hampshire, meaning that at the outset of any Presidential campaign, a minimally effective Democratic candidate can expect to win 257 electoral votes without even trying. That’s 257 out of the 270 needed to win.

Arguably Virginia now sits behind that wall as well. Democrats won the Senate seat there without campaigning in a year when hardly anyone but Republicans showed up to vote and the GOP enjoyed its largest wave in modern history. Virginia would take that tally to 270. Again, that’s 270 out of 270.

This means that the next Presidential election, and all subsequent ones until a future party realignment, will be decided in the Democratic primary. Only by sweeping all nine of the states that remain in contention AND also flipping one impossibly Democratic state can a Republican candidate win the White House. What are the odds that a Republican candidate capable of passing muster with 2016 GOP primary voters can accomplish that feat? You do the math.

By contrast, Republicans control a far more modest Red Fortress, which currently amounts to 149  electoral votes. What happened to that fortress amid the glory of the 2014 “victory?” It shrunk yet again. Not only are New Hampshire and probably Virginia now off the competitive map, Georgia is now clearly in play at the Federal level. This trend did not start in 2014 and it will not end here. This is a long-term realignment that been in motion for more than a decade and continues to accelerate.

The biggest Republican victory in decades did not move the map. The Republican party’s geographic and demographic isolation from the rest of American actually got worse.

A few other items of interest from the 2014 election results:

– Republican Senate candidates lost every single race behind the Blue Wall. Every one.

– Behind the Blue Wall there were some new Republican Governors, but their success was very specific and did not translate down the ballot. None of these candidates ran on social issues, Obama, or opposition the ACA. Rauner stands out as a particular bright spot in Illinois, but Democrats in Illinois retained their supermajority in the State Assembly, similar to other northern states, without losing a single seat.

– Republicans in 2014 were the most popular girl at a party no one attended. Voter turnout was awful.

– Democrats have consolidated their power behind the sections of the country that generate the overwhelming bulk of America’s wealth outside the energy industry. That’s only ironic if you buy into far-right propaganda, but it’s interesting none the less.

– Vote suppression is working remarkably well, but that won’t last. Eventually Democrats will help people get the documentation they need to meet the ridiculous and confusing new requirements. The whole “voter integrity” sham may have given Republicans a one or maybe two-election boost in low-turnout races. Meanwhile we kissed off minority votes for the foreseeable future.

– Across the country, every major Democratic ballot initiative was successful, including every minimum wage increase, even in the red states.

– For only the second time in fifty years Nebraska is sending a Democrat to Congress. Former Republican, Brad Ashford, defeated one of the GOP’s most stubborn climate deniers to take the seat.

– Almost half of the Republican Congressional delegation now comes from the former Confederacy. Total coincidence, just pointing that out.

– In Congress, there are no more white Democrats from the South. The long flight of the Dixiecrats has concluded.

– And that “Republican wave?” In Congressional elections this year it amounted to a total of 52% of the vote. That’s it.

– Republican support grew deeper in 2014, not broader. For example, new Texas Governor Greg Abbott won a whopping victory in the Republic of Baptistan. That’s great, but that’s a race no one ever thought would be competitive and hardly anyone showed up to vote in. Texas not only had the lowest voter turnout in the country (less than 30%), a position it has consistently held across decades, but that electorate is more militantly out of step with every national trend then any other major Republican bloc. Texas now holds a tenth of the GOP majority in the House.

– Keep an eye on oil prices. Texas, which is at the core of GOP dysfunction, is a petro-state with an economy roughly as diverse and modern as Nigeria, Iran or Venezuela. It was been relatively untouched by the economic collapse because it is relatively dislocated from the US economy in general. Watch what happens if the decline in oil prices lasts more than a year.

– For all the talk about economic problems, for the past year the US economy has been running at ’90’s levels. Watch Republicans start touting a booming economy as the result of their 2014 “mandate.”

– McConnell’s conciliatory statements are encouraging, but he’s about to discover that he cannot persuade Republican Senators and Congressmen to cooperate on anything constructive. We’re about to get two years of intense, horrifying stupidity. If you thought Benghazi was a legitimate scandal that reveals Obama’s real plans for America then you’re an idiot, but these next two years will be a (briefly) happy period for you.

What are we getting from Republicans? Climate denial, theocracy, thinly veiled racism, paranoia, and Benghazi hearings. Lots and lots of hearings on Benghazi.

It is almost too late for Republicans to participate in shaping the next wave of our economic and political transformation. The opportunities we inherited coming out of the Reagan Era are blinking out of existence one by one while we chase so-called “issues” so stupid, so blindingly disconnected from our emerging needs that our grandchildren will look back on our performance in much the same way that we see the failures of the generation that fought desegregation.

Something, some force, some gathering of sane, rational, authentically concerned human beings generally at peace with reality must emerge in the next four to six years from the right, or our opportunity will be lost for a long generation. Needless to say, Greg Abbott and Jodi Ernst are not that force.

“Winning” this election did not help that force emerge. This was a dark week for Republicans, and for everyone who wants to see America remain the world’s most vibrant, most powerful nation.

The problem for a Cassandra is that their prophecies are not believed.