Who is Christopher Butts?

Who is Brian James Mackiewicz?

They both represent a Culture of Corruption, Cover-Ups, and Inappropriate Sexual Behavior that was tolerated for Some while Jerry Sheridan was Joe Arpaio’s Number Two.

They were both employed in Joe Arpaio and Jerry Sheridan’s Maricopa County Sheriff Office.

They, like Sheridan and Arpaio, were both accused of corrupt behavior.

They were also both guilty of inappropriate behavior towards women on and off duty during the time when they were supposed to be protecting the people.

Butts, who was married to Sheridan’s niece while he worked for the Maricopa County Sheriff’s Office, is awaiting trial in both Pinal and Maricopa County after being arrested for soliciting sex with a minor.

Jerry Sheridan wants to become the next Maricopa County Sheriff.

He was Joe Arpaio’s number two as the Deputy Chief of the Maricopa County Sheriffs Office. That means he was the Chief Operating Officer who oversaw all issues for Arpaio.

This is a person that:

Sheridan and the people who worked under him who left when Paul Penzone became Sheriff are probably not the individuals the people in Maricopa want in a law enforcement position ever again.

What Court and Personnel Documents Say?

There are several documents that show that both Mr. Butts and Mr. Mackiewicz engaged in both corruption and inappropriate sexual contact with women.

While there is no documentation that Chief Deputy Sheridan influenced the disciplinary process on Mr. Butts, there is that he, and Arpaio, did so with Mackiewicz and the patterns regarding both are similar.

Documents (please see links to the documents below) furnished by the Maricopa County Sheriffs Department shows Christopher Butts, while working for the department and married to Sheridan’s niece, was disciplined for: 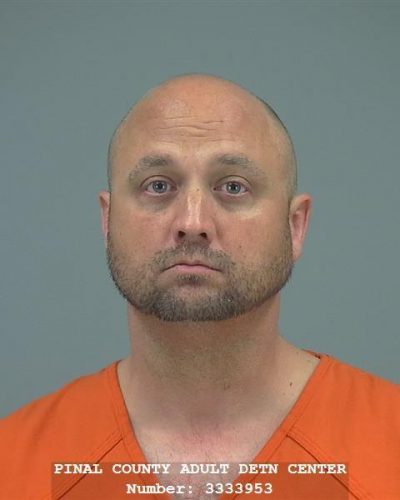 Amazingly, as the documents show, Butts was not fired for any of these incidents. He did receive reprimands and brief suspensions. He was even transferred to another division and, astoundingly, later promoted. It would not be until 2014 that he would be fired (in a 240-page report) for lying about whether he worked one day during a performance review.

Abandoning his post and neglecting his duties do not rate dismissal.

Inappropriate contact with a woman who he had issued a speeding warning to does not warrant job termination.

Not conducting himself according to the codes of conduct for the Maricopa County Sheriff’s Department did not end his stay in the department.

He even received a promotion.

Lying about working one day during a performance review gets him shown out the door.

What kind of culture was Sheridan overseeing when he was the Deputy Chief directly under Joe Arpaio?

His direct involvement in the case of Brian James Mackiewicz is more apparent, documented, and further demonstrates the culture of corruption, coverups, and permitting inappropriate sexual behavior. 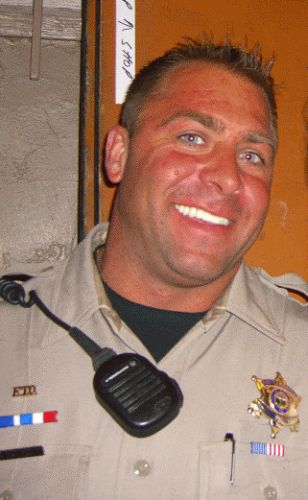 Court documents  (please see link below) from Melendres vs Arpaio in May 2016 show that Joe Arpaio and Jerry Sheridan committed corrupts act in their positions as Sheriff and Chief Deputy.

The court also specifically dealt with the matter of Mackiewicz and investigations he conducted for Arpaio in Seattle These matters included:

The judge overseeing that matter, G. Murray Snow, found that Sheridan and others engaged in corruption when:

While Judge Snow found Sheridan in contempt, Arpaio’s number two did not face criminal charges because the statute of limitations had passed.

Still, not exactly the qualifications or attributes voters are looking for in one of the top law enforcement officials in the county.

In October 2016, the Arizona Attorney General’s Office, citing not enough evidence, did not charge Mackiewicz for “padding his overtime hours” while “investigating” in Seattle.

In 2018, Sheridan would show his loyalty to Mackiewicz by apparently writing him a letter of recommendation to Brookline College in Phoenix.

Please see a link to the letter below. 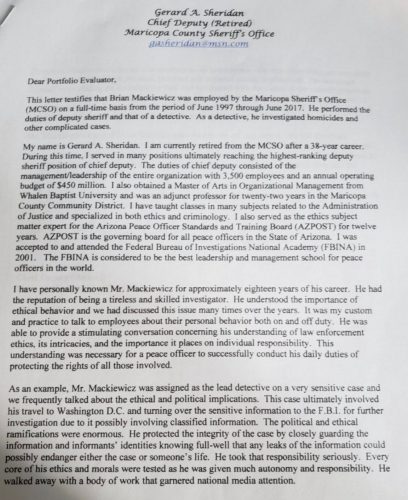 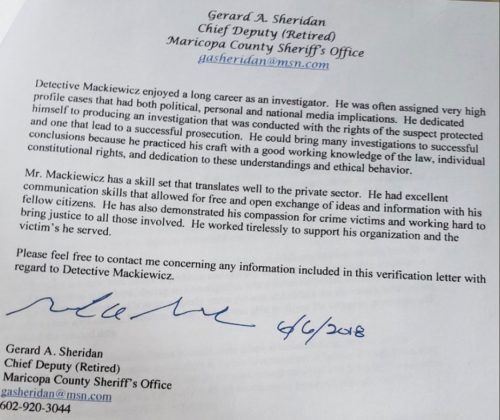 The information about Mackiewicz’s sexual exploits and alleged overtime padding while he was on duty for Sheridan and Arpaio did not make the contents of the letter.

Former Deputy Chief Sheridan was reached for comment on the document contents.

He replied, asking for specific questions.

These are the ones that were sent.

1) Did you write the letter of reference for Brian Mackiewicz for Brookline College despite the public 2016 court findings and later allegations that he engaged in similar behavior while living in the northeast before returning to Arizona?

2) Based on the Butts and Court Documents, the culture at the Maricopa County Sheriff’s Department under Sheriff Arpaio and you as Chief Deputy appeared to have condoned corruption, favoritism, nepotism, coverups, and inappropriate sexual behavior towards women in the cases of Mr. Butts and Mr. Mackiewicz. Please comment on that.

*  After these examples of poor behavior, why was he promoted?

Mr. Sheridan has not replied to any of these questions.

Jerry Sheridan said at a meeting of ASU College Republicans that he wants to bring back some of the people that worked for him and Joe Arpaio before Paul Penzone took over in January 2017.

If Chris Butts and Brian James Mackiewicz are two examples of the people he wants to bring back to the Sheriff’s office, voters have two more reasons to reelect Paul Penzone and prevent the restoration of the culture of corruption, coverups, and inappropriate sexual behavior that occurred when Sheridan was Joe Arpaio’s number two.