‘A Republic, If You Can Keep it’

Home/Courts & Law, National Elections/‘A Republic, If You Can Keep it’
Previous Next

‘A Republic, If You Can Keep it’

Cheeto Benito went the full fascist banana Republican tinpot dictator on Tuesday. To paraphrase Benjamin Franklin, “we have a republic, if we can keep it.”

When it comes to Donald Trump’s presidency, the “this is not normal” observation has long since lost its novelty, but yesterday was nevertheless historic. Americans heard something from their president that no previous group of Americans has ever confronted.

The New York Times‘ report added that it was “remarkable” to hear a sitting president call on the attorney general to take action against a political opponent ahead of an election. 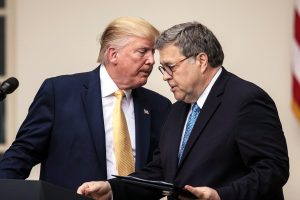 And yet, that’s precisely what Trump did. “We’ve got to get the attorney general to act,” the flailing Republican incumbent told Fox News. “He’s got to act, and he’s got to act fast. He’s got to appoint somebody. This is major corruption, and this has to be known about before the election.”

To be sure, the president has been unsubtle of late in calling for Joe Biden’s imprisonment, but yesterday was the first time Trump, publicly and explicitly, demanded that Bill Barr go after his 2020 opponent “before the election,” despite the fact that his opponent hasn’t done anything wrong.

Julian Zelizer, a presidential historian at Princeton University, told the Associated Press that Trump’s pressure campaign on Barr has moved into uncharted territory for presidential politics.

“We are seeing a total politicization of the justice system in the final stages of an election,” Zelizer said.

President Donald Trump also called for House Intelligence Committee Chairman Adam Schiff (D-CA) to be “put away” for saying the Hunter Biden laptop stories are part of a smear campaign that originated as part of Russian disinformation operation. During a call into his favorite morning news show Fox & Friends, Trump [said] “It’s just crazy. I saw Shifty Schiff get up yesterday and say this is Russia,” Trump exclaimed, using his favorite nickname for Schiff. “He’s a sick man. He is so sick. We went through two and a half years of that, plus. This guy, he ought to be put away, or he ought to be, you know, something should happen with him.”

In fact, the FBI is investigating whether the laptop dump is part of a foreign disinformation operation.

[I]n the not-too-distant past, if the United States saw an authoritarian leader try to prosecute his domestic rival ahead of an election, we would help lead an international coalition to denounce such corruption. Now, this is happening here.

The fact that this is happening out in the open makes it all the more extraordinary. If an investigative journalist had uncovered a private White House memo in which Trump quietly urged the Justice Department to prosecute his opponent to help him win re-election, it would be on the front page of every newspaper in the country. It would likely become a presidency-defining scandal.

But in 2020, there is no private memo to uncover: Trump, indifferent and incapable of shame, took the message to a national television audience. The Republican incumbent, for the first time in American history, is openly and desperately trying to turn federal law enforcement into an appendage of his campaign.

"The attorney general has to act" — Trump pleads with Bill Barr to do something to hurt Joe Biden pic.twitter.com/Bco8fTveEf

In June 2016, former President Bill Clinton exchanged pleasantries on a tarmac with then-Attorney General Loretta Lynch, and according to everyone involved, it was a fairly brief and inconsequential social interaction. Such conversations are not uncommon when prominent political figures are in the same place at the same time. Republicans and much of the political media were nevertheless apoplectic, insisting that the Clinton/Lynch conversation raised the prospect of politically motivated decisions at the Justice Department.

Four years later, the sitting president is practically begging the attorney general to help him win a second term by targeting his opponent with trumped up charges.

In 1974, Congress drew articles of impeachment against Richard Nixon, and among the most serious allegations were charges that the then-president was “endeavouring to misuse” federal departments and agencies — the CIA, FBI, IRS, et al. — for political ends. The allegations had the benefit of being true, and they helped lead to Nixon’s downfall.

Stuart Stevens, Rick Wilson, Steve Schmidt and Reed Galen from the Lincoln Project in an op-ed today at the Washington Post write, Republicans, it’s time to choose between autocracy and a republic (subscriber content).