Home/Courts & Law, Education/ABOR should implead the Arizona legislature as an indispensable party in tuition suit
Previous Next 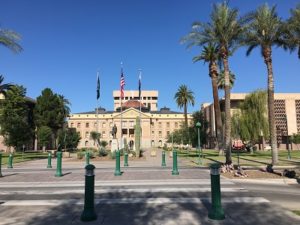 I posted about this lawsuit over the weekend, AG Mark Brnovich creates a ‘straw man’ for our lawless Tea-Publican legislature on higher ed funding.

The head of the state Board of Regents, Bill Ridenour, blasted Attorney General Mark Brnovich for what he said is a publicity stunt Friday — he called it “political pandering” — in suing the board and blaming its members for the steep hike in tuition in the last 15 years. ABOR chairman calls tuition lawsuit a publicity stunt:

“The AG’s lawsuit, while it makes for good headlines, does nothing to change the burden for students and their families,” he said in a prepared statement. “The suit is full of attacks, but offers no constructive remedies.”

Ridenour said Brnovich is right on at least one issue: The “seismic” shift in cost from the state to students to attend one of the state’s three universities.

What’s wrong with the litigation, he said, is that it seeks a solution from just the regents, ignoring the role he said lawmakers have played in the 300-plus percent increase in tuition since 2003. And Ridenour said if the issue is going to be hashed out in court, then the lawsuit needs to involve more than the regents.

“If it goes to that extent, the Legislature is an indispensable party,” he told Capitol Media Services.

Article XI, Section 6: The university and all other state educational institutions shall be open to students of both sexes, and the instruction furnished shall be as nearly free as possible. The legislature shall provide for a system of common schools by which a free school shall be established and maintained in every school district for at least six months in each year, which school shall be open to all pupils between the ages of six and twenty-one years.

I cannot imagine that the court would not grant ABOR’s motion to implead the Arizona legislature as an indispensable party.

[W]ith Brnovich having filed suit which essentially says the regents — and the regents alone — are violating the Arizona Constitution, Ridenour sees an opportunity to finally get a definitive legal ruling on who really is responsible.

“This suit will allow us to present the facts to a court of law and seek clarification of our constitutionally mandated obligation to provide ‘instruction as nearly free as possible,’ ” he said. “We can now address who will pay for that mandate.”

Brnovich spokeswoman Mia Garcia defended the decision to sue only the regents and not the lawmakers.

“We do not believe the court can order the Legislature to appropriate more funding for higher education,” she said. But Garcia said a judge can order the regents to calculate tuition “based on actual costs” and determine if that meets the constitutional requirement.

It is true that the court cannot order the legislature to appropriate more funding for higher education (“political question” doctrine). But it is in the court’s jurisdiction to declare the meaning of state constitutional provisions and to determine the rights and obligations of the parties to the lawsuit under the constitution. This is why the Arizona legislature needs to be impleaded.

The argument that the court can order the regents to calculate tuition “based on actual costs” is really misdirected. The Arizona legislature is supposed to fund higher education “based on actual cost,” and any tuition (and/or fees) should be de minimus so that “the instruction furnished shall be as nearly free as possible.” This is not happening. Arizona cuts to college student support still among steepest in nation: State support for students at Arizona’s three public universities has fallen by 53.8 percent since 2008, more than three times the national decline over the same period, according to a new report from the Center on Budget and Policy Priorities.

Politics aside, some research by Capitol Media Services also could undermine Brnovich’s contention that the hike in tuition has far outstripped the loss of state dollars.

Figures prepared by legislative budget staffers show that in 2008 there were 111,368 full-time equivalent students in the university system. That FTE measurement is designed to deal with the fact that some students are enrolled only on a part-time basis.

Total funding from both state aid and tuition totaled nearly $1.9 billion, or $16,986 per student.

And legislative budget staffers said if inflation is taken into account, the total amount being collected in both state aid and tuition on a per-student basis is actually 7.4 percent less than in 2008.

That means the tuition increases that Brnovich cites in his lawsuit did not keep pace with both the reduction in state funding and inflation (i.e., his claim is without merit).

Ridenour said any look at tuition cannot ignore the declining role of the state.

A decade ago, he said the Legislature funded about 75 percent of the cost for an in-state student, not counting expenses for the University of Arizona Colleges of Medicine. This year, he said, that state-aid figure is just 34 percent.

Ridenour acknowledged the question of state funding of higher education is not an Arizona-only issue.

“What is unique is that in FY 2012, Arizona ranks 48th in per capita support for higher education,” he said.

The idea of legal action against the Legislature is not new. It was first raised two years ago by Mark Killian when he was chairman of the board who told Capitol Media Services that his colleagues should sue lawmakers if they do not come forward with more funds for the university system. That never happened, with Ridenour saying Monday that board members opted instead to work with Gov. Doug Ducey and lawmakers in hopes of reversing the trend, including a $99 million cut the governor signed into law. The results since then have been mixed.

The new budget approved in May provides an additional $15 million in one-time funding to universities.

But lawmakers also removed a one-time $19 million infusion they got last year.

And even that $15 million has strings attacked, with the University of Arizona having to use $1 million of its $4.2 million allocation to fund a so-called “economic freedom school” which was started with seed money from the Koch brothers, whose financial interests range from Georgia-Pacific paper products and Stainmaster carpets to jet fuel and cattle. And there’s an identical $1 million earmark out of the $7.6 million for Arizona State University.

Lawmakers also agreed to let the universities borrow close to $1 billion for capital needs, with the promise there will be funds in future years to pay that back.

That promise was met with this politically motivated publicity stunt of a lawsuit. Our lawless Tea-Publican legislature cannot be trusted. Sue the evil GOP bastards and get a declaratory judgment on the constitutional obligation of the Arizona legislature to fund higher education. AG Brnovich just gave ABOR the grounds for the lawsuit that it previously passed up.