All in the family: 3 Hernandez siblings running for election in 2018

Home/AZ Politics/All in the family: 3 Hernandez siblings running for election in 2018
Previous Next

All in the family: 3 Hernandez siblings running for election in 2018

Three siblings in Tucson, all named Hernandez are running for election in 2018. Daniel is running for LD 2 House (re-election), Consuelo for Sunnyside School District Governing Board, Alma for LD 3 House.  They are having a joint fiesta campaign kickoff on February 15 (scroll down to bottom for flyer).

One-term Democrat LD 2 House Rep. Daniel Hernandez Jr, seeking re-election to his House seat. He defeated Republican incumbent Rep. Chris Ackerley 32,651 to 28,506 in Nov. 2016. (The other House Rep. Democrat incumbent Rosanna Gabaldon got 32,495 votes.) Daniel has also served on the Sunnyside School District Governing Board as President, and was the Congressional intern who assisted then CD-8 Congresswoman Gabby Giffords after she was shot in the head, at the Tucson mass shooting on 1/8/11.

His youngest sister Alma is now running for LD 3 House, where there will be 2 open seats, as LD 3 House Rep. Macario Saladate is retiring, and Rep. Sally Gonzales is running for state senate in that same district. Also running for the House in LD 3 now is current LD 3 Senator Olivia Cajero Bedford, and political newcomer (but involved in Dem politics for years) Andres Cano, a Special Staff Assistant to Pima County District 5 Supervisor Richard Elias.

Alma recently got her M.P.H. from the U of Arizona, and has been active in Democratic politics for years. Recently she led Arizonans United for Healthcare working to defeat the repeal of the ACA (Affordable Care Act).

All 3 of these siblings went to the Democratic National Convention in July, 2016 as delegates.

So indeed for this Hernandez family, politics and campaigning is “all in the family”. They are having a joint 3 candidate campaign kickoff on Thurs. Feb. 15, 6 p.m. at Salon Mexico, 106 W. Drachman St. Tucson. 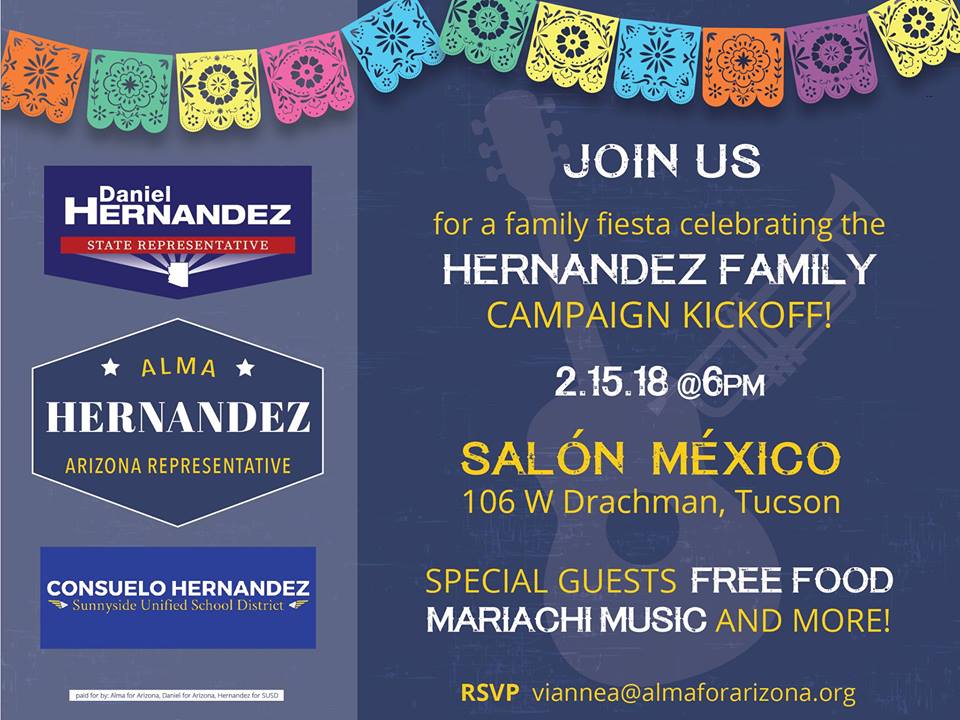