On Friday the government said that the economy grew at a 4.1 percent annual rate last quarter.

Naturally our egomaniacal Twitter-troll-in-chief, who always speaks in exaggerated superlatives, tried to claim that this was the biggest, bestest, greatest economic achievement by any president ever in the history of the world!

Not even close, dumbass. Fact check: Mr. Trump cited a long list of indicators of how well the economy has performed on his watch, some lacking context or foundation. Barack Obama had three quarters besting Trump’s best quarter. 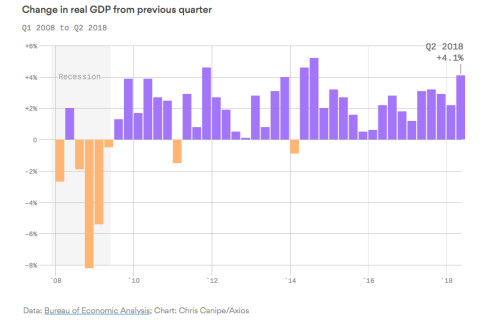 Economists caution that the latest acceleration, while good news for American businesses and households in the short term, is unsustainable in the long term and could raise the risk that the recovery will flame out in the years ahead.

The quarter’s figures were pumped up by a range of one-time factors — including a surge in exports tied, at least in part, to Mr. Trump’s trade policies, as foreign buyers rushed to stock up on American goods before tariffs took effect — that are unlikely to recur. Most forecasters expect growth to cool in the second half of the year — even without factoring in the possibility of a trade war, which corporate executives in recent weeks have cited as a source of uncertainty that could force them to pare hiring and investment plans.

So far, however, there is scant evidence that companies broadly are reinvesting their tax savings. Business investment in equipment has grown more slowly in the first half of the year, and many companies are choosing to pay dividends and buy back shares instead.

“Business spending is not picking up the way proponents of the tax cut had hoped,” said Michael Gapen, chief United States economist for Barclays.

Instead, the tax cuts seem to be encouraging consumer spending, which rose 4 percent in the spring quarter, the biggest increase since 2014. Increased federal spending — the result of the two-year budget deal passed by Congress this year — is likewise giving the economy a lift, helping to nudge G.D.P. growth out of the rut of 2 to 2.5 percent where it has spent much of the recovery.

Whether those policies are a good idea is another question. Many economists question the wisdom of passing what amounts to a deficit-funded stimulus package when unemployment is low and the economy is strong. [How the Trump Tax Cut Is Helping to Push the Federal Deficit to $1 Trillion.] Few outside the White House think a growth rate of 4 percent is sustainable in the long term, in part because the aging of the baby boom generation means a shrinking share of the American population is working.

For policymakers at the Federal Reserve, the tax cuts and spending increases could pose a nearer-term challenge. The Fed has been trying to strike a delicate balance, raising interest rates gradually in an effort to keep inflation in check without snuffing out the recovery. If the second quarter’s growth rate continues, it could risk accelerating inflation and prompt the Fed to raise rates more quickly. That, in turn, could cause a recession.

The more immediate risk may be the possibility of a trade war. Mr. Trump has placed tariffs on billions of dollars of imports from China, the European Union and other countries. Trading partners have responded by imposing retaliatory tariffs, and both sides have threatened more.

Tensions with Europe appeared to ease this week when Mr. Trump and Jean-Claude Juncker, the president of the European Commission, agreed to work toward a trade deal. But the durability of that truce is unclear, and relations with China remain fraught.

In the short term, trade tensions may be contributing to growth by prompting foreign buyers to stock up on American products before their governments impose retaliatory tariffs. Soybean exports, in particular, have surged, rising more than 50 percent in May from a year earlier.

Over all, exports rose at a 9.3 percent rate in the second quarter, accounting for a quarter of the total G.D.P. growth. But the trend is unlikely to last: Exports will almost certainly slump in the third and fourth quarters, and will turn into a drag on overall G.D.P. growth.

“We don’t want to overexaggerate the strength of the economy given the real risks that are being put in place by the policy choices,” said Joe Brusuelas, chief economist at the accounting firm RSM U.S.

Republicans are definitely not going to be running on that big tax cut they passed at the end of last year, not with headlines like this one at Politico blaring: ‘Eye-popping’ payouts for CEOs follow Trump’s tax cuts. The windfall from the corporate tax cuts is ending up in executives’ pockets, and the numbers really are astounding. The corporations have been plowing tax cuts into buying back record amounts of their own stocks, boosting the value of existing share for shareholders and giving corporate CEOs a chance to get obscenely wealthy by selling their own stock.

What we wont be seeing are eye-popping new salaries for workers. In fact, it’s pretty much the opposite. “Workers are shouldering a rising share of federal revenue, while tax payments by businesses are plunging toward record lows,” Yahoo News reports. “Treasury Department data for the first half of 2018 show individual income tax receipts rose 8.1%, to $915 billion. Corporate income tax receipts fell 32.4%, to $100 billion.”

Workers are sending more in taxes to the federal government, and their wages are not growing when inflation is taken into account. Of course they’re not! Corporations aren’t spending their tax windfall on the people who make their businesses run, their workers. They’re spending it on themselves and their shareholders.

The federal government has admitted that workers are earning lower wages since the passage of the GOP tax scam. Workers’ wages fall after passage of GOP tax cuts:

The Bureau of Labor Statistics issued a new release detailing the “real earnings summary” through May 2018.

The true revelation was tucked away at the bottom of the release, in the “Production and nonsupervisory employees” section: “From May 2017 to May 2018, real average hourly earnings decreased 0.1 percent, seasonally adjusted,” it read.

The entire rationale behind the tax cut was to boost Americans’ wages. But the BLS numbers prove that workers who are not bosses and who produce things are in fact making less for their time than they did last year. 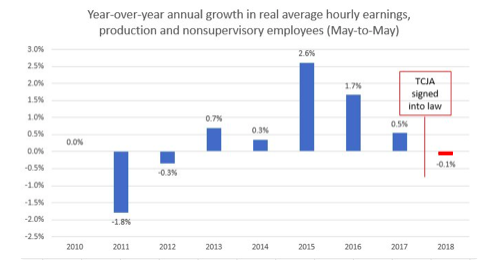 According to Jared Bernstein of the Center on Budget and Policy Priorities, since Trump took office, the “real hourly pay of mid-class workers” is only up 0.4 percent, which amounts to “an extra dime an hour.”

“At this rate, that tax-cut induced $4,000 in your paycheck will take 28 years,” Bernstein wrote.

Noah Smith, who was an assistant professor of finance at Stony Brook University, is a Bloomberg Opinion columnist. He writes Trump’s Tax Cut Hasn’t Done Anything for Workers.

Will Bunch reminds you, Remember that raise you were promised last year? Wall Street took it from you.

Republicans propose to be even more reckless and fiscally irresponsible with their “Tax Reform 2.0” proposal, which aims to make last year’s tax cuts permanent. House Republicans Want Permanent Tax Cuts They Can’t Pay For. And “Dear Leader” is threatening to bypass the Congress – and the Constitution – by issuing a federal regulation to index capital gains for inflation, a $100 billion boost for the wealthy. Trump Administration Mulls a Unilateral Tax Cut for the Rich.

It’s time that we stop the insanity of trickle down economics.

HB 2912: “Tort Reform” on Steroids Will Not Help Arizona’s Economy Recover from COVID-19