Alarming surges in coronavirus cases across the U.S. South and West raised fears Monday that the outbreak is spiraling out of control and that hard-won progress against the scourge is slipping away because of resistance among many Americans to wearing masks and keeping their distance from others. Surging US virus cases raise fear that progress is slipping:

Confirming predictions that the easing of state lockdowns over the past month and a half would lead to a comeback by the virus, cases surpassed 100,000 in Florida, hospitalizations are rising dramatically in Houston and Georgia, and a startling 1 in 5 of those tested in Arizona are proving to be infected.

Over the weekend, the virus seemed to be everywhere at once: Several campaign staff members who helped set up President Donald Trump’s rally in Tulsa, Oklahoma, tested positive, as did 23 Clemson University football players in South Carolina. At least 30 members of the Louisiana State University team were isolated after becoming infected or coming into contact with someone who was. Meatpacking plants were also hit with outbreaks.

“It is snowballing. We will most certainly see more people die as a result of this spike,” said Dr. Marc Boom, CEO and president of Houston Methodist Hospital, noting that the number of COVID-19 hospital admissions has tripled since Memorial Day to more than 1,400 across eight hospital systems in the Houston metropolitan area.

He warned that hospitals could be overwhelmed in three weeks, and he pleaded with people to cover their faces and practice social distancing.

“It is possible to open up at a judicious pace and coexist with the virus, but it requires millions and millions of people to do the right thing,” Boom said.

Texas is among a number of states — including Arizona, Alabama, Florida and South Carolina — whose governors have resisted statewide mask requirements, leaving the matter to local authorities.

The number of new coronavirus cases across the country per day has reached more than 26,000, up from about 21,000 two weeks ago, according to an Associated Press analysis of data compiled by Johns Hopkins University. Over 120,000 deaths in the U.S. have been blamed on the virus, the highest toll in the world.

In Georgia, the number of people hospitalized because of COVID-19 rose to 1,000, erasing a month’s worth of progress.

Infections are at their highest level since the outbreak began, nearly two months after Georgia began lifting restrictions on businesses. Gov. Brian Kemp has required face coverings by waiters, barbers and others working face-to-face with customers but has largely let businesses decide whether customers must wear masks.

In Orlando, 152 coronavirus cases were linked to one bar near the University of Central Florida campus, said Dr. Raul Pino, a state health officer in the tourism city.

Although he asked health officials to renew calls for people to wear masks and keep their distance, Gov. Ron DeSantis has not signaled he will retreat from reopening the state after three months of shutdowns that have damaged the economy.

In Louisiana, however, Gov. John Bel Edwards extended restrictions on businesses because of a troubling uptick in cases, following the example set by Utah and Oregon last week. Louisiana has recorded more than 3,000 deaths.

“There are a lot of people out there saying they are done with this virus. Well, the virus isn’t done with us,” Edwards said.

Dr. Michael Ryan, the World Health Organization’s emergencies chief, said the outbreak is “definitely accelerating” in the U.S. and a number of other countries, dismissing the notion that the record-breaking daily levels of new cases simply reflect more testing. He noted that numerous countries have seen marked increases in hospital admissions and deaths.

“The epidemic is now peaking or moving towards a peak in a number of large countries,” he warned.

In the U.S., Arizona, in particular, is seeing disturbing trends in several benchmarks, including the percentage of tests that prove positive for the virus. Arizona’s is the highest in the nation.

The state’s positive test rate is at a seven-day average of over 20%, well above the national average of 8.4% and the 10% level that public health officials say is a problem. When the positive test rate rises, it means that an outbreak is worsening — not just that more people are getting tested.

Which brings me to this damn fool, Arizona’s pandemic denier senator, Martha McSally. You can’t make this shit up.

One Republican senator has an ambitious proposal to boost travel within the United States despite the COVID-19 pandemic.

“A day ahead of Trump’s visit to Arizona, GOP Senator Martha McSally proposes giving taxpayers *$4,000 each* to take a vacation,” Bloomberg’s Steve Dennis reported Monday evening. “Couples would get $8,000 in vacation tax credits, plus $500 per kid.” 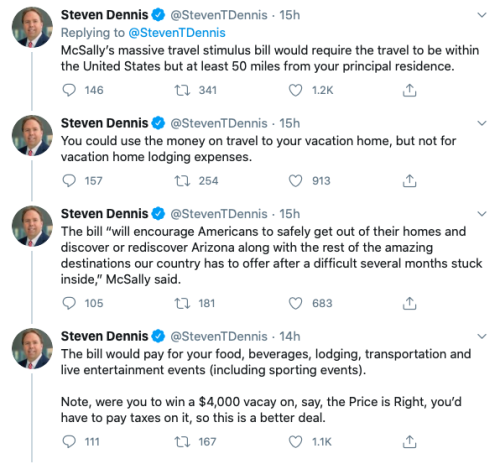 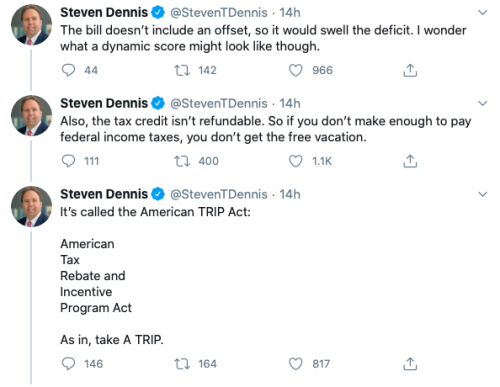 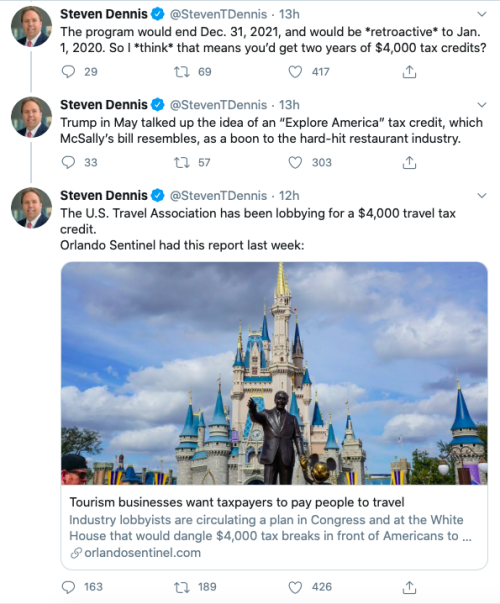 This comment to this thread pretty much sums it up.

Out of touch, out of time. We can’t get rid of Martha McSally soon enough.

UPDATE: Arizonans will face a 14-day quarantine if they travel to New York, New Jersey, or Connecticut, whose governors announced the restriction Wednesday (6/24) to keep people from COVID-19 “hot spots” from bringing the infection with them. Expect other states to follow suit.

Another Day, another Lincoln Project Ad and another group of Republicans forming an Anti Trump PAC

Arizona School Board Candidates React to the Delay in Reopening Schools

Less than Two Days to get Invest in Ed and Second...

How Many Ways Can Arizona Flub Its COVID19 Response Simultaneously? (video)