The very same Republicans in the Arizona legislature are pursuing anti-immigrant “sanctuary cities” legislation which would slap civil penalties on government officials, state and local law enforcement that knowingly fail to comply with federal immigration law enforcement, and would allow victims of certain crimes by undocumented immigrants to sue for civil damages.

Federal law is not a cafeteria plan from which one can pick and choose the federal laws with which one agrees to comply on a whim. The law is the law. These Republicans are beyond pathetic.

For the record, there are no “sanctuary cities” in Arizona. This is a solution in search of a non-existent problem. Or more accurately, it is yet another cynical Republican campaign stunt to gin up anti-immigrant hysteria among the GOP base to turn out their vote in November, and to appease their racist white nationalist “Dear Leader” ahead of his MAGA cult rally in Phoenix this month.

Arizona is on the brink of an all-out war over anti-immigrant proposals that critics are likening to the infamous Senate Bill 1070 that tainted the state as racist.

Could there be anything more sad and pathetic?

House Bill 2598 would require local authorities to detain – at federal request – a person suspected of being undocumented until immigration agents pick them up for deportation proceedings.

It would slap civil penalties on government officials, state and local law enforcement that knowingly fail to comply with the federal detainer, and it allows victims of certain crimes by undocumented immigrants to sue for civil damages.

Republican Rep. Bret Roberts is pushing the legislation in the wake of Tucson’s failed sanctuary initiative in November to ensure no other city even attempts to approve that designation.

Arizona already prohibits sanctuary cities, and those violating the state law could face penalties ranging from $1,000 to $5,000 per day.

Roberts’ proposal goes much further than existing law. HCR 2036 and SCR 1007 would ask voters to enshrine existing requirements into the Arizona constitution.

So these racists wants to befoul the Arizona Constitution with this anti-Christian: 22 Bible Verses on Welcoming Immigrants, anti-Reagan: “America is a shining city upon a hill whose beacon light guides freedom-loving people everywhere,” and anti-American bill: America has always welcomed refugees, except during dark periods of backsliding in our history from racist “America First” types, like our “Dear Leader.”

On Thursday, the Senate’s Judiciary Committee gave thumbs up to SCR 1007 amid a raucous hearing. Senator Eddie Farnsworth (R-Gilbert) called security on migrant activists speaking against the measure in a dramatic clash that’s likely to be repeated.

Lobbyist Hugo Polanco, representing activist group Living United for Change in Arizona, was testifying that the resolution would be “a return to the racism, divisiveness and hate of SB 1070” when committee chair and state Sen. Eddie Farnsworth stopped him.

“I’m going to caution you on the vitriol,” Farnsworth, R-Gilbert, said. “You can testify, but there’s nothing racist about anybody up here … You don’t need to be vitriolic.”

Polanco continued, recounting the experience of being a U.S. citizen with relatives living in the country illegally when SB 1070 passed. He said the law “ripped my family apart, and now SCR 1007 wants to bolster the remnants of the law, double down on its worst aspects and give it voter protection.”

As Polanco implored the committee on behalf of “families like mine to reject this racist, divisive and hateful legislation,” Farnsworth again interrupted him.

“OK, you’re done,” he said. “It’s unfortunate you can’t adhere to the terms of this committee.”

Speaking truth to power means calling out racism when one sees it. Farnsworth is only offended for the obvious racism being publicly called out for what it is. Does anyone believe that Donald Trump is not going to go full-on white nationalist anti-immigrant hysteria for his MAGA cult followers when he comes to Phoenix this month, as he has done in his past visits to Arizona? Get real. 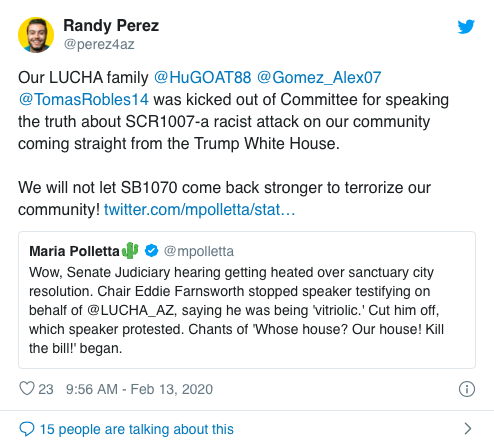 Anti-immigrant proposals have crept up over the years since SB 1070 prompted a national boycott against Arizona, but they have gone nowhere – until now.

What changed in that equation is no other than Republican Gov. Doug Ducey. He’s largely credited for holding the line on anti-immigrant bills, but no more. He is now the chief champion of the anti-sanctuary constitutional proposal.

Appealing to Ducey may be a waste of time at this point, but it’s worth trying. Ducey isn’t the cautious and sensible governor he appeared to be in his first term. But he may listen to business owners who know that once again tainting the state as racist is bad for the state’s economy.

Again, for the record, there are no “sanctuary cities” in Arizona. This is simply political grandstanding. Citizens shouldn’t befoul their state constitution for such a pathetic reason.

“The governor has been very consistent on these issues. He’s supportive of law enforcement and doesn’t see that as in contrast with keeping Arizona a welcoming state for all,” his spokesman Pat Ptak said.

Ptak points to Tucson to illustrate how Democrats and Republicans agree that a “sanctuary city” designation is a bad idea.

Is a gift to Trump worth this fight?

That’s correct. But it also proves there is no need for a constitutional amendment. Cities and towns – even the most liberal ones like Tucson – are terrified of losing state and federal dollars over protecting undocumented immigrants.

Surely, the governor hasn’t forgotten the millions of tourism dollars Arizona lost because of SB 1070.

The courts stripped most provisions of that 2010 law, but the stain as a racist state remains.

Ducey may be betting on Trump’s re-election to get a gig with his administration. But his first responsibility is with Arizonans, not his political future. And Arizona sure doesn’t want a repeat of the ugly public display of racism in SB1070.

The governor is poised to give Trump a sanctuary gift as early as next week when the president comes to Arizona. But with it, Ducey is unleashing the ugliest fight Arizona has ever seen.

If Republicans in the Arizona legislature pass this unnecessary and racially divisive legislation simply to appease their racist white nationalist “Dear leader” ahead of his Nuremberg-style MAGA cult rally in Phoenix, then maybe it is time for another economic boycott of Arizona.

The NFL Super Bowl is supposed to come to Phoenix in 2023, start there. Phoenix has lost a Super Bowl in the past because of our state’s racism. Other major league sports leagues and the NCAA have also penalized states for racist and/or discriminatory laws as well.

Take away their playthings and the money that flows with it. Hit them in the pocketbook to change their behavior. Greed for money is the greatest motivator for these people.

Coronavirus Response: Last Chance to Get it Right?

👉Do you care about crime? Now hear Laura Conover

👉Do you care about crime? Now hear Laura Conover

Adelita Grijalva wants to continue and build on the legacy of...

If Republicans succeed in killing the U.S. Postal Service, there will...