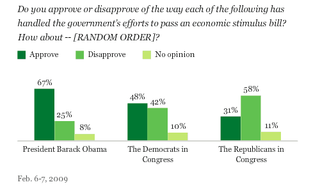 It looks like the country isn't overly fond of the Republicans' continued obstruction of the stimulus bill. People want the money out there stimulating the economy, and they want it now.
Is there a budget-related lesson to be learned here in Arizona? The Republicans competed their budget hatchet job for this fiscal year, and they're getting ready to offer us more of the same for the next.
Maybe Arizonans aren't happy with all this cutting, especially with Republicans insisting all other options are off the table. And if the Republicans refuse some of the stimulus money . . .
If we took the pulse of Arizona's voters, I have a feeling we'd see a bit of a drop in popularity of the ruling party since the election.

U.S. is two weeks away from going off the economic cliff because of Senate Republicans