Democratic members of the House Ethics Committee today called on Speaker Rusty Bowers and Ethics Chairman T.J. Shope to keep their promise to develop a code of conduct for members. The House remains in violation of its own rule to have a code of conduct in place, which was approved in 2018 after the expulsion of Republican Rep. Don Shooter for sexual harassment.

Democrats had appointed members to help develop a code of conduct in 2018, but then-Speaker J.D. Mesnard took no formal action before running for the Senate. Neither did incoming Speaker Bowers, until another scandal last session involving childhood sexual abuse and racist language resulted in the resignation of Republican Rep. David Stringer in March. When House Democrats threatened to call for a floor vote to take action on a member code of conduct after Stringer’s resignation, Shope instead proposed developing a code of conduct through the Ethics Committee that he chairs, and his motion passed without objection. 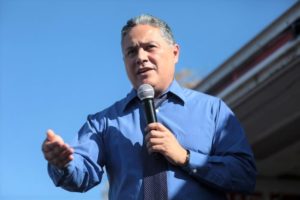 “There is no excuse for a delay of this length; this should have been done a long time ago,” said Rodriguez, D-Laveen.

But Democratic Ethics Committee members Diego Rodriguez and Kirsten Engel said no action has been taken since, even though Democrats developed a draft code of conduct and presented it to Shope before the legislative session adjourned in May.

Legislative District 18 Representative Jennifer Jermaine, in an email response to Blog writer David Gordon, confirmed this, stating “I was appointed to the committee in January and we have never met.” Jermaine also indicated that no followups have been scheduled for the remainder of 2019.

“There is no excuse for a delay of this length; this should have been done a long time ago,” said Rodriguez, D-Laveen. “We sent them a proposal, a draft code of conduct, and we haven’t had any communication, no agenda has been set, no other follow up. When you make a public commitment to do what’s right, walking away does a disservice to the state. Arizonans deserve to have a legislature that serves with integrity and pursuant to a code of conduct.”

Engel, D-Tucson, added: “Phoenix has a code of conduct. Tucson has a Code of Conduct. Mesa has a Code of Conduct. If these Arizona cities can hold their elected officials accountable, certainly we can as well. I look forward to working with the other members of the Ethics Committee in developing a code that will ensure the people of Arizona that every elected official serving in their legislature will be held accountable to the highest standards of personal integrity.”