President Donald Trump is extending his Festivus celebration by continuing to engage in the “Airing of Grievances,” his opportunity to tell others how they have disappointed him in the past year, and by wallowing in a pity party. On Christmas Eve, Trump airs more grievances:

The president is making a list, and checking it twice: Those who have wronged him. 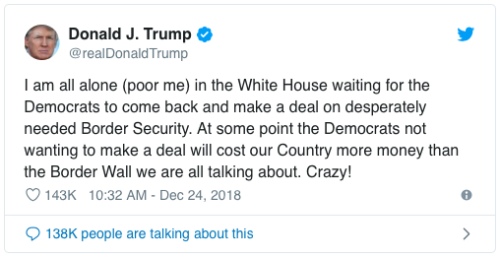 It was the 10th tweet in a steady stream — mostly complaints — that he aired on the day before Christmas: Democrats oppose his border wall plans but supported border fencing in the past, he wrote in his first tweet.American allies “take advantage of their friendship with the United States, both in military Protection and trade,” he complained. Defense Secretary General James Mattis didn’t understand how “these countries take total advantage of the U.S.,” he said in a third tweet.

Brett McGurk, the U.S. special envoy for the coalition to defeat ISIS who resigned this week in protest of the president’s removal of troops from Syria, “was the Obama appointee” involved in the “horrific Iran Nuclear Deal” that was approved by “Little Bob Corker,” the president said in a fourth tweet.

The president said in another tweet Sunday that Mattis would leave his position two months earlier than planned, after Mattis wrote a critical resignation letter.

“The only problem our economy has is the Fed,” he wrote in another tweet, this one about the Federal Reserve, which raised interest rates this month. “The Fed is like a powerful golfer who can’t score because he has no touch — he can’t putt!”

In his seventh and eighth tweets of the day, the president added the media to the list.

Complaining of a story that said he had lashed out at his acting Attorney General, Trump wrote: “This is a made up story, one of many, by the Fake News Media!” He argued that border wall reporting had been inaccurate, seeming to suggest inaccurately that he could build a wall with existing dollars, even though he’s seeking more than $5 billion for it.

The string of tweets come on the third day of a government shutdown, as the president seeks to encourage a lame duck Congress to put billions of dollars of funding into his border wall before Democrats assume control of the House of Representatives in January, and a day after the president moved up Mattis’ retirement.

President Donald Trump questioned a 7-year-old’s belief in Santa Claus, telling the child it was “marginal” at that age to still think Father Christmas is real.

“Are you still a believer in Santa?” Trump said to a child calling in to the federal government’s official “Santa Tracker,” run by the North American Aerospace Defense Command. “Because at 7, it’s marginal, right?” Trump said. 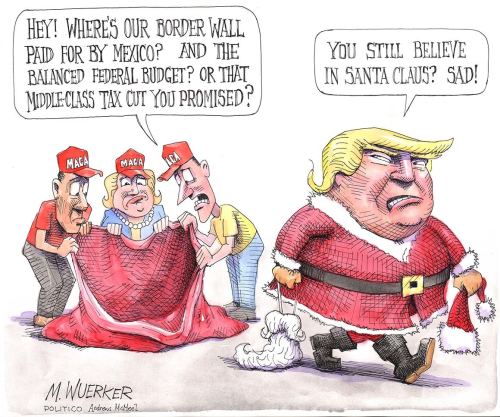 With the government partially shutdown amid a partisan spending standoff, the president and first lady were set to remain in Washington for Christmas. Continuing a tradition, the two fielded calls from kids across the country wanting to find out the latest on Santa’s progress across the globe.

The president’s remarks marked his only public event on Monday.

Someone who embraces the spirit of Festivus so thoroughly every day does not appreciate nor understand the responsibility of maintaining a child’s innocent belief in the magic of Christmas for as long as possible. ‘Is there a Santa Claus?’: How a child’s letter inspired the classic ‘Yes, Virginia’ response:

“Dear Editor,” Virginia O’Hanlon started her letter to the editor, “I am 8 years old.”

The young girl from New York City penned a letter in September 1897 to the New York Sun, explaining: “Some of my little friends say there is no Santa Claus. Papa says ‘If you see it in The Sun it’s so.’ ”

Then came the pointed question: “Please tell me the truth, is there a Santa Claus?”

The letter, written in careful cursive, prompted a response so touching and timeless that it has been shared countless times over the past century — and become its own classic Christmas story.

“Yes, Virginia, there is a Santa Claus,” editorial writer Francis Pharcellus Church anonymously answered in the newspaper. “He exists as certainly as love and generosity and devotion exist, and you know that they abound and give to your life its highest beauty and joy. Alas! How dreary would be the world if there were no Santa Claus. It would be as dreary as if there were no Virginias.”

Everyone knows this story, it is all the president had to repeat, but nooo. “Because at 7, it’s marginal, right?”

Well, at least President Trump can wander the White House today “all alone (poor me)” wallowing in his pity party and enjoy Melania’s The Shining Christmas decorations. 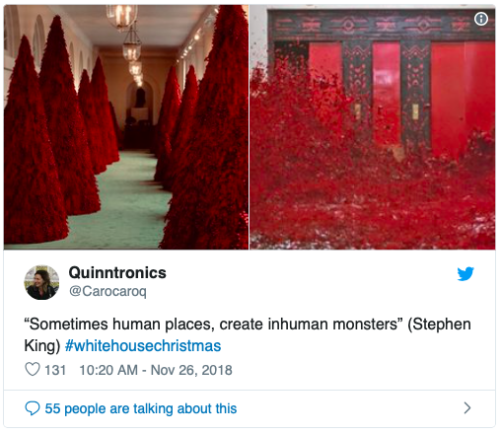 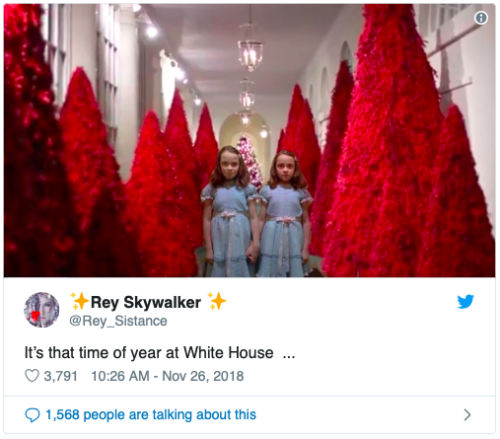