On Thursday Donald Trump crossed the Rubicon — the event in 49 B.C. that precipitated the Roman Civil War, which ultimately led to Caesar becoming dictator for life and the rise of the imperial era of Rome — when he gave his incredibly corrupt Attorney General William P. Barr sweeping new authorities to conduct a review into how the 2016 Trump campaign’s ties to Russia were investigated, significantly escalating the administration’s efforts to “investigate the investigators” and potentially prosecute those who investigated his campaign’s multiple and repeated contacts with Russian operatives in the 2016 campaign. The plot to destroy American constitutional democracy.

I’ve been trying to tell people, with varying degrees of success, that next year’s campaign is going to be—by far—the most ruthless and dishonest campaign that any living American has seen. Some people take me seriously. But most say something along the lines that it can hardly get any worse.

Oh yes it can. It can get a lot worse. And if you want to see how, watch this clip of Corey Lewandowski on Fox News Thursday night, via Josh Marshall’s Twitter feed: 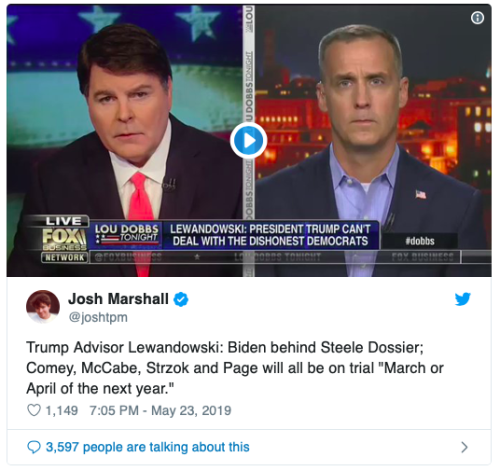 Here’s the video link. This is chilling.

Here’s the transcript, although you really have to study his face and eyes and hear his voice to get the full Weimar effect: “They should be fearful, and I’ll tell you why. The person who has gotten a pass on this so far is Joe Biden. Because I believe that the investigation which was launched came from somewhere inside the White House to greenlight Clapper, Comey, and Brennan to start this investigation into Donald Trump for no valid reason. We now know the State Department, we’ve seen the contemporaneous emails that were put into place after Victoria Nuland did a meeting with Christopher Steele, then notified the FBI this person had no credibility. But it continued. Because it came from the highest levels of the government.

“And Joe Biden has not answered what he knew and when he knew it of how this investigation began. And when Attorney General Barr and Mr. Horowitz release that report in approximately a month I think we’re gonna see additional criminal referrals, with McCabe getting another referral, Comey a referral, Strzok and Page, James Baker, possibly Bruce Orr, and other people we haven’t even meant [sic] as household names yet—but criminal referrals. And I think what we’re gonna see, Gregg, is in March or April of next year, Jamey Comey, Andy McCabe, Strzok and Page will be on trial for the crimes they have committed against the Fourth Amendment, against this president, and we can’t wait.”

Lewandowski was far from the most ravening of Trump’s campaign staff or post-election surrogates, but here he is offering a kind of unified theory of treason, in which every Democratic politician and every member of the Justice Department and FBI — including Republican-appointed officials who sat there through decades of administrations on the left and right — were all joined in treason. Which is the new word for witchcraft.

And the terrifying thing is … this is not ridiculous. Oh, the accusations are ludicrous, but the idea that the months leading up to the 2020 election will not consist of a Trump-sponsored production of The Crucible, held weekly with a revolving cast and a pre-lit bonfire is nowhere near as silly as it should be.

How hard is to imagine Hillary Clinton being led down Pennsylvania Avenue in chains while MAGA-hat wearing mobs hurl invective and rotten fruit from the wings? On what charges? Who knows? Who cares? Charges. They don’t need no stinkin’ charges. The thesaurus may say that ludicrous and laughable are synonyms. But something can be both preposterous, and ghastly. Just watch that clip if you don’t believe them.

When Trump was laying out his “death list” earlier this week, he included on that list an unnamed “someone higher up” than Comey. Biden is who he meant. Trump, and Rudy Giuliani, and a whole collection of Republican helpers, are building up a case against Biden on every possible front. You only thought it was Ted Cruz’s father who shot JFK. Turns out that was Joe Biden. Stick around, it’ll be on Fox before you know it.

On Thursday, Donald Trump was reminded that treason carries a death penalty, and in response he began listing names. And the fact that Trump is ready to put people’s heads on spikes for the crime of not supporting Trump, didn’t even make one day’s news.

Long before becoming president, Donald Trump called for the jailing of his adversaries. Aided by Attorney General William Barr, he may now actually be training the full force of federal law enforcement against his enemies, real or perceived. Unlike Richard Nixon, who acted in secret, Trump is corrupting the justice system openly and publicly.

The seriousness of such a presidential abuse of power, and its potential for undermining the constitutional order, could well surpass any of the crimes detailed in the Mueller Report. Indeed, the Congress long ago recognized that such misconduct can merit impeachment.

It’s reminiscent of Nixon’s secret scheme to “use the available federal machinery to screw our political enemies,” as then-White House Counsel John Dean put it, by manipulating “grant availability, federal contract, litigation, prosecution, etc.” Nixon directed the IRS provide potentially damaging information against some of his enemies. Although the agency’s commissioner refused Nixon’s demand, the scheme became part of the impeachment case against Nixon, which accused him of illegally endeavoring “to obtain [information] from the Internal Revenue Service, in violation of the constitutional rights of citizens.”

While much of Nixon’s scheme was forestalled, Trump appears poised to effectuate his.

Charles Pierce at Esquire is right: Nancy Pelosi Must Defend the Essential Integrity of the Constitution:

[O]n the electric Twitter machine, I saw a picture that was both remarkable, and remarkably sad. Congressman Justin Amash, Republican of Michigan, had a group of high school students sitting on the steps of the U.S, Capitol, and he was explaining to them what the impeachment process is, and why Amash has called for it, bringing down upon his head the wrath of flying monkeys everywhere.

Now, let’s be honest. If a sea cucumber ran against Justin Amash, I’d vote for it. But there’s no question that Amash is sincere. He’s stood in against the Chimpanzee Escadrille, and against his own caucus, and he has come back for more. And there he is, in front of the most prominent symbol of American legislative power, explaining to people more open-minded than his fellow Republicans are how it’s time for that power to be engaged fully against a renegade and criminal presidency. Of course, none of those kids outside the building can vote inside, and that’s what makes the photo so very sad. Amash’s seminar al frescowould have benefitted legislators of both parties.

It really is time. Don McGahn blew off the House Judiciary Committee on Tuesday morning, relying on a fanciful legal opinion that had no basis in the law. And, if this account in Politico is to be believed, the passions are rising within the majority caucus of the House.

It is reported that the meetings got a little fiery. Good. They should be. This is not a question for the timid nor an issue for soft words. There should be a brawl over this matter, and, if you think these intra-party squabbles are loud, wait until an impeachment inquiry opens up. My guess is that civility will not be a priority, and good for that, too. Excising the corruption that entered the Republican party in the 1980s, and entered the White House in 2017, never was going to be gentle.

It really is time. Nobody supported Nancy Pelosi more than I did when lightweights like Tim Ryan and Seth Moulton came after her last year. I still don’t see a legislative tactician of her caliber anywhere else in the caucus. But this is now beyond tactics, no matter how skillfully they might be deployed. This is a fight for the essential integrity of the Constitution, and pre-emptively ruling out any weapon in that battle is dereliction of the first order. It has been argued that an impeachment inquiry would divert legislative energy from other important issues and, what the hell, impeachment has no chance in the Senate anyway. So much of the leadership’s strategy flows from that conviction. When Congressman Hakeem Jeffries, the chair of the House Democratic Caucus, says, as he did Tuesday morning, that the Democratic triumphs in 2018 came because of candidates who “did not run on impeachment, did not run on collusion, did not run on obstruction,” his point is that, in one way or another, impeachment is a political loser and that the new House majority has other important business before it.

But the simple fact is that no bill produced by a Democratic House has a chance in Mitch McConnell’s Senate. In this, impeachment is no different from Medicare For All or a Green New Deal or a big infrastructure package or humane immigration reform. If passage in the Senate is the sine qua non for doing something in the House, then Pelosi, Jeffries and the rest of their caucus simply should give up and go home for the summer. In addition, an impeachment inquiry, which is all Congressman Raskin and the others were asking for, can serve as a powerful educational tool for the general public. The cause of removing a reality-show president needs a reality show of its own—a real one, with witnesses and testimony.

It really is time. We are not far from the day when some court—maybe even the Supreme Court—tells the president* to do something, and he tells the court to get stuffed. It will be too late to fire up the machine then. Better to have it warmed up and running already.

If Trump and his Republicans allies are successful in destroying our constitutional democracy and replacing it with a lawless authoritarian kleptocracy, like Russia, Trump will possess the autocratic power to redefine “treason” to mean whatever he wants it to mean, and use it to imprison and execute his political opponents and his perceived enemies — just as Vladimir Putin does in Russia. Trump is telegraphing that this is what he really wants to do. We should believe him because he has been so “transparent” about it.

If we do not resist and defend the Constitution and American democracy, we will surely lose it. And then the dark night of Trumpism, the new American fascism will descend upon the land.