I am seeing far too many pundits and reporters, some of whom are too young to have been around in the 1960’s, try to make the false analogy that the violence in America today is reminiscent of the tumultuous 1960’s. These are people I like to call “idiots.” Today is nothing at all like the 1960s. I know, I lived it.

We do not have cities burning from race riots and the national guard patrolling the streets of major cities to put down violence, and to protect police and firemen. We do not have anti-war protesters on college campuses and in Washington, D.C. being confronted by “hard hat” supporters of the war in Vietnam, the police, and the national guard. And we have not suffered a decade of assassinations of political and civil rights leaders.

There has never been an election year as violent and tumultuous as 1968, and God willing, there will never be another year like it again.

But apparently some geniuses (sic) advising Donald Trump have convinced him that running Richard Nixon’s 1968 p;aybook, complete with the Southern strategy of dividing America by appealing to racial animosity, imposing “law and order” against minorities and anti-war protesters, and appealing to a “silent majority” of Americans who support the war and getting tough on minorities and protesters, but who do not publicly speak out, is once again the path to victory in 2016.

Paul Waldman of the Washington Post writes, Trump is trying to re-run Nixon’s 1968 campaign. Here’s why it won’t work.

Judging by what he’s done over the last couple of days, Donald Trump seems to have decided that the way to win in November is to re-run Richard Nixon’s 1968 campaign. For those of you who weren’t around then, Nixon argued that the country had turned into a nightmare of chaos and violence, and only a strong leader like him could bring order and safety.

[For those of you not old enough to have seen this Nixon ad in 1968, it has been preserved online. It portrays a country being torn apart by protests and violence, and Nixon promising to restore order. 1968, Nixon – The First Civil Right – political ad.]

This is exactly the message Donald Trump is now sending. But it’s doomed to fail.

Let’s look, for instance, at what Trump said in his speech yesterday on veterans’ issues. He talked about “chaos,” “the ongoing catastrophe of crime in our inner cities,” and “an epidemic of violence.” Then he said this:

Too many Americans are trapped in fear, violence and poverty. Our inner cities have been left behind, and I am going to fight to make sure every citizen of this country has a safe home, safe school and safe community.

This is right in line with what has been the overarching theme of Trump’s campaign, which I refer to as, “America: What a Rathole.” Trump portrays the country as a place of unending despair, where we don’t make anything, nobody has a job, we never win, every other country laughs at us, and we exist in a state of constant misery.

This morning on Twitter, Trump continued with the litany on crime in particular. “Crime is out of control, and rapidly getting worse. Look at what is going on in Chicago and our inner cities. Not good!” He followed by: “This election is a choice between law, order & safety – or chaos, crime & violence. I will make America safe again for everyone.”

This is right out of the Nixon playbook — not only the repeated use of the antiquated term “inner cities,” which everyone understands is none-too-subtle code for “black,” but the general portrayal of the country as spinning out of control.

Nixon wrapped up a variety of kinds of disorder — crime, war, protests against that war and for civil rights — into a swirling miasma of threats and chaos that he would banish. But Trump can’t duplicate that message and have the same success Nixon did, for a couple of reasons. The first is that when Trump charges that crime is rapidly increasing, he’s either ignorant or lying. As you may know, the assertion isn’t just false, it’s 180 degrees false. In fact, crime in America has been dropping steadily for a couple of decades now. The violent crime rate today is less than half of what it was in the early 1990s, and homicides are at a historic low. Here’s a chart based on FBI crime statistics: 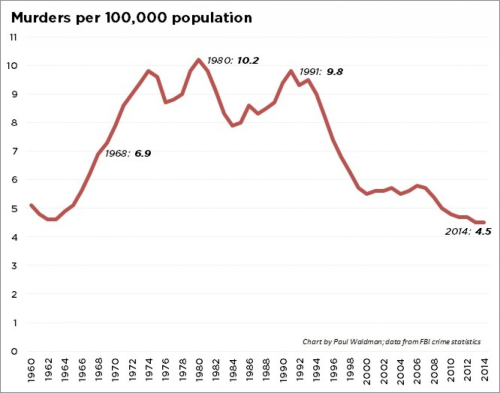 While people are certainly still concerned about crime, as a voting issue it doesn’t have nearly the urgency it did in the 1960s. And by the way, it’s also an unusually safe time to be a police officer, for all that cops have legitimate concerns about their safety. As Christopher Ingraham  notes, during Ronald Reagan’s administration,  an average of 101 cops were killed on the job each year. That number has declined in every subsequent administration; during the Obama years the average has been 61 per year.

President Obama has talked about these statistics in an effort to convince people that things in the country are not as bad as some would have us believe. He spoke about it the other day in his comments on the shootings of Alton Sterling and Philando Castile and the killings of the police in Dallas. “I think it’s just important to keep in mind that our crime rate today is substantially lower than it was five years ago, 10 years ago, 20 years ago, 30 years ago,” he said. “We should never be satisfied when any innocent person has been killed, but that should not be something that is driving our anxieties, relative to where we’ve been in the past.”

Donald Trump, on the other hand, is obviously working hard to make people feel as anxious as possible. Here’s part of his response to Obama, in an AP interview:

“When President Obama said the other day that he doesn’t think it’s as bad as people think, I think it’s far worse and certainly far worse than he believes it is,” Trump said. “We are in a divided nation. I looked two nights ago and you were having trouble in 11 different cities, big, big trouble. And the press actually plays it down.

“I mean, you were having big, big trouble in many cities. And I think that might be just the beginning for this summer.”

In other words: Be afraid, because more chaos is coming. But there’s an important reason, even more so than the drop in crime, why Trump can’t duplicate Nixon’s success with the law-and-order message: This is a very different country, demographically and politically, than it was in 1968.

[A]s Michael Tesler noted yesterday, it isn’t possible today for Trump to do the same thing [as Nixon] for a number of reasons. First, the parties have polarized in their opinions on race. While white Democrats in 1968 had very similar ideas as white Republicans, today white Democrats think more like minority Democrats. White Democrats today overwhelmingly support the Black Lives Matter movement and believe that African-Americans are treated less fairly by the police than whites. Trump’s racially divisive appeals won’t work with them. And most importantly, while the electorate was around 90 percent white in 1968, most projections say that in the 2016 election it will be only around 69 percent white.

When Richard Nixon said he spoke for the “silent majority,” there really was a majority behind him. Today, Donald Trump is saying many of the same things. But the people he’s speaking for aren’t silent, and they aren’t a majority.

Trump, meanwhile, is reading from the same script, but reality keeps getting in the way. Take this tweet from this morning, for example.

“Crime is out of control, and rapidly getting worse. Look what is going on in Chicago and our inner cities. Not good!”

I don’t doubt that some of the GOP candidate’s supporters nodded along in agreement when they read this, but crime isn’t out of control and it’s not rapidly getting worse. Violent crime rates have steadily improved over the last generation, and homicide rates are actually lower now than in 1968. (See above).

“We’ve also seen increasing threats against our police, and a substantial rise in the number of officers killed in the line of duty.”

Again, perceptions might make it seem like this is true, especially after Thursday night’s tragic mass-shooting in Dallas, but violent crimes against U.S. police officers has improved dramatically in recent years, and has reached levels unseen in modern American history.

Trump, in other words, is running Nixon’s playbook without Nixon’s circumstances.

It’s possible the gambit will work anyway, Trump’s dishonesty and ignorance notwithstanding, because public perceptions are also out of line with the evidence. For many Americans, it seems like violent crime is spiraling out of control, even though it’s not, and there’s an appearance of increased violence directed at the police, even though there isn’t.

Trump benefits from the confusion, exploiting public misunderstandings. But for those who care about reality, Nixon at least had some basic factual details to use for political purposes. Trump doesn’t.

Trump is committed to the same fallacy that too many in the media are guilty of, namely trying to draw an analogy and lessons from one election to another: “This election is just like the election of   insert year here  .”  No two elections are alike, each election has a unique electorate and a unique set of issues that are drivers for that electorate.