Home/Courts & Law, National Elections/Donald Trump Says He Intends to Use Federal Judges to Steal The Election
Previous Next

Last week, in-person early voting began in several states, including Virginia (above). Long lines of voters motivated to vote early formed, even before the death of Justice Ruth Bader Ginsburg on Friday.

Already, Donald Trump’s MAGA red caps, his version of Italian “black shirts” and German “brown shirts” fascist militias, whom he has encouraged to engage in illegal voter intimidation at the polls did just that. Trump Supporters Disrupt Early Voting in Virginia:

A group of Trump supporters waving campaign flags disrupted the second day of early voting in Fairfax, Va., on Saturday, chanting “four more years” as voters entered a polling location and, at one point, forming a line that voters had to walk around outside the site.

County election officials eventually were forced to open up a larger portion of the Fairfax County Government Center to allow voters to wait inside away from the Trump enthusiasts.

Election officials said that the group stayed about 100 feet from the entrance to the building and, contrary to posts on social media, were not directly blocking access to the building. But they acknowledged that some voters and polling staff members felt intimidated by what some saw as protesters.

“Citizens coming into and leaving the building did have to go by them,” Gary Scott, the general registrar of Fairfax County, said in a statement. “Those voters who were in line outside of the building were moved inside and we continued operations. Some voters, and elections staff, did feel intimidated by the crowd and we did provide escorts past the group. One of the escorts was the county executive.”

As you can see here they are blocking the entrance to the voting site. #EarlyVoting #VA #FairFax pic.twitter.com/KJ6fbLdP3G

In an unnerved electorate, where concerns about voting rights and safely voting amid the coronavirus pandemic are at a fever pitch, the demonstration outside of a polling place served as preview of a likely contentious election season, and how groups may be utilizing tactics that rattle or even deter voters over the next six weeks.

The disruption came as President Trump has repeatedly sought to undermine confidence in the upcoming election, spreading falsehoods about voting by mail and declaring the election “rigged” before any votes have even been cast.

The demonstration originated from a “Trump Train” parade that began in nearby Prince William County and featured Tommy Hicks Jr., the current Republican National Committee co-chairman. The event was set to end in the parking lot of the government center, which was also serving as the polling location on Saturday. Some of the people who attended the parade walked over to vote. Others gathered outside and began chanting, “four more years, four more years!”

Sean Rastatter, a vice chair at the Fairfax County Republican Committee who was at the polling location, said that he did not think any actions came close to voter intimidation.

Quick! Someone call the waaaambulance! https://t.co/b01QbLZwOr

Bryan Graham, the chairman of the Fairfax County Democrats who was also at the polling center, saw it differently, writing on Twitter that “the Republicans are straight-up attempting to intimidate voters at the government center.”

In an interview, Mr. Graham said he’d “never seen or heard of anything like this happening before.”

“I was there when the county executive was there and I saw him walk multiple people through the crowd because they didn’t feel safe,” Mr. Graham said. “I don’t think it’s appropriate. We shouldn’t be doing things to make people feel unsafe.”

This is the pre-election day voter intimidation and voter suppression tactics that Donald Trump and his cult of MAGA red caps intend to use to suppress the vote.

Donald Trump said he is “counting on the federal court system” to ensure that the winner of the November presidential election is called just hours after the polls close, despite current rules across the country allowing ballots to be counted several days to weeks after the election.

“Now we’re counting on the federal court system to make it so that we can actually have an evening where we know who wins. Not where the votes are going to be counted a week later or two weeks later,” he said at a rally in North Carolina Saturday.

Rep. Don Beyer (D-Va.) called out Trump’s comments on Twitter, arguing that the president wants to “use the federal courts to cheat in November by denying Americans’ lawfully cast mail-in ballots.”

“This is an open admission that Trump hopes to use the Supreme Court to steal the election,” he added.

34 states plus the District of Columbia now allow voters in the weeks before an election to request an absentee or early mail-in ballot (Map: NBC Plan Your Vote). 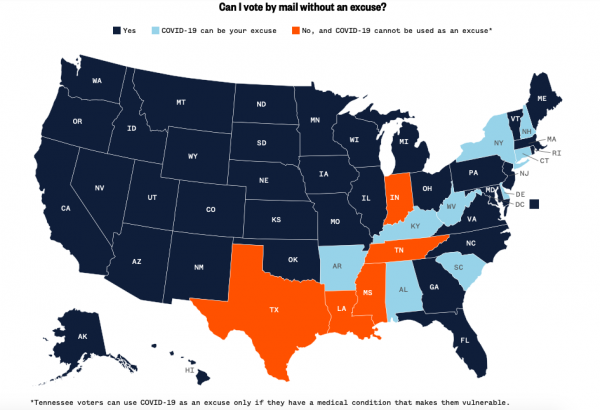 As anyone who was alive and sentient in 2018 will recall, it took several weeks to count all of the mail ballots to decide close races, including here in Arizona. There are going to be substantially more mail ballots cast this year because of the coronavirus pandemic.

What Donald Trump is saying is that he intends to appeal to conservative activist judges whom he and Sen. Mitch McConnell have appointed to the federal courts to stop the counting of lawfully cast early mail-in ballots — likely the majority of ballots to be cast this year during a pandemic — to disenfranchise the lawfully cast vote of millions of Americans who voted early by mail. Several states allow mail ballots postmarked by election day to be counted if received in a specified period of days after election day.

Arizona Citizens Clean Elections: “Ballot by mail has been available in Arizona for over two decades and approximately 80% of Arizona voters already choose this method to vote.” Donald Trump is declaring that he intends to disenfranchise Arizonans of our lawfully cast vote. Are you going to stand for this?

The 1887 Electoral Count Act says the Electoral College, the constitutionally established body that elects the president, must meet no more than 41 days after Election Day. This year, that date is December 14.

As law professors Larry Diamond and Edward Foley explain at The Atlantic, The Terrifying Inadequacy of American Election Law (excerpt):

[T]he country’s laws on presidential elections provide a shockingly inadequate guide for resolving an Electoral College dispute. Twice in the past century and a half (in 1876 and 2000), the country narrowly averted a catastrophic deadlock over the presidential-election outcome. We may not be so fortunate in 2020.

Imagine that the presidential race in these states is still not clearly decided when, on December 8, the federal “safe harbor” period closes and states must certify who has garnered their electoral votes. Some mail-in ballots could remain to be counted, or disputes might persist about the validity of some ballots. Perhaps after trailing on Election Night, Biden has come from behind to take a lead as the mail-in ballots are counted. Following Trump’s fear mongering, Republicans might claim fraud. Or perhaps controversy arises over how closely the signatures on mail-in ballots match those in the voter-registration database. Then what?

Some have speculated that confusion will reign to the point that (under the Twelfth Amendment, ratified in 1804) the president will be elected by the House (with each state delegation casting one vote) and the vice president by the Senate. The much more likely scenario, however, is that partisan politics will drive decisions in each state—and quite possibly dueling decisions in some states …. a close election with an unresolved outcome could produce a scenario in which the state legislature certifies Trump’s electors and the governor certifies Biden’s electors—and both candidates claim to have been elected president.

If this happens, the situation will be so much worse than Bush v. Gore, which ended the contest over the 2000 election in early December, long before it risked engulfing the nation in two conflicting claims to the presidency on January 20.

The authors then speculate about a catastrophic scenario which is all but implausible, given what we know about this election at the moment (subject to change).

The real question here is why would any American vote for a presidential candidate who is openly declaring that he intends to steal the election?

Why would any American vote for a presidential candidate who is openly declaring that he intends to disenfranchise you of your legally cast vote?

Why would any American support a presidential candidate and a political party that have devoted $20 million dollars (so far) to challenging state election laws to make it more difficult for you to vote?

Why would any American support a presidential candidate and a political party whose election strategy is to illegally intimidate voters and to suppress voter turnout?

What kind of American supports a presidential candidate and a political party that have systematically destroyed democratic institutions and norms, and have engaged in lawless corrupt behavior with impunity?

What kind of American supports a presidential candidate and a political party that wants to end the great American experiment with democracy, and to replace it with authoritarian fascism in which elections no longer matter?

What kind of American is OK with living under a white nationalist, Christian nationalist authoritarian autocracy? Who are these enemies of American democracy? WTF is wrong with you?

And why does anyone, especially the media, treat this as just “normal” politics?

No patriotic American who loves their country would ever support this in their wildest dreams.

This election is going to require a massive blue wave that sweeps every Republican enabler of Donald Trump out of office, from president down to your local school board. This sick GOP flirtation with authoritarian fascism must be brought to an end, here and now. It is a time for choosing.