Congressional Tea-Publicans, to borrow a term from football, are going to a spread offense with five receivers to flood the zone with Trump’s cabinet nominee confirmation hearings this week. 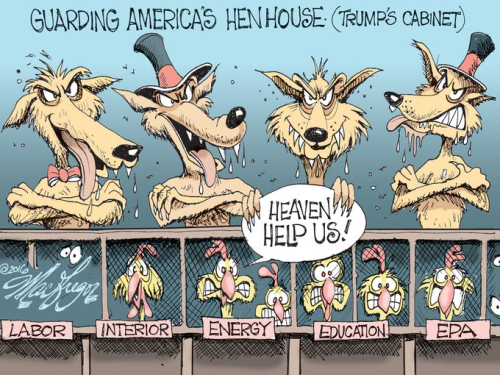 Cabinet nominees are not supposed to get a confirmation hearing until they have completed their background check by federal law, but our authoritarian Tea-Publicans say “Meh, we’re going to jam through Trump’s nominees this week without completing their background checks. Laws are for little people, not for millionaire and billionaire Plutocrats!” Senate Confirmation Hearings to Begin Without All Background Checks:

As Senate Republicans embark on a flurry of confirmation hearings this week, several of Donald J. Trump’s appointees have yet to complete the background checks and ethics clearances customarily required before the Senate begins to consider cabinet-level nominees.

Republicans, who are expected to hold up to five hearings on Wednesday alone, say they simply want to ensure that the new president has a team in place as soon as possible. “I believe all the president-elect’s cabinet appointments will be confirmed,” Senator Mitch McConnell of Kentucky, the majority leader, said.

But Democrats are calling for the process to be slowed and for the hearings to be spread out. That, they say, would allow more time to vet the nominees. “Our first overarching focus is getting tax returns and ethics forms,” said Senator Amy Klobuchar, Democrat of Minnesota.

In a letter to Senators Chuck Schumer of New York and Elizabeth Warren of Massachusetts, the leader of the Office of Government Ethics, Walter M. Shaub Jr., said on Friday that “the announced hearing schedule for several nominees who have not completed the ethics review process is of great concern to me.” More, Ethics official warns against confirmations before reviews are complete:

The schedule “has created undue pressure on OGE’s staff and agency ethics officials to rush through these important reviews,” Shaub wrote in response to an inquiry by Democratic senators. “More significantly, it has left some of the nominees with potentially unknown or unresolved ethics issues shortly before their scheduled hearings.”

Shaub added: “I am not aware of any occasion in the four decades since OGE was established when the Senate held a confirmation hearing before the nominee had completed the ethics review process.”

Ethics experts from both political parties expressed dismay at the possibility that confirmation hearings would proceed before the OGE reviews are completed.

“This is unprecedented,” said Trevor Potter, former chairman of the Federal Election Commission who has served as counsel to several Republican presidential candidates and Cabinet nominees in the past. “This suggests that there has been a real breakdown between the transition and the Office of Government Ethics.”

Mr. Schumer responded on Saturday by saying that the letter had made clear that the Trump transition team colluded with Senate Republicans to “jam through” the nominees. Several of the nominees are millionaires or billionaires and have vast webs of financial interests that must be untangled.

The Trump transition team issued a statement on Saturday evening defending its handling of the nomination process.

Richard W. Painter, a law professor at the University of Minnesota who served as chief ethics counsel to President George W. Bush, said he thought none of the nominees could receive a full vote on the Senate floor before the vetting was complete. Norman Eisen, Mr. Obama’s ethics counsel in his first term, said the paperwork delays were “totally unheard-of.”

The hearings are scheduled to begin on Tuesday, with testimony from Senator Jeff Sessions of Alabama, the nominee for attorney general, and Gen. John F. Kelly, the pick for homeland security secretary. On Wednesday, the parade of nominees is expected to include Rex W. Tillerson, the choice for secretary of state; Betsy DeVos, the pick for education secretary; and Representative Mike Pompeo of Kansas, the nominee to lead the C.I.A. Later in the week, the billionaire investor Wilbur L. Ross Jr., chosen as commerce secretary, and Andrew F. Puzder, the labor secretary pick, are scheduled to come before congressional panels.

Ready or Not, Republicans Say Cabinet Hearings Will Begin Tuesday:

Advisers to President-elect Donald J. Trump’s transition team, facing complaints from Democrats that they are trying to jam nominees through confirmation hearings, said on Sunday they were confident all the appointees would be approved by the Senate, perhaps even with Democratic support.

Being the minority party, the Democrats would face long odds in trying to derail any of the nominations. They are, however, seeking to delay Republicans’ plans to open hearings on Tuesday until the nominees have completed F.B.I. background checks.

Senator Mitch McConnell of Kentucky, the majority leader, signaled on Sunday that he was unwilling to reschedule any confirmation hearings, which are set to begin with sessions for John F. Kelly, Mr. Trump’s choice to be the secretary of Homeland Security, and for Senator Jeff Sessions of Alabama, the nominee to be attorney general. Five more hearings are scheduled for Wednesday.

Mr. McConnell dismissed the Democrats’ complaints as sour grapes during an appearance on CBS’s “Face the Nation.”

“All of these little procedural complaints are related to their frustration at having not only lost the White House, but having lost the Senate,” Mr. McConnell said.

Sorry you partisan S.O.B., but it is the law! “A chosen nominee must pass through a series of investigations by the Federal Bureau of Investigation, Internal Revenue Service, the Office of Government Ethics and an ethics official from the agency to which the position is assigned. The nominee must also fill out the Public Financial Disclosure Report and questionnaires related to his or her background check.” Appointment confirmation process.

The majority leader said that while the vetting process for some nominees might not be completed in time for their hearings, he was optimistic it would be finished before the Senate votes on each of the nominees.

The vetting process occurs at committee hearings, not at the later confirmation vote. It’s too late then.

McConnell’s excuse? “We’ve done it before” — yes, for Georg W. Bush’s nominees the last time the GOP was in control: IOKIYAR. McConnell: Democrats need to ‘grow up’ and let Trump nominees get confirmed:

He added: “Until these nominees have fully cooperated with the ethics review process, the hearings and confirmation schedule should not be rushed.”