I warned you about this last week. Inspector General Michael Horowitz’s review of the Russia investigation to drop soon.

Republican Sen. Lindsey Graham, whose stock has risen in conservative circles since he became a close ally of President Trump, has come under fire in recent weeks from right-wing media personalities who do not think he has done enough to probe supposed Democratic corruption.

The right-wing media personalities — including heavyweights such as Tucker Carlson, Lou Dobbs, Rush Limbaugh, and others — have suggested Graham is failing the President by not using his power as the chair of the Senate Judiciary Committee to investigate the origins of the Russia probe and, most recently, the impeachment inquiry.

Graham in May promised that the Senate Judiciary Committee — which is responsible for oversight of the Justice Department, including the Federal Bureau of Investigation — would “look long and hard” into how the investigation into the Trump campaign’s interactions with Russia during the 2016 presidential election started. He then repeated that it was necessary to probe the origins of the Russia investigation in interviews with the media.

But such hearings have not materialized. In recent weeks, the Ukraine scandal has put conspiracy theories related to the origins of the Russia probe back in the spotlight.Right-wing media personalities, in addition to Trump himself, have recently resurfaced a debunked conspiracy theory that Ukraine, and not Russia, hacked the Democratic National Committee’s emails in 2016. The theory is popular in pro-Trump circles because it lets Russia off the hook for election interference, and suggests Special Counsel Robert Mueller’s probe was unnecessary and had corrupt origins.

The Justice Department has opened up a probe into the origins of the Trump-Russia investigation.

But Graham is now facing scrutiny for not delivering on his word.

The craven coward Lindsey “Stonewall” Graham now appears ready to deliver on his promise for the pro-Russian propagandists of the conservative media entertainment complex propaganda machine.

Horowitz’s scheduled appearance before the committee comes as the inspector general is wrapping up an investigation into the origins of the FBI probe into the 2016 Trump campaign’s dealings with Russia.

The IG report, which is expected to be released imminently, will examine whether the FBI violated surveillance laws or policies by obtaining a Foreign Intelligence Surveillance Act warrant to look into Carter Page, a Trump campaign adviser, who drew scrutiny from the intelligence community for his ties to Moscow.
Story Continued Below

In a statement announcing the hearing, Graham described Horowitz as “a good man that has served our national well.”

“I appreciate all the hard work by Mr. Horowitz and his team regarding the Carter Page FISA warrant application and the counterintelligence investigation of the Trump campaign,” Graham said.

The South Carolina Republican added that Horowitz “will deliver a detailed report of what he found regarding his investigation, along with recommendations as to how to make our judicial and investigative systems better.”

This anodyne reporting is just the opening salvo. As Michael Tomasky presciently warned earlier this year at The Daily Beast, You Think It’s Bad Now? Wait for Next Year’s Show Trials (excerpt):

The plan here is to wait for the report from the Justice Department inspector general (that’s Horowitz) to hit next month, pry whatever passages they can out of that report to go on Pravda TV [FOX News aka Trump TV], and stitch together the appearance of a vast, deep state conspiracy to take Trump down.

Then wait again, this time for Attorney General Bill Barr to do his part. Trump’s announcement Thursday that Barr would be in charge of releasing the intel on the Trump campaign probe is a staggering development, something we’ve never seen the likes of. Barr, who already demonstrated he’ll cherry pick evidence on Trump’s behalf, can pluck out whatever evidence he wants and leave buried whatever evidence he wants to leave buried. 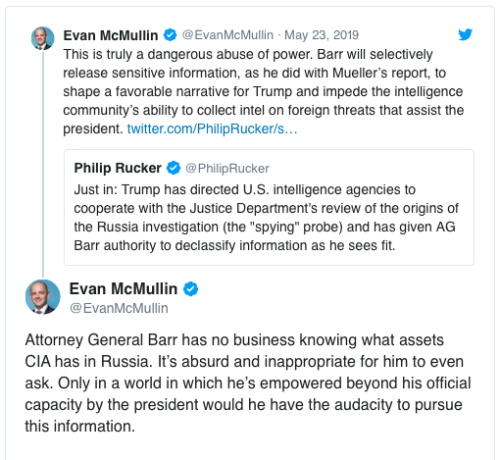 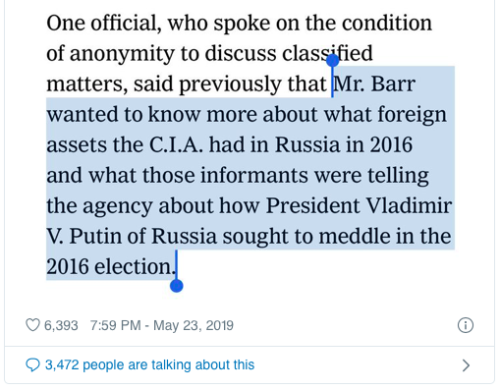 But with everything filtered through a state television network [FOX News aka Trump TV] and no Republicans in Congress willing to utter a syllable of protest, there will be no accountability.

And then, next spring (what a coincidence, election year!), Barr’s Justice Department can bring indictments against James Comey, Andy McCabe, Peter Strzok, and Lisa Page for—well, they’ll come up with something. And maybe John Brennan and James Clapper too.

Welcome, folks, to the first Stalinist show trials in the history of our country.

Justice has been miscarried in this country in a hundred different ways a thousand different times, usually with poor people, black people, or political radicals getting the short end of the stick. That’s not defensible, but it’s old hat, and it happens everywhere, not just in America.

What we have not seen in America, not even during the McCarthy era, is an orchestrated effort of this sort with the goal, if Corey Lewandowski is to be believed, and I don’t see why he shouldn’t be, of sending political opponents to jail.

This is not Stalin’s Russia. They may not be able to pull it off. They may get an unlucky draw on the judge. A jury of Peter Strzok’s peers may determine he did nothing wrong.

But it won’t be for lack of trying. And if all goes to plan, the trials will stretch into the summer, into the fall, close to November. You can’t miss the point of that.

So yes, next year’s campaign will be a nightmare beyond the imagination of any novelist who has yet tried to capture and describe totalitarian, hall-of-mirrors horror, from Koestler to Orwell to Kundera or anyone else. They were all describing how a regime gets away with it in a totalitarian state. But these people will be getting away with it in a democracy.

Don’t say you didn’t receive fair warning. Buckle up, America, this is the existential conflict of our lifetime. America must choose between a future of authoritarian Trumpism, or to preserve our democracy. The time for choosing is now. History will be our judge.