#FascistFinchem Lives In A Bubble: He Doesn’t Know Any Biden Voters, So Biden Couldn’t Have Won 🙄

Home » #FascistFinchem Lives In A Bubble: He Doesn’t Know Any Biden Voters, So Biden Couldn’t Have Won 🙄
Previous Next

#FascistFinchem Lives In A Bubble: He Doesn’t Know Any Biden Voters, So Biden Couldn’t Have Won 🙄

The biggest problem with Mark Finchem’s Big Lie election denying conspiracy theory: if the presidential race – and let’s not forget they also questioned the senate race – was fraudulent, how is it that we are supposed to believe that every other contest on the ballot for state, county, local and ballot measures, and judicial retention or election of judges, was perfectly legitimate? These damn election deniers argue “my election was perfect, but Joe Biden’s win had to have been a rigged election.” That’s just the musings of a partisan sore loser living in denial.

But it is also a revelation of a much larger problem: Too many Republicans have come to believe that only Republicans winning elections is legitimate, and a Democrat winning an election therefore, by definition, must be illegitimate. They thus seek to delegitimize Democrats, and the democratic electoral process. If only Republicans winning elections is legitimate, then why even have opposition parties or hold elections? Just declare the Republican the winner and let’s be done with this messy nonsense of democracy and elections. They want permanent GQP authoritarianism.

Laurie Roberts of The Republic writes, Mark Finchem’s startling admission should disqualify him from being secretary of state:

After nearly two years of waiting, Rep. Mark Finchem has at long last revealed the source of his certainty that Arizona’s 2020 election was stolen.

The one who believes the Legislature should be able to veto your presidential vote and who now hopes to seize control of the 2024 elections by getting himself elected secretary of state ….

Has finally explained why he is so certain that the 2020 election was rigged.

It’s simple really, he explained, when a Time magazine reporter recently asked him why it was so difficult to believe that Joe Biden won Arizona.

“It strains credibility,” he replied. “Isn’t it interesting that I can’t find anyone who will admit that they voted for Joe Biden?”

When pressed about whether it was possible that plenty of people he didn’t know personally may have voted for Biden, here was Finchem’s answer:

“In a fantasy world, anything’s possible,” he said.

Denial is not just a river in Egypt (rim shot).

So, Joe Biden couldn’t possibly have won Arizona because Finchem doesn’t [personally] know anyone who voted for him.

Forget all the safeguards built into state law that are designed to produce a fair election. Forget all the auditing and the hand counting of ballots that reinforced Biden’s narrow victory. Forget the multiple independent experts who examined Maricopa County’s tabulation machinery and determined it wasn’t hacked and, in fact, wasn’t even hooked up to the internet.

Finchem and all of his friends voted for Donald Trump; therefore, Donald Trump must have won the election and any other outcome is evidence that fraud was afoot. (See my point in the intro).

Now Finchem is hoping voters will put him in charge of the 2024 election in a key battleground states that could well decide the presidential race.

It is a fair question for Arizonans – and Americans – to wonder whether Finchem will employ the same imaginary standard in 2024, should he become the state’s elections chief.

Cue Time’s Charlotte Alter: If Biden wins Arizona in 2024, she asked, would you certify that result as secretary of state?

“If the law is followed, and legitimate votes have been counted, and Joe Biden ends up being the winner,” he replied. “I’m required under the law – if there’s no fraud – to certify the election.”

Then he added, “I think you’re proposing something that, quite frankly, is a fantasy.”

Are you listening, Arizona?

Save America? This slate could nix democracy 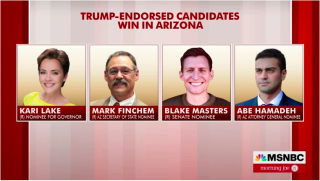 The Trump-endorsed Republican who wants to run our elections – the one who in May told his supporters in an email had he been in charge in 2020, “We would have won. Plain and simple” – just said there is no conceivable way that Biden could legitimately win Arizona in 2024.

That he would refuse to certify an election if he doesn’t like the result.

Add in the fact that Finchem could be joined by Kari Lake as governor and Abe Hamadeh as attorney general. These Trump-endorsed candidates, like Finchem, dispute the results of the 2020 popular vote.

And they, like Finchem, could very well win in November. Democrat Katie Hobbs isn’t putting up enough of a fight in the governor’s race. Former Maricopa County Recorder Adrian Fontes (secretary of state) and former Corporation Commissioner Kris Mayes (attorney general) are running decent campaigns, but their races don’t typically attract much attention from voters, who tend to toe the party line in down-ballot races.

Get a clue lady: You have a platform to focus as much attention on these races as you want.

Meanwhile, Republicans likely have a 6- or 8-point edge, given historical turnout in midterm elections.

This is not a “normal” election in a “normal” year. It is the first election after a seditious insurrection against the U.S. government by the Republican Party, for which they should all be disqualified from office by the 14th Amendment. It is the first election after a radical Republican U.S. Supreme Court has reversed a fundamental constitutional right to half of the population, the female population, after almost 50 years. The Party of Trump is an existential threat to to the survival of American democracy and it must be defeated. This is the only message you should be focused on, lady.

Lake has said she would not have certified the 2020 election results. She has even called for the arrest of her opponent, Secretary of State Hobbs, despite the lack of any evidence of fraud. Hamadeh, too, has said the election was stolen. He’ll do whatever Lake tells him to do.

Save America? Arizona could well be the state that throws the country into chaos and democracy out the door.

Unless a [Republican] candidate of their choosing wins, that is.

Either that, or Finchem grows a larger circle of friends.