When historians write the history of the politics of our era there will be two great villains identified who were most responsible for the destructive scorched earth hyper-partisan politics that has undermined America democracy: former House Speaker Newt Gingrich, The Man Who Broke Politics, and his ideological successor, Senate Majority Leader Mitch McConnell, the man who broke America. Both men continue to actively seek to undermine our democracy in favor of their right-wing wealthy plutocrat benefactors whom they serve.

David Frum at The Atlantic takes a deep-dive into the depravity of Mitch McConnell, building upon the dark portrait of McConnell recently painted by Jane Mayer, How Mitch McConnell Became Trump’s Enabler-in-Chief, to explain Why Mitch McConnell Wants States to Go Bankrupt:

American states are abruptly facing their worst fiscal crisis since the Great Depression. The Center on Budget and Policy Priorities estimates that more than 25 percent of state revenues have evaporated because of the pandemic. Demands on state health-care budgets, state unemployment systems, and state social-welfare benefits are surging. By the summer of 2022, the state budget gap could total half a trillion dollars. 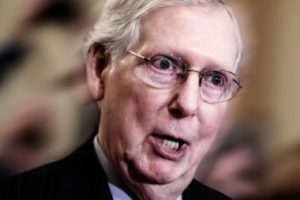 States need help. Senate Majority Leader Mitch McConnell does not want to provide it. On The Hugh Hewitt Show on April 23, McConnell proposed another idea. Instead of more federal aid, states should cut their spending by declaring bankruptcy:

I would certainly be in favor of allowing states to use the bankruptcy route. It saves some cities. And there’s no good reason for it not to be available. My guess is their first choice would be for the federal government to borrow money from future generations to send it down to them now so they don’t have to do that. That’s not something I’m going to be in favor of.”

This would require a change in the federal bankruptcy law, because sovereign states are not permitted to file for bankruptcy, anymore than the federal government can.

In a press release on the Hewitt interview, McConnell’s office summarized the senator’s remarks under the headline, “Stopping Blue State Bailouts.” McConnell never passes up the opportunity to be a sneering hyper-partisan asshole.

McConnell expanded on the state-bankruptcy concept later that same day in a phone interview with Fox News’s Bill Hemmer:

“McConnell’s dismissive remark that States devastated by Coronavirus should go bankrupt rather than get the federal assistance they need and deserve is shameful and indefensible,” King said. “To say that it is ‘free money’ to provide funds for cops, firefighters and healthcare workers makes McConnell the Marie Antoinette of the Senate.”

“That is one of the saddest, really dumb comments of all time,” Democratic Gov. Andrew Cuomo told public radio station WAMC.

“Let’s have all the states declare bankruptcy. That’s the way to bring the national economy back,” Cuomo said sarcastically. “When are they going to stop with the partisanship? Not even on life and death? I mean, it’s so ridiculous.”

Cuomo said, if it was a question of “fairness, New York State puts much more into the federal pot than it takes out.”

How do you think this is going to work? And then to suggest we’re concerned about the economy, states should declare bankruptcy. That’s how you’re going to bring this national economy back? By states declaring bankruptcy? You want to see that market fall through the cellar? … I mean, if there’s ever a time for humanity and decency, now is the time. 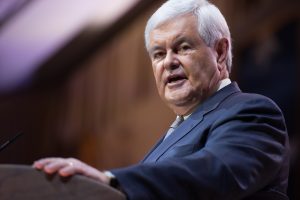 Cuomo’s fervent rebuttal grabbed the cameras. It did not settle the issue. State bankruptcy is not some passing fancy. Republicans have been advancing the idea for more than a decade. Back in 2011, Jeb Bush and Newt Gingrich published a jointly bylined op-ed advocating state bankruptcy as a solution for the state of California. The Tea Party Congress elected in 2010 explored the idea of state bankruptcy in House hearings and Senate debates. Newt Gingrich promoted it in his run for the 2012 Republican presidential nomination.

A bankruptcy is not a default. States have defaulted on their debts before; that is not new. Arkansas defaulted in the depression year of 1933. Eight states defaulted on canal and railway debt within a single year, 1841. The Fourteenth Amendment required former Confederate states to repudiate their Civil War debts.

A default is a sovereign act. A defaulting sovereign can decide for itself which—if any—debts to pay in full, which to repay in part, which debts to not pay at all.

Bankruptcy, by contrast, is a legal process in which a judge decides which debts will be paid, in what order, and in what amount. Under the Constitution, bankruptcy is a power entirely reserved to the federal government. An American bankruptcy is overseen in federal court, by a federal judge, according to federal law. That’s why federal law can allow U.S. cities to go bankrupt, as many have done over the years. That’s why the financial restructuring of Puerto Rico can be overseen by a federal control board. Cities and territories are not sovereigns. Under the U.S. Constitution, U.S. states are.

Understand that, and you begin to understand the appeal of state bankruptcy to Republican legislators in the post-2010 era.

Since 2010, American fiscal federalism has been defined by three overwhelming facts.

Here is the most recent breakdown from WalletHub from March of this year. Most & Least Federally Dependent States. Mitch McConnell’s Kentucky is the 5th most federally dependent state. As Senate Majority Leader, McConnell can direct federal pork barrel spending to his state over the more pressing needs of other states, which is how this evil GOP bastard manages to stay in power.

Second, Congress is dominated by Republicans. Republicans controlled the House for eight of the last 10 years; the Senate for six. Because of the Republican hold on the Senate, the federal judiciary has likewise shifted in conservative and Republican directions.

A state bankruptcy process would thus enable a Republican Party based in the poorer states to use its federal ascendancy to impose its priorities upon the budgets of the richer states.

In other words, a tyranny of the minority — even worse, a tyranny by a handful of right-wing wealthy plutocrats.

When Cuomo protested McConnell’s bankruptcy idea, the New York governor raised the risk of chaos in financial markets. But McConnell does not advocate state bankruptcy in order to subject state bondholders to hardship. Obviously not! When McConnell spoke to Hewitt about fiscally troubled states, he did not address their bond debt. He addressed their pension debt. State bankruptcy is a project to shift hardship onto pensioners while protecting bondholders—and, even more than bondholders, taxpayers.

Republican plans for state bankruptcy sedulously protect state taxpayers. The Bush-Gingrich op-ed of 2011 was explicit on this point. A federal law of state bankruptcy “must explicitly forbid any federal judge from mandating a tax hike,” they wrote. You might wonder: Why? If a Republican Senate majority leader from Kentucky is willing to squeeze Illinois state pensioners, why would he care about shielding Illinois state taxpayers? The answer is found in the third of the three facts of American fiscal federalism.

United States senators from smaller, poorer red states do not only represent their states. Often, they do not even primarily represent their states. They represent, more often, the richest people in bigger, richer blue States who find it more economical to invest in less expensive small-state races. The biggest contributor to Mitch McConnell’s 2020 campaign and leadership committee is a PAC headquartered in Englewood, New Jersey. The second is a conduit for funds from real-estate investors. The third is the tobacco company Altria. The fourth is the parcel delivery service UPS. The fifth is the Eli Lilly pharmaceutical corporation. The sixth is the home health-care company, LHC Group. The seventh is the Blackstone hedge fund. And so on and on.

A federal bankruptcy process for state finances could thus enable wealthy individuals and interest groups in rich states to leverage their clout in the anti-majoritarian federal system to reverse political defeats in the more majoritarian political systems of big, rich states like California, New York, and Illinois.

No question, many states face serious problems with their unfunded liabilities to state retirees. Illinois’s liability nears $140 billion, and its municipalities are liable for additional billions. California’s state and local unfunded liabilities amount to $1.5 trillion.

Difficult and important as these problems are, they are not urgent problems. They existed 24 months ago; they will remain 24 months from now. From a strictly economic point of view, McConnell’s schemes for state bankruptcy are utterly irrelevant to the present crisis. Reducing future pension liabilities will not replenish lost revenues or reduce suddenly crushing social-welfare burdens.

But McConnell seems to be following the rule “Never let a good crisis go to waste.” He’s realistic enough to recognize that the pandemic probably means the end not only of the Trump presidency, but of his own majority leadership. He’s got until January to refashion the federal government in ways that will constrain his successors. That’s what the state-bankruptcy plan is all about.

McConnell gets it. Now you do, too.

In other words, McConnell is seeking to sabotage the next president, presumably Joe Biden, in the same way he sabotaged President Barack Obama at the height of the Great Recession economic crisis. Then Senate Minority Leader Mitch McConnell summed up his plan to the National Journal: “The single most important thing we want to achieve is for President Obama to be a one-term president” — not to rescue America from the worst economic crisis since the Great Depression.

McConnell then adopted a policy of “total obstruction,” abusing the Senate filibuster to an unprecedented degree, and holding the country hostage over the federal debt ceiling and the “fiscal cliff” with government shutdowns.

Mitch McConnell is morally bankrupt and disloyal. His loyalty is not to America or the Constitution, but only to a handful of right-wing wealthy plutocrat benefactors whom he serves.

These anti-democratic wealthy right-wing plutocrats believe they are more entitled and more deserving than the rest of some 330 million Americans. They need to be “Voted off the island,” and end their tyranny of the minority.

State and local governments employ 13 percent of the U.S. workforce, making them a significant economic sector.

“If you want to send the country into an extended depression, sending state and local governments into bankruptcy is a great way to do it,” said a local government budget expert, who spoke on the condition of anonymity because they were not authorized to speak publicly.

“If you look at what happened in the last recession, it gives you a preview of what would happen if there’s not additional federal state fiscal relief,” Commonwealth Institute President Michael Cassidy said. “In the last recession, Virginia cut state funding for public education more deeply than only a small handful of states. … It was very much a lost decade of public school investment.”

Ditto for Arizona. Arizona’s GOP leaders have no serious plans to make up for the ‘lost decade’ of budget cuts. The “first thing” Republicans always cut in a budget crisis is public education.