The most powerful politician in America is not President Donald Trump, but House Speaker Nancy Pelosi. Trump can get none of what he wants — his “big beautiful wall” on the Mexico border, his weak-ass NAFTA 1.1, his mythical infrastructure bill, the required federal budget, etc. — without the support and at least the tacit approval of Nancy Pelosi in the House.

The sexist and misogynist Trump does not know how to deal with a powerful woman. He is utterly emasculated. And right now, Nancy Pelosi is living inside Donald Trump’s brain rent free. Pelosi can pawn Trump at will. She owns him.

Cody Fenwick writes, Nancy Pelosi showed once again how she can easily manipulate Trump — and he fell right into her trap (excerpted paragraphs have been reordered):

Democrats were never going to get a deal with Republicans on infrastructure.

House Speaker Nancy Pelosi and Senate Minority Leader Chuck Schumer played along with President Donald Trump’s pretense at wanting to move forward with $2 trillion overhaul of the country’s infrastructure, but anyone who knew the basic dynamics of Washington, D.C. saw it for the farce that it was.

Pelosi and Schumer knew there would be no infrastructure deal. Trump knew it too. On Tuesday night, he had tried to wriggle out of having to provide details for actually funding a push on infrastructure.

So why did Pelosi and Schumer play along? On Wednesday, Trump showed why.

“I want to do infrastructure,” he said. “But you know what, you can’t do it under these circumstances.”

This tantrum seemed inspired, at least in part, by Pelosi’s comment earlier in the day that Trump is engaged in a “cover-up.”

“I don’t do cover-ups,” Trump declared. Even though we know that he does.

Phillip Bump of the Washington Post provides a handy guide to The various coverups of Donald ‘I don’t do coverups’ Trump. This was history rhyming, recalling Richard Nixon’s infamous “People have got to know whether or not their President is a crook. Well, I’m not a crook. I’ve earned everything I’ve got.”(also in reference to his taxes, and yes, it turned out he was a crook).

In short, Pelosi’s control of the House of Representatives is becoming his waking nightmare.

By encircling Trump with investigations and taunting him with accusations of a cover-up, Pelosi put him on the defensive. And when Trump is defensive, he lashes out in erratic and unstrategic ways, as we’ve seen before. When James Comey testified about their private conversations, Trump pledged that he would testify under oath that Comey had lied. When Pelosi and Schumer tussled with Trump in December 2018 about funding a border wall and avoiding a government shutdown, Schumer goaded the president into saying he would “own” the shutdown — which he eventually did.

Finally, infrastructure itself was Trump’s campaign promise. Holding hostage something he promised to the American people because he doesn’t like being investigated is hardly a sympathetic position.

At the same time, Trump’s outburst exposed just how desperate he is and how spooked the investigations have made him.

I’ve been critical of much of Pelosi’s handling of the investigations so far, because I think she hasn’t treated Trump’s corruption and crimes with the urgency they deserve, and I think she has allowed Republicans to control too much of the messaging around the Mueller report … But while I disagree with some of Pelosi’s tactics, it’s clear she has a strategy she thinks works. And on Wednesday, she was in top form. She thinks the best bet to defeating Trump is by running on pocketbook issues that directly affect voters — that’s why the Democrats’ 2018 campaign focused on health care. She embraced a similar gambit in the fight over the government shutdown, which directly impacted the income of millions of workers, by standing up to Trump’s unreasonable demands and forcing him to take responsibility for the burdens placed on the American people. This time, she manipulated Trump into admitting that he’s the thing standing between the country and a major improvement to the national infrastructure — and she even managed to tie this failure to the president’s corruption. She will certainly count that as a win. 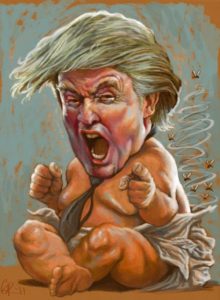 So now we have the spectacle of a mad man-baby president saying he will not fulfill his constitutional duties as long as mean Democrats continue to investigate his dirty deeds.

Well, I would suggest there is a simple and speedy solution to this, crybaby: resign and get the hell out of the White House. Take your toys and go running home to your tawdry Trump Tower.

E.J. Dionne picks up this thread, Don’t get it twisted. Trump is the one with the picket sign. (excerpts):

The framers could not have imagined a president like Trump.

They certainly never expected that a president would go on strike.

But that is what Trump did on Wednesday, throwing a tantrum at what was supposed to be a serious meeting with House Speaker Nancy Pelosi and Senate Minority Leader Charles E. Schumer about a big infrastructure plan. Trump then barged out and told waiting reporters that unless the House stopped investigating him — i.e., gave up on its responsibilities to hold him accountable — Americans would just have to keep driving on crumbling roads, crossing shaky bridges and riding on inadequate public transit systems.

He took umbrage at Pelosi accusing him of a “coverup” after a morning meeting with her Democratic caucus — even though the speaker’s comment was a logical response to Trump’s sweeping efforts to block the House from hearing witnesses and receiving documents that it has a right to request. That Pelosi is encouraging her caucus to hold back on impeachment inquiries was apparently lost on him.

Trump’s theatrics only hardened Pelosi’s view. After Trump’s stagey sulk, she told a gathering organized by the Center for American Progress: “The fact is, in plain sight in the public domain, this president is obstructing justice and he’s engaged in a coverup — and that could be an impeachable offense.” She also told the group she was praying for him and for our country.

She might usefully add our constitutional system to her prayerful petitioning, because there is one other thing our framers certainly didn’t have in mind: that extreme partisanship [GOP tribalism] would so obliterate institutional patriotism that congressional Republicans would put the interests of a power-abusing president over the legitimate rights and prerogatives of the legislative branch of government. Democrats should not have to be fighting Trump’s imperiousness on their own.

Again, I doubt that when the framers wrote the impeachment power into the Constitution, they expected it might be the only recourse left against a chief executive who is guided solely by an obsession with self-protection.

[I]n blowing up the talks on infrastructure, Trump has already assuaged one of the worries swing-district Democrats — that they’d be blamed if Washington doesn’t act on big issues. Now, everyone will know that it’s Trump who has little interest in governing or compromising. He’s the one with the picket sign, grinding government to a halt to keep his secrets.

As Dana Milbanks correctly notes, “This is not the work of an orderly mind.” Trump seems to be transparently mad: 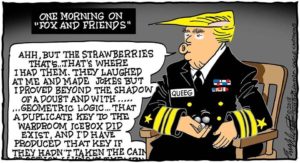 He raged on. House Judiciary Committee Chairman Jerrold Nadler (D-N.Y.) has “been an enemy of mine for many years.” The “whole thing was a takedown attempt.” The assembled press “ought to be ashamed of yourselves for the way you report it so dishonestly.” And, even though he was the one who blew up the infrastructure meeting, he just knew that Democrats were “not really thinking they wanted to do infrastructure or anything else other than investigate.”

Nobody seemed to know what to make of the explosion. White House officials reportedly said they tried to stop Trump from making the Rose Garden appearance. And for good reason: With Wednesday’s public announcement that he won’t negotiate with Democrats, the president has taken ownership of the lack of progress on infrastructure and other legislation — much the way he took ownership of the government shutdown.

And for what? … What changed, apparently, is the president’s state of mind. People often describe him as “unraveling,” but that implies he was once fully knitted. Whatever his mental starting point, those seeking the method in Trump’s madness lately have encountered less of the former and more of the latter.

The rage, the Nixonian paranoia and the scattered thinking suggest that he feels walls closing in on him. But his own actions are causing the walls to close … And Trump, even if he thinks impeachment will help him politically, surely doesn’t desire to become only the third president so stained. Yet, each day, his belligerence and refusal to cooperate leave Democrats with less of a choice. He’s stumbling toward impeachment.

“I’m the most transparent president, probably, in the history of this country,” Trump said.

In one sense, that’s true: Trump’s state of mind is utterly transparent, revealed in real time. At the moment, he seems to be transparently mad.

That tweet was the section of the 25th Amendment to the U.S. Constitution that explains how the Vice President can step in to have a president removed from office in case he becomes unfit to serve.

If we had a Vice President whose wife doesn’t keep his balls in a jar under her bedside, he would already have convened the cabinet to invoke the 25th Amendment to remove this madman from office to save the Republic.  But the sycophant Mike Pence is so far up Trump’s ass that he bumped into Sean Hannity. He will not save the Republic.

Um, George, I would suggest that you start the psychoanalysis with your own batshit crazy wife. Kellyanne Conway scrambles after accusing Pelosi of being anti-woman: ‘She treats me like her maid’. She and Trump are peas in a pod, and feeding each other’s mental unwellness.