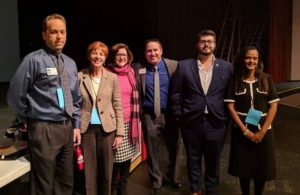 A jubilant crowd of Precinct Committeepersons and County Democratic superstars and candidates attended the Maricopa County Democratic Winter Convention at Central High School in Phoenix on December 8, 2018. Speaker after speaker vowed to work together with everyone in the audience and those who could not attend to continue the trend started in this year’s election of turning Arizona to a blue state. Delegates to the convention also voted for a new Maricopa County Democratic Executive Board to help pave the way to victory in 2020.

Democratic Stars Speak at the Convention

The convention started with some of this year’s electoral winners making appearances to thank the crowd for helping them achieve victory and to excite the delegates about the mission to continue the path to more victories in 2020. These first speakers were Secretary of State-Elect Katie Hobbs, Corporation Commissioner Elect Sandra Kennedy, and Congressional District Nine Elect Greg Stanton. Hobbs said she was “excited to get to work on 2020.” Ms. Kennedy said she “was ready to roll up my sleeves, get ready to work, stop the corruption, and reduce APS rates.” Mr. Stanton commented, “Without you guys, I’m not a Congressman getting ready to fight Donald Trump.” He went on to say how he and the new Democratic House would fight for infrastructure, comprehensive immigration reform, protect people’s health care, ban dark money, restore the voting rights act, stop partisan gerrymandering, and ensure that all presidential candidates show their tax returns when running. Stanton finished by saying to an excited convention floor, “we start today for 2020 to make Arizona blue.” 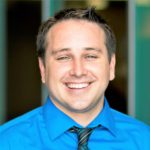 County Party Chair Steve Slugocki then took the stage and recognized the newly elected and re-elected candidates that were in the audience. He also acknowledged the candidates in the audience who did not prevail in November. He saluted the Maricopa County executive staff, including its executive director Miguel Medrano for “making things happen.” He and others asked the audience to recognize and remember those who had helped shape the Maricopa County Democratic Party but had passed on during 2018. These were former Congressman Ed Pastor, former Superintendent of Public Instruction Carolyn Warner and LGBTQ Caucus Leader Ray Bradford. Slugocki and retiring Treasurer Joe Downs then recounted all the electoral and fundraising firsts that had occurred throughout 2018 including:

While giving Donald Trump partial credit for awakening the Democratic Party, Mr. Downs thanked the audience for funding the county party while the DNC, DSCC, and DCCC gave virtually no aid at all.

Other speakers included Congressional Candidate Dr. Hiral Tipireni whose inspiring speech made people wonder if she was considering a run for the special Senate election in 2020.

The two candidates for Phoenix Mayor, former councilmembers Kate Gallego and Daniel Valenzuela, spoke about their candidacies for the March 12 runoff election. Each touted their unique qualifications, experience, electoral performance (Gallego did get the most votes for a mayoral candidate in Phoenix history), and endorsements.

Maricopa County Sheriff Paul Penzone spoke next and discussed the reforms he has undertaken in the post-Arapaio era including more community outreach and the founding of three academies for young people to learn and work in the Sheriff’s office. Ironically, a later speaker, a young lady from LD 19, criticized the Sheriff for not breaking all coordination with I.C.E.

Maricopa County Recorder Adrian Fontes also spoke about how his staff handling of the election helped save 137,000 ballots from being discounted. He may have had the funniest line of the convention as ballots were being tabulated for about twenty-five minutes for one of the board positions when he said: “In my world, it takes two weeks to count ballots.”

Corporate Commission Candidate Kiana Sears, Arizona Democrat Chair Felicia Rotellini, and Treasury Candidate Mark Manoil all took the stage at the end of the convention to thank the delegates for their hard work and support during 2018. Mr. Manoil also took the time to point out that extreme conservative Republicans would fight the $32 fee on auto registrations that were designed to help fund education in the next legislative session by saying it did not pass with a two-thirds vote.

In between the speeches, the Delegates considered nominees for the leadership positions on the Maricopa County Democratic Party Executive Board. After a series of speeches, most of them dynamic and inspiring (especially those of Lynsey Robinson and Redeem Robinson-no relation), the voters, after several hours and the defeat of a motion to make the two nominees for First Vice Chair Co-Chairs, selected a new board to lead the way to the 2020 elections. The winners were:

If past is prologue and if the speeches the new members of the Executive Board gave are any indication of what they can accomplish, Maricopa County, with its new leadership team, may very well become totally blue by 2020 and help lead the way.