The conference will, for the first time in over 20 years of UN negotiations, aim to achieve a legally binding and universal agreement on climate, with the aim of keeping global warming below 2°C.

France will play a leading international role in hosting this seminal conference, and COP21 will be one of the largest international conferences ever held in the country. The conference is expected to attract close to 50,000 participants including 25,000 official delegates from government, intergovernmental organisations, UN agencies, NGOs and civil society.

In advance of the conference, the largest demonstrations of climate change activists ever occurred today. Reuters reports ‘No Planet B’, marchers worldwide tell leaders before U.N. climate summit:

Hundreds of thousands of people from Australia to Paraguay joined the biggest day of climate change activism in history on Sunday, telling world leaders gathering for a summit in Paris there is “No Planet B” in the fight against global warming.

In the French capital, where demonstrations were banned by the authorities after attacks by Islamic State militants killed 130 people on Nov. 13, activists laid out more than 20,000 shoes in the Place de la Republique to symbolize absent marchers on the eve of the summit. 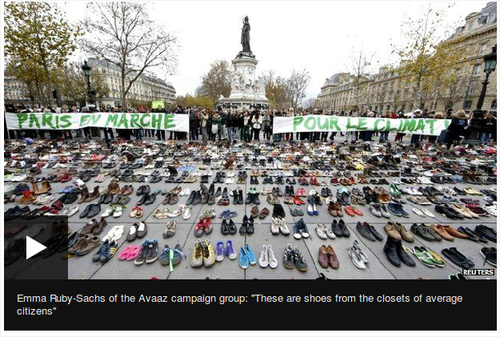 Among the high heels and sandals were a pair of plain black shoes sent by Pope Francis, who has been a vocal advocate for action to prevent dangerous climate change, and jogging shoes from U.N. Secretary-General Ban Ki-moon.

One activist, dressed in white as an angel with large wings, held a sign saying “coal kills.” About 10,000 people joined arms to form a human chain through Paris along the 3-km (2-mile) route of the banned march, organizers said.

PROTESTS AROUND THE WORLD

More than 2,000 events were held in cities including London, Sao Paulo, New York and Asuncion, Paraguay, on the eve of the Paris summit which runs from Nov. 30-Dec. 11 and will be attended by about 150 heads of government.

“Over 570,000 people called with one voice for global leaders to deliver a 100 percent clean energy future at the Paris summit,” said Emma Ruby-Sachs, campaign director of Avaaz, one of the organizers.

Around the world, activists marched, dressed as polar bears or penguins at risk from melting ice, or chanted slogans such as “climate justice”.

Organizers said that 570,000 people so far had taken part in rallies worldwide and that they expected demonstrations including in Ottawa and Mexico City later in the day to push the count above 600,000.

“These are the biggest set of global marches in history,” said Sam Barratt at Avaaz.

There was no independent verification of the numbers, although none of the individual marches rivaled one in New York last year that drew an estimated 310,000 people.

In Sydney, about 45,000 people are estimated to have marched through the central business district toward the Opera House. Protesters held placards reading: “There is no Planet B,” and “Say no to burning national forests for electricity”.

In New York, hundreds of people, many of them holding signs calling for aggressive measures to stop global warming, marched around the perimeter of New York City Hall in lower Manhattan.

U.S. President Barack Obama and China’s Xi Jinping will be among the leaders attending the start of the summit, which organizers hope will produce a legally binding agreement to commit both rich and developing nations to curbing emissions of greenhouse gases, blamed for warming the planet, beyond 2020.

Hopes are high that the Paris summit will not fail like the previous such meeting six years ago in Copenhagen.

Popular and political momentum for tougher action on carbon emissions has accelerated in recent years, with 2015 set to be the warmest on record.

Still, all sides say pledges made in Paris will be insufficient to limit a rise in global temperatures to 2 degrees Celsius (3.6 Fahrenheit) above pre-industrial levels, widely viewed as a threshold for dangerous changes in the planet’s climate system.

It has been heralded as an unprecedented achievement. This year the vast majority of the world’s nations have issued pledges, or “intended nationally determined contributions” (INDCs), promising a range of emissions cuts as a foundation for an agreement at the Paris climate conference that opens Monday.

But there’s a problem. These commitments, on their own, only have the potential to forge a path that would limit warming to 2.7 degrees Celsius above pre-industrial levels at best, according to the U.N. And other assessments have been even more pessimistic than that, producing higher estimates like 3.5 degrees Celsius by 2100.

That’s well above the 2 degrees C that has been dubbed the final marker of a climatic “safe” zone. And now, a group of scientists who study the “cryosphere” — all the ice and snow in the Earth’s system, at the poles but also in frozen permafrost and mountain glaciers — have unleashed a stark assessment of just how inadequate these currently pledged emissions cuts are (barring a major enhancement of ambitions in Paris). Indeed, they say that if the INDCs are the end of the story, often irreversible changes will usher in that, unfolding over vast time periods, will dramatically raise seas and pour dangerous additional amounts of carbon into the atmosphere.

[The Great Thaw: As temperatures rise, the melting of glaciers is accelerating]

“Reacting with ‘too little, too late’ may lock in the gradual but unavoidable transformation of our Earth, its ecosystems and human communities, in a terrible legacy that may last a thousand years or more,” says the document, issued by the International Cryosphere Climate Initiative (ICCI) and reviewed by a number of leading ice scientists focusing on Greenland, Antarctica, permafrost, Arctic sea ice, and more.

As a result, the experts say, many of these regions are now close to (or even in some cases past) major thresholds that, once crossed, we can’t reverse without the arrival of a new ice age. In many cases, in just the past few years the situation has become considerably more dire for key elements of the cryosphere — especially for the ice sheet of West Antarctica, where many scientists think a threshold leading to irreversible loss may have already been crossed.

So if warming really occurs at the level implied by the INDCs — without dramatic additional steps to cut emissions — the report suggests we can look forward to the following: almost total loss of mountain glaciers around the world; major ice loss from West Antarctica and Greenland; a sea ice-free Arctic in the summer; and a major new source of greenhouse gases wafting out of thawing Arctic permafrost. The latter would be particularly damaging because at a time when human-caused emission levels are still far too high, it would require even steeper cuts to fossil fuel use and deforestation than currently contemplated.

[Report: Greenland just opened up a ‘floodgate’ of ice into the ocean.]

Let’s take some of these problem areas in sequence, starting with the planet’s great ice sheets. West Antarctica may already be destabilized at current levels of warming, but the problems don’t stop there. There’s also Greenland, with its 20 feet worth of potential sea level rise in the form of ice. “The best estimate for the viability threshold of the Greenland ice sheet is around 1.6 degrees above pre-industrial,” said Jonathan Bamber, a glaciologist at the University of Bristol in Britain, on a press call to discuss the ICCI report. “If we go above that, the whole ice sheet becomes a relict of the last interglacial, it is no longer viable.”

The concern is not that this would happen all at once or even in this century, but rather, that it would become locked in to occurring. So the researchers are worried that with the current climate ambitions, we could be committing to many meters of long-term sea level rise. And that’s just the beginning of the consequences of melting a lot of planetary ice.

The report also forecasts that with the levels of warming implied by the INDCs, mountain glaciers around the world — which are often a key source of freshwater to communities — will face a severe threat. “We’re on track at the moment to have most of our mountain glaciers cross the threshold beyond which they’re doomed,” said Graham Cogley, a research with Trent University, on the press call.

And then, well, there’s permafrost — frozen soil spread across vast parts of the northern hemisphere Arctic. In a very troubling finding, the report states that even if global average temperatures are held to just 1.5 degrees Celsius — not a target that’s currently on the table — 30 percent of permafrost today could be thawed at least up through the top several meters of soil. And that would translate, by 2100, into about 50 gigatons of carbon emissions — or more than 180 gigatons of carbon dioxide.

Such numbers would severely restrict current emissions budgets that are at the center of current policymaking and, indeed, of assessments of the INDCs. “These carbon losses from thawing permafrost currently are not accounted for in our global climate models, and they need to be accounted for if we are going to hit our emissions targets,” said Susan Natali, a permafrost expert with the Woods Hole Research Center, who reviewed the permafrost section of the report.

To top it all off, the report also forecasts a continual decline of Arctic sea ice that, thanks to feedback processes, will further warm the region encompassing Greenland and many key mountain glaciers — and the large store of the world’s permafrost. For the northern hemisphere, in effect, the loss of Arctic sea ice further weakens the cryosphere across the board.

The upshot is that we could be on the verge, in just a matter of decades, of causing changes that will be irreversible at the scale of thousands of years.

Of course the anti-science, anti-knowledge Tea-Publican climate science deniers in Congress have already sought to undermine any commitments that President Obama may make at the Paris Climate Change Conference, doing the bidding of their masters in the Carbon Monopoly. Senate Votes to Block Obama’s Climate Change Rules (November 17, 2015). Senate Majority Leader Mitch McConnell: Obama doesn’t have the power to sign onto international environment commitments.