Scarborough made the comments about the Kentucky Republican during a segment on “Morning Joe” after McConnell blocked two election security measures. The hashtag #MoscowMitch quickly began trending on Twitter following his comments.

Also on Friday, Dana Milbank of the Washington Post wrote a column entitled Mitch McConnell is a Russian asset.

The man who has spent years building Republican campaigns around demonizing Nancy Pelosi and Barack Obama can dish it out, but he can’t take it. What a snowflake.

It looks like the “Moscow Mitch” taunts actually got under that skin of Senate Majority Leader McConnell.

In a speech described by one observer as “visibly livid,” the Kentucky Republican took to the Senate floor Monday to lash out at his critics. McConnell had come under fire in recent days for blocking a series of election security bills, including a measure passed by the House of Representatives that would provide $600 million for the states to upgrade their voting systems. And yet the majority leader refuses to allow the bills to be brought up for debate.

As both the former Special Counsel Robert Mueller and the Senate Intelligence Committee sounded the alarms last week about the seriousness of the Russian threat to elections, Washington Post columnist Dana Milbank declared McConnell a “Russian asset.”

This doesn’t mean he’s a spy, but neither is it a flip accusation. Russia attacked our country in 2016. It is attacking us today. Its attacks will intensify in 2020. Yet each time we try to raise our defenses to repel the attack, McConnell, the Senate majority leader, blocks us from defending ourselves.

Let’s call this what it is: unpatriotic. The Kentucky Republican is, arguably more than any other American, doing Russian President Vladimir Putin’s bidding.

These accusations and others like them clearly bothered McConnell.

But when he fought back against the criticisms on Monday, his response displayed a laughable amount of hypocrisy. Everything he accused his opponents of, President Donald Trump is guilty of ten times over, yet McConnell offers little pushback to the cyberbully in chief.

Trump’s lying and bullying are plain to see, but he is also a direct descendant of McCarthyism. Trump was close to Roy Cohn, a top ally of Sen. Joe McCarthy during the Republican’s hunt for communists in the U.S. government. To this day, Trump still expresses admiration for Cohn and even repeatedly shared his desire to have an attorney general who would act as “my Roy Cohn.” And it’s Trump, not Democratic critics of Russia’s actual election interference and espionage, who invokes the spirit of McCarthyism as he stirs up baseless attacks on his perceived opponents as “communists.”

To defend against criticism, McConnell claimed that his record shows a history of standing up to Russia. And that may be true, but that makes it all the more baffling why he’s slow-walking election security bills now and refusing to bring up measures for the Senate to actually debate. Given his defense of Trump’s clear desire to work with Russia to win interfere in 2016 and 2020, the Republican Senate majority leader should take the issue much more seriously if he wants to distinguish himself from this conduct.

“Facts matter. Details matter. History matters. And if our nation is losing its ability to debate public policy without screaming about treason, that really matters,” McConnell declared.

But again, if McConnell really wanted to debate the “details” and “facts” of election interference, he could be moving bills through the Senate process. Instead, he’s blocking them.

Milbank detailed the legislation he has blocked without debate:

A bipartisan bill requiring Facebook, Google and other Internet companies to disclose purchasers of political ads, to identify foreign influence.

A bipartisan bill imposing sanctions on any entity that attacks a U.S. election.

A bipartisan bill with severe new sanctions on Russia for its cybercrimes.

McConnell has prevented them all from being considered — over and over again.

Milbank: McConnell himself read from a statement last week, his chin melting into his chest, his trademark thin smile on his lips. “It’s just a highly partisan bill from the same folks who spent two years hyping up a conspiracy theory about President Trump and Russia,” he said. “Therefore, I object.”

A “conspiracy theory,” despite the 17 intelligence agencies unanimously concluding that Russia interfered in the 2016 election on behalf of Donald Trump, confirmed by the investigation of Special Counsel Robert Mueller. McConnell is jeopardizing the national security of the United States to avoid upsetting the madman in the White House — or something worse.

And of course, all this is even more egregious because, as much as Republicans like to blame President Barack Obama for Russia’s 2016 interference — in particular Mitch McConnell — it was McConnell who threatened to undermine the White House if it took aggressive public steps to counter the Kremlin propaganda.

Moreover, if McConnell is truly concerned about overly incautious accusations of “treason,” he should cast a glance toward the Oval Office: [See The 24 times Trump has accused somebody of “treason” (and counting).]

The response to snowflake Mitch’s speech has been swift and harsh. The Hill reports, #MoscowMitchMcTreason trends after McConnell defends blocking election security bills:

The hashtag #MoscowMitchMcTreason began trending on Twitter Tuesday morning after Senate Majority Leader Mitch McConnell (R-Ky.) fired back against the nickname “Moscow Mitch” in a fiery speech from the Senate floor.

McConnell responded on Monday, decrying the attacks against him as “modern-day McCarthyism.”

“I was called unpatriotic, un-American and essentially treasonous by a couple of left-wing pundits on the basis of bold-faced lies. I was accused of aiding and abetting the very man I’ve singled out as an adversary and opposed for nearly 20 years, Vladimir Putin,” McConnell said.

Social media users, however, doubled down on their tweets criticizing the senator. Both the hashtags #MoscowMitchMcTreason and #MoscowMitchUnAmericanTraitor began to trend across the United States.

“The Breakfast Club” radio host Charlamagne tha God wrote that it “feels good” to wake up and see the phrase trending nationally.

“These guys are blatantly openly working with the Russians to keep power and until I saw that trending I thought nobody cared. AMERICA your illegitimate president is a Russian agent. #FightTheFascists,” he wrote on Twitter.

Grant Stern, an author and podcast host for Occupy Democrats, wrote that it was obvious that Scarborough “struck a nerve” when he coined the nickname.

“When the Senate ‘leader’ responded, he proved Joe’s 100 right by spouting the Kremlin line that investigating Putin’s help to Trump is McCarthyism.” 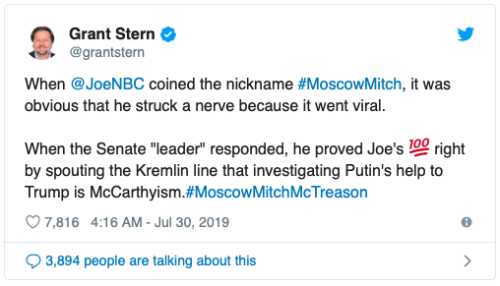 Hundreds of other used the hashtags to mock or criticize McConnell, some even picturing him dressed in Soviet-era uniforms. (Here is one solidly on point). 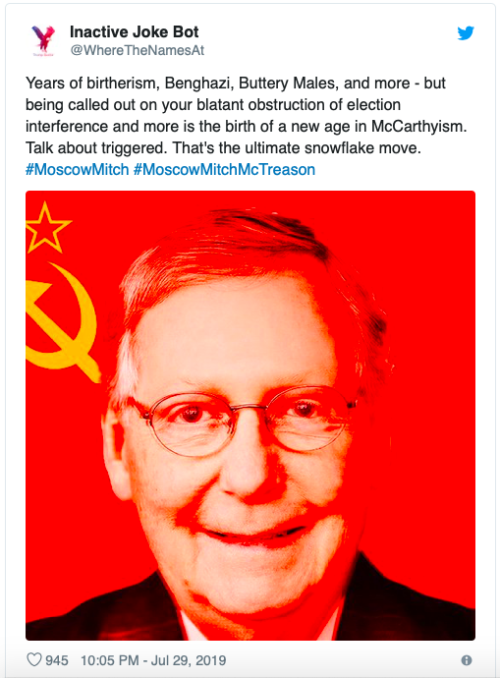 This has the wingnuts all in a lather. It’s OK for them to engage in this kind of behavior — Donald Trump has spent the last two weeks questioning the patriotism of “the squad” of freshman Democratic House members — but these snowflakes can’t take it when they are on the receiving end. Trump makes unfounded claim The Washington Post is a ‘Russian asset’:

Trump was asked by reporters outside the White House to respond to a Post opinion piece published Friday under the headline, “Mitch McConnell is a Russian asset.”

McConnell “is a man who knows less about Russia than even Donald Trump, and I know nothing,” Trump said Tuesday. “If they actually said that, they ought to be ashamed of themselves, and they ought to apologize.”

This is the Sergeant Schultz defense: “I know nothing!” As Robert Mueller would respond, “I would refer you to my report.”

I have been highly critical of this evil GOP bastard Mitch McConnell for years. See, for example, The ‘Enemy of The People,’ Mitch McConnell, is the real radical (excerpt below). McConnell not only needs to be defeated in his senate race next year, but the toxic brand of hyper-partisan politics that he has built and nurtured needs to be destroyed and forever consigned to the ash heap of history.

As Charles Pierce says, There Is No More Loathsome Creature Walking Our Political Landscape Than Mitch McConnell:

He doesn’t have the essential patriotism god gave a snail. He pledges allegiance to his donors, and they get what they want. He’s selling out his country, and he’s doing it in real-time and out in the open. This is worse than McCarthy or McCarran ever were. Mitch McConnell is the the thief of the nation’s soul.

As historian Christopher Browning has written, “If the US has someone whom historians will look back on as the gravedigger of American democracy, it is Mitch McConnell.” The Suffocation of Democracy.

I have said before that Mitch McConnell belongs in the pantheon of the worst senators in U.S. history. He is demonstrably a villain who believes in authoritarianism, as long as his party and he remains in control. No one has abused the rules of the Senate and American democracy more than has Mitch McConnell. History will not remember him kindly, nor should it. His name should be spoken with disdain as we do for those most despised villains in American history.

So you want to talk about “radical,” Mitch? YOU are the real radical and a traitor to the Constitution and your country.

This authoritarian abuser of power is not done with his plan to destroy American democracy. This dinosaur intends to run for reelection in 2020. It should be the sacred pledge of every patriotic loyal American to defeat this evil GOP bastard and remove this stain from the Senate.

ODNI confirms that Republican senators are dupes for Russian propaganda

With Sycophantic Club Members in Attendance, the Mad King lies and...

The eviction crisis and voter suppression