Carolyn Classen posted information in the calendar above about the Arizona Educators United Rally at the Arizona State Capitol scheduled for Noon.

The march this calendar item references is the Arizona Education Association #RedForEd March and Rally (link). 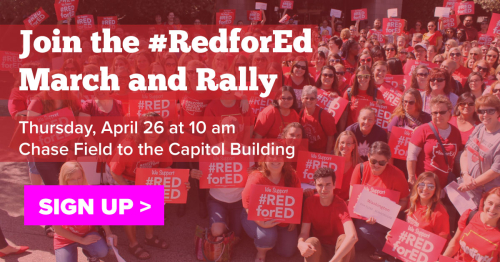 After years of cut after cut to education funding, years of students sitting at broken desks, years of taping textbooks to keep them together, and years crumbling school buildings, we’ve had enough.

On Thursday, Arizona’s educators are walking out for our students.

We’ll be meeting at 10 a.m. at the Chase Stadium and marching to the Capitol Building, where there will be a rally.

The teacher organizations will be joined in solidarity with support from their union brothers and sisters in the Arizona AFL-CIO.

We are witnessing a national uprising in education fueled by students and educators. I believe we in Arizona Labor have a moral obligation to provide no-strings-attached support and help as needed. We will share what information we have for continued support leading up to Thursday (4/26).

Students demand safe schools in which to be educated.

Thousands of educators and their supporters will converge on the State Capitol as they strike to send a loud, clear message to Governor Ducey and Legislative leaders: The time for flimsy, empty promises of change is over.

The teacher walkout is unprecedented in Arizona. It has the potential to be the largest walkout protest in the national teacher revolt movement that first began in West Virginia back in February. Arizona #RedForEd teacher walkout: What we know now:

Why are educators walking out?

Years of quiet frustration among Arizona’s educators over the chronic under-funding of the state’s public schools spurred the state’s historic wave of teacher activism.

The educators supporting the #RedForEd movement had repeatedly voiced frustration over what they believed has been a slow response by state leaders to address the nearly $1 billion in education funding that has been cut since the recession.

These cuts led many Arizona public schools to freeze pay for their educators and withhold making school repairs or buying new supplies such as textbooks.

How severe is Arizona’s teacher crisis?

The Arizona Republic reported that month that schools had already hired a record 1,000-plus people to teach full-time through Emergency Teaching Certificates that require no formal training.

In June, The Republic published a database that found many Arizona schools filled classroom positions in 2016-17 with under-qualified or inexperienced teachers.

What are educators’ demands?

How much will it cost to fulfill the demands?

Funding all of the demands laid out by Arizona Educators United would likely cost the state billions of dollars.

Legislative budget analysts have estimated a pay raise for teachers would cost about $29 million per percentage point, bringing a 20 percent raise to about $580 million.

Restoring funding to 2008 levels would require adding about $1 billion more in state funding to education. Arizona spends $924 less per student in inflation-adjusted dollars today than it did in 2008, according to the Joint Legislative Budget Committee.

Such a steep price tag would likely require raising taxes, putting educators at odds with Gov. Doug Ducey and some Republican lawmakers who control the Legislature, as both have said publicly that they will not raise taxes.

How has Ducey responded to the movement?

For weeks, the governor said little publicly about the #RedForEd movement as educators and their supporters peacefully protested and threatened to take action.

He also continued to stick to his January budget proposal, which would’ve provided $100 million in new capital funding and the second half of a promised 2 percent teacher pay stipend.

In an April 12 radio interview, the governor referred to the movement as a “political circus.” Later that week, he announced a proposal to give the state’s teachers 20 percent pay raises by 2020.

Ducey promised swift movement, but the proposal has now sat for more than a week with no formal budget introduction.

Has Ducey met with educators?

Ducey has not met with Arizona Educators United or Arizona Education Association organizers, both of which have requested to negotiate directly with the governor.

Ducey, however, met with a group of 13 classroom teachers days before educators announced a walkout date to discuss his so-called #20by2020 proposal.

How did teachers decide to walk out?

Of those who voted statewide, 78 percent supported a walkout, organizers said.

That support appeared to give organizers the confidence and “mandate” to set a walkout date. The Thursday walkout comes nearly a month after organizers first threatened to strike if state leaders didn’t address their demands.

Do all educators support a walkout?

No. Some have expressed concerns about walking out and are worried it could negatively affect their students or impact the wave of public support educators have so far seen.

Joe Thomas, president of the Arizona Education Association, said some school sites voted against walking out, but the votes at those schools were close.

Thomas did not offer further specifics on the voting percentages by district or school site when asked Friday.

Teachers and support staff aren’t required to participate in the walkout. They will decide individually whether to walk out or go to work Thursday.

How are schools preparing?

Schools have been preparing for the possibility of a walkout for weeks. Most, if not all, have begun dispatching notices to parents and community members about their plans for the walkout.

School officials have urged parents and guardians to be on alert for robocalls, emails, Facebook posts or letters notifying them of their schools’ latest updates.

Many schools have sent notices to parents about their walkout response plans, from whether they’ll be open to how a closure would affect school breakfast and lunch programs, testing and graduation schedules.

Many schools have urged parents in their alerts to make sure their contact information is up to date.

How many schools will participate?

The footprint of a statewide walkout remains unclear.

Arizona Educators United has more than 1,000 “site liaisons,” who’ve volunteered to coordinate the movement’s efforts. This includes liaisons at about 60 of the state’s 550 charter schools, according to internal documentation.

The same documentation showed that while the #RedForEd movement is well-represented in the state’s largest metro areas and outlying counties, there remain rural pockets that don’t appear to have a presence in the movement.

Most of these districts are small and have only one or two school sites.

Here in Tucson, Tucson’s nine major districts will close all their campuses Thursday:

Tucson’s nine major districts will close all their campuses Thursday, leaving roughly 116,000 students without a school to attend.

Amphitheater, Flowing Wells, Marana, Sunnyside and Tucson Unified have plans to provide free and reduced-cost breakfast and lunch for students.

[I]t’s “very likely” schools will close Friday as well, though that will depend on whether teachers decide to come back.

With no clear end in sight, school administrators are taking the walkout day by day. Several school district said they have enough time built into their calendars to weather a two-day walkout without extending their school years.

While few superintendents have commented on the movement publicly, many appear to be sympathetic to the educators’ activism movement.

However a few, including in Kyrene Elementary School District and Queen Creek Unified School District, have sent letters to parents criticizing walkout plans.

Arizona is a right-to-work state, meaning educators have little to no job protections. The support from superintendents and school boards will play a critical role in determining how long a walkout could last.

Right-to-work is frequently misunderstood. Most employees in Arizona are employed “at will,” a common law theory that one can be terminated at any time for any reason (that does not violate a law, like the Arizona Civil Rights Act). This is the legal reason why most Arizonans have no job protections.

Employees with a contract of employment however, as most teachers have,  are entitled to additional personnel procedures and job protections, either in their contract of employment or under contract law. See Arizona’s Employment Protection Act, A.R.S. § 23-1501. Public employees also have a property interest in their jobs, i.e., Loudermill Rights: a public employee cannot be dismissed without the due process of notice and pre-termination hearing.

“Right to work” simply means that you cannot be required to join a union as a condition of employment (“closed shop” union security agreements). See Arizona Constitution, Article XXV (by initiative, Proposition 4 in 1948).

An Arizona Public Employee Strikes Ban Amendment, also known as Proposition 102, was on the 1984 election ballot in Arizona as a legislatively referred constitutional amendment. It was defeated.

So Is an Arizona teacher walk out against the law?

What is the current law in Arizona for teacher strikes?

Currently, there is no Arizona statute that prohibits teacher strikes or walk outs.

The Arizona Attorney opined that such strikes were prohibited under common law because the public employees are an agent of the state and, therefore, as a state actor have no right to strike or to interfere with the state’s government functions.

Ultimately, the Attorney General appeared to find that the strike constituted a job resignation without Board approval and therefore fell within conduct constituting “unprofessional acts” warranting disciplinary action.

A school district might, for example, deem participation in a walkout as an abandonment of the teaching contract; essentially, a resignation.

Under Arizona statute, resignation without receiving Board approval is considered an “unprofessional act” subject to disciplinary action, including suspension or revocation of the teacher’s teaching certificate.

A school district might simply deem a day missed during the walkout as an absence that does not violate Arizona law or breach the parties’ contract.

The First Amendment’s freedom of association and free speech rights will guide whether a district may confidently take disciplinary action against a teacher participating in a walkout. However, First Amendment rights are not unlimited and do not allow a teacher to materially disrupt the educational interest of the school district.

Because Arizona and federal law grant a public school teacher certain property interests in the right to continued employment, the district must afford a tenured teacher due process rights, including the right to a hearing prior to dismissal (see above). I suspect that the length of time of a walkout, the teacher’s motivation and conduct during the walkout, as well as the level of the district’s support before and during the walkout would be closely examined during any resulting termination hearing.

Could the strike violate teacher contracts?

Whether a teacher walkout violates any particular teacher contract must be ascertained from the “four corners” of the contract itself. If a district were to deem participation in a walkout as a resignation or job abandonment, then a court will examine the intent of the parties. For example, was walking out the teacher’s manifestation of an intent not to comply with the current contract for the remainder of the school year, giving the district a reasonable basis for declaring a resignation or abandonment?

The above is a general discussion of Arizona employment and labor law and is not intended as legal advice to any individual or organization. If you have a question or concern, please contact your lawyer.