A Democrat defeating our crypto-fascist wannabe dictator Donald Trump is absolutely essential to America’s future. If Trump is reelected he will likely appoint two, perhaps three more justices to the U.S. Supreme Court (the oldest members of the court: Ruth Bader Ginsburg is almost 87, Stephen Breyer is 81, and Clarence Thomas is 71) from the right-wing reactionary Federalist Society that will control the court for a generation. It will be a court which does not reflect our increasingly diverse society, and which will reject the court’s progressive opinions of the 20th Century and the progressive policies favored by our younger generations today. It is not hyperbole to say that “failure is not an option.”

Now that I’ve got your attention, the second half of the Supreme Court’s current term will be chock-full of high-profile arguments and blockbuster opinions, and court watchers say it’s going to be “tense.”

In the coming months, the justices will consider whether President Donald Trump can avoid congressional inquiries into his financial history. They’ll also get their first chance to chip away at abortion rights since Trump’s conservative nominees took the bench. The court has already heard divisive cases involving gun rights and the administration’s plans to nix deferred deportation for “Dreamers,” but has yet to issue its final opinions.

But with so many blockbuster cases, other consequential ones are flying under the radar, said Baker Botts’ Scott Keller. Cases on discrimination, religious liberty, and administrative law could show the trajectory of the Roberts Court, Keller said. And they could show whether the newly constituted conservative majority will take the court sharply to the right, or whether Chief Justice John Roberts will temper that majority with his swing vote.

June—when the high court wraps up its nine-month term—is potentially going to be explosive, only weeks before the Democratic National Convention in July. 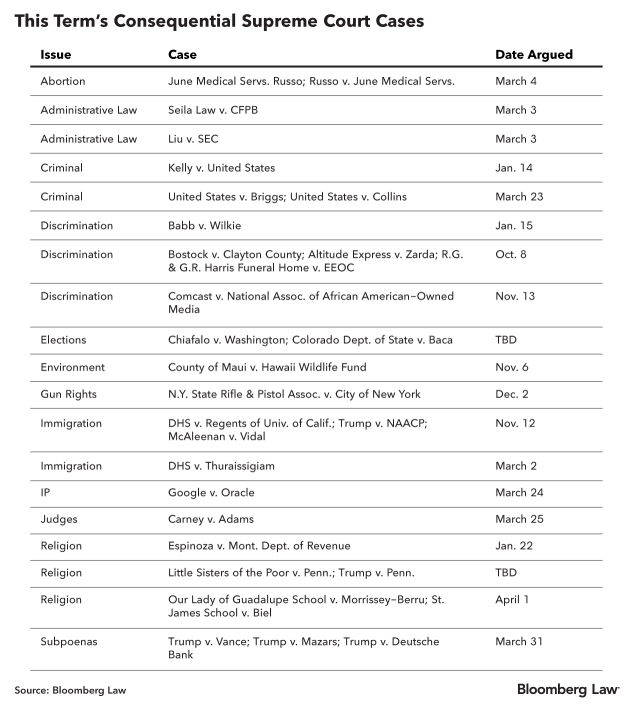 All eyes will be on the Supreme Court in March when it will hear a challenge to a Louisiana abortion law and the battle over the president’s financial records.

Up first on March 4 is June Medical Services v. Russo, the current court’s first abortion-related case, which could reverse a 2016 decision and begin chipping away at abortion protections. The Louisiana law requires abortion doctors to get admitting privileges at nearby hospitals. A 5-3 Supreme Court, with now-retired Justice Anthony Kennedy in the majority, struck down a functionally identical Texas law in 2016.

Although touted as a measure meant to make abortions safer, “there was no significant health-related problem that the new law helped to cure,” the Supreme Court said in Whole Woman’s Health v. Hellerstedt. Instead, the law merely made it more difficult to obtain an abortion and was therefore an undue burden, the court said.

How the newly reconstituted court will deal with precedent has been a growing concern among the court’s dwindling liberal bloc. The court’s decision last term to overturn a 40-year-old precedent allowing states to sue other states in their own courts led Justice Stephen Breyer to “wonder which cases the Court will overrule next.”

The Louisiana abortion case is is an early test for Chief Justice John Roberts, who was in dissent in Whole Woman’s Health, but who may be concerned that ignoring that precedent could inflame perceptions the court has become a political body.

At the end of the month, the justices will hear three cases concerning access to Trump’s financial records—another political minefield for the Roberts Court.

In Trump v. Mazars and Trump v. Deutsche Bank, the justices will consider whether Congress can compel banks to turn over the president’s records. In Trump v. Vance, it’s New York that’s trying to get the documents.

Roberts has studiously avoided getting into the middle of political fights, even during the recent impeachment trial of Trump. But with a ruling expected by the end of the term, the cases are likely to put the Supreme Court in the middle of the divisive saga just as the 2020 presidential election season gets into full swing.

The justices will also decide cases that could change the landscape of federal protections from workplace discrimination.

Earlier this term they heard a trio of closely-watched cases on the scope of federal employment discrimination laws. Whether the court will say that those laws protect LGBT workers, or that such discrimination falls outside of federal protections seemed too close to call.

In Comcast Corp. v. National Association of African American-Owned Media, the justices will decide whether plaintiffs must allege that race was the only factor behind an adverse employment decision to sue under federal anti-discrimination laws, or whether they can merely allege that it was just one factor.

The same question is at issue in Babb v. Wilkie, but for age discrimination instead of race.

Religion on Many Fronts

The religion cases on this term’s docket have the potential to change the church-state landscape on several different fronts.

In January, the justices heard arguments in Espinoza v. Montana Department of Revenue dealing with public funding of religious schools.

In April, the court will hear Our Lady of Guadalupe School v. Morrissey-Berru and St. James School v. Biel, asking if courts should refuse to entertain discrimination suits against religious employers to avoid becoming embroiled in religious affairs.

And later in the month, the justices will once again consider religious exemptions from the Affordable Care Act’s requirements that employers provide contraceptive coverage for their employees. It’s an issue the justices addressed in 2014 in Burwell v. Hobby Lobby, but now the Trump administration wants to expand the exemption that emerged from that litigation.

Finally, the court has a number of cases touching on administrative law that could reshape the way agencies operate.

Conservatives in general, and Trump’s high court nominees in particular, have had their eyes on this area of the law as a way to rein in what they see as an unruly administrative state.

The case garnering the most attention is Seila Law v. CFPB, which the justices are scheduled to hear March 3. At issue is whether the watchdog’s single-director leadership structure unconstitutionally curtails the president’s power over the executive branch.

But the court’s decision in the Dreamer case, as well as an SEC suit taking aim at the Consumer Financial Protection Bureau (CFPB) ability to claw back ill-gotten gains, could have broad ramifications in the realm of immigration and securities regulation.

The court is also hearing what could be the most consequential copyright case in a generation in Google v. Oracle. With so many other blockbusters on the court’s plate, barely anyone is talking about it, Keller said.

Hopefully you will be talking about it now to inform your decision in whom to vote for in the Democratic presidential primary.