One would never know that currently the U.S. has a coronavirus pandemic spreading unchecked because the government has given up trying to stop it, an economy on the verge of collapse into a depression, and hundreds of thousands, if not millions of Americans marching in the streets for racial justice.

This is not what Republicans in the Senate are concerned about. Lost in the news last week was this “deflect, distract, destroy” strategy from the Benghazi! Brigade of Republican conspiracy theorists in tinfoil hats: the Stalinist show trials of Trump’s political “enemies list” is on. Senate Republicans authorize subpoenas in probe targeting Trump enemies:

Senate Republicans are ramping up their investigations into President Donald Trump’s political foes.

In a party-line vote Thursday, the Senate Judiciary Committee authorized Chairman Lindsey “Stonewall” Graham (R-S.C.) to issue a broad range of subpoenas to a slew of former Obama administration officials who opened or were involved in the counterintelligence investigation into possible ties between the Trump campaign and the Russian government. 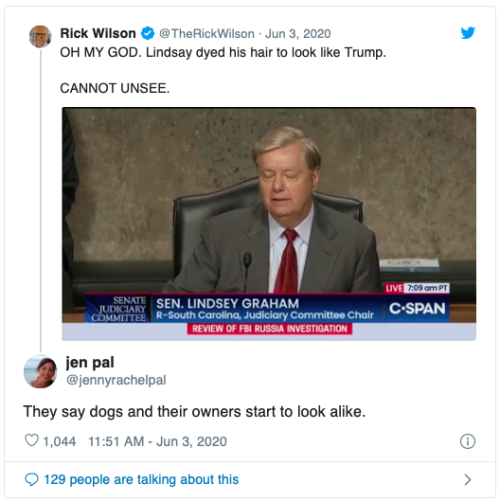 It’s part of a GOP-led investigation into the genesis of the Russia probe and former special counsel Robert Mueller’s appointment — a probe that President Donald Trump has long sought, particularly as he seeks retribution after his acquittal in the Senate’s impeachment trial.

The subpoenas target former FBI Director James Comey, former CIA Director John Brennan, and former Director of National Intelligence James Clapper, among others. Graham has said he plans to seek testimony from Mueller himself, “or an appropriate designee.” 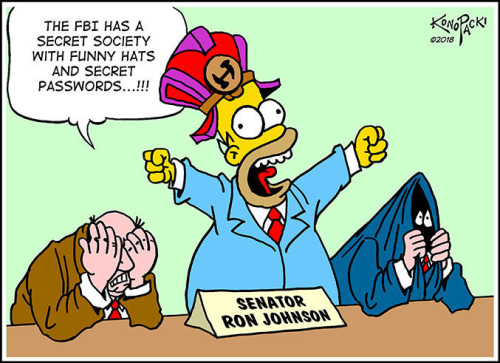 Sen. Johnson’s home state newspaper the Madison Capitol Times accurately described him in 2018, Editorial: Ron Johnson a liar, or a fool, or both? (Not a trick question, the correct answer is “both”).

During the 2016 campaign, Johnson’s Trump worship simply made the senator sound dopey. But since Trump has assumed the presidency, the senator has begun to sound delusional.

Johnson is not just a Trump “yes man.” He is a Trump propagandist. And so it probably should not have come as that much of a surprise when the senator got caught last week peddling a conspiracy theory about a “secret society” of rogue FBI agents trying to undermine the president.

The senator’s comeuppance inspired a question: Is Ron Johnson a liar, or a fool, or both?

Whatever the answer, one thing is now entirely certain: Ron Johnson is not serving as Wisconsin’s senator. He is serving as Donald Trump’s errand boy. And he is doing a lousy job of it.

Johnson has embarrassed himself.

Johnson has embarrassed the state he is supposed to represent.

Johnson has embarrassed the Senate by making assertions that simply are not true — and then by refusing to acknowledge that what he is saying is false, even when the evidence of the falsehood is on full display.

It is obvious that Ron Johnson is the worst senator from Wisconsin since Joe McCarthy.

To be fair, Johnson is neither as intellectually adept nor as cunning as McCarthy. But, as with McCarthy, Johnson has gotten caught making outlandish claims about high-level conspiracies that by all evidence do not exist.

Democrats have charged that the investigations are baseless and intended to boost Trump’s re-election prospects. Republicans reject that charge, alleging that the president and his associates were unfairly targeted by the outgoing Obama administration.

It is important to emphasize that Republican claims are directly contradicted by the Mueller Report findings, and by Inspector General Horowitz, and by the Senate Intelligence Committee.

Just like the eight Benghazi! congressional investigations which produced nothing, the purpose is to create an echo chamber in the conservative media which the mainstream media will then feel obligated to report, and to create an air of suspicion with which to smear Joe Biden and Trump’s political enemies list.

Rep. Kevin McCarthy, now House Minority Leader, admitted in 2015 that the Benghazi! investigations were simply a vehicle by which to smear Hillary Clinton.

Here’s what he said, via Roll Call:

What you’re going to see is a conservative speaker, that takes a conservative Congress, that puts a strategy to fight and win. And let me give you one example. Everybody thought Hillary Clinton was unbeatable, right?

But we put together a Benghazi special committee. A select committee. What are her numbers today? Her numbers are dropping. Why? Because she’s untrustable. But no one would have known that any of that had happened had we not fought to make that happen.

The GOP is going back to the well again one more time.

Rosenstein defended his decision to appoint Mueller as special counsel and largely blamed the FBI for the inaccuracies and omissions in the surveillance applications, including one that Rosenstein himself approved.

American justice is in crisis: Civil rights demonstrators fill the streets, most Americans say law enforcement is discriminatory, and, in front of the White House, the attorney general orders federal police to trample the constitutional rights of peaceful demonstrators.

This would be a good time for the august members of the Senate Judiciary Committee to protect the Constitution they swore to uphold.

Instead, committee Chairman Lindsey Graham (R-S.C.) convened his panel this week to launch yet another investigation into the Obama administration.

Graham made perfectly clear his motive: vengeance. “Comey and McCabe and that whole crowd — their day is coming,” he vowed at the hearing Thursday. He declared Robert Mueller “off script” and he proposed alternatives for Russia-probe investigators: Either people “need to be fired, they need to be disciplined,” or “they are good candidates to go to jail.”

“Somebody needs to be held accountable,” he decreed. In fact, getting to the bottom of the FBI’s actions four years ago is what Graham called his “promise [to] the American people.”

That very day, markets plunged 6 percent after the Federal Reserve said millions have lost jobs permanently. While the pandemic resurges and racial unrest roils the country, Trump speaks up for Confederate symbolism and floats bizarre conspiracy theories. The defense secretary and the chairman of the Joint Chiefs of Staff disavow the White House’s crackdown on the First Amendment.

But by all means, let’s talk about Hillary’s emails.

“The committee has never received any emails from the Democratic National Committee or Clinton campaign even though we repeatedly asked for them,” Sen. Chuck Grassley (R-Iowa) complained at Thursday’s session. He then traveled memory lane, from Fusion GPS to the Steele dossier, to alleged “Russian collusion” by the Clinton campaign. “What did Hillary Clinton know about the dossier and when did she know it?” Grassley demanded.

Let’s do the time warp again.

Graham is so singularly focused on delivering for Trump that he blocked Democrats from adding to the subpoena list past or current Trump advisers Michael Flynn, Michael Cohen, Jared Kushner, Paul Manafort, Rudy Giuliani, Roger Stone and anybody else whose testimony might shift the focus from Obama. Republicans even shot down a request for the unredacted Mueller report.

The committee will hold a hearing next week about “Police Use of Force and Community Relations” without specific legislation (South Carolina’s Tim Scott, the Senate’s lone black Republican, is working on that). Graham brushed off Democrats’ request to have Barr at that hearing, saying Barr “will come before this committee” at an unspecified time.

Sens. Kamala Harris (D-Calif.) and Cory Booker (D-N.J.) tried to amend Graham’s authorization to say the subpoenas must wait “until the committee has conducted a hearing to investigate the conduct of Attorney General Barr.”

Sen. Dick Durbin (D-Ill.) requested an amendment condemning Barr “for ordering federal officers to use gas and rubber bullets against the people of the United States who were peaceably protesting in Lafayette Square.”

Democrats howled. “Never has a chairman devoted the full weight of the committee’s resources to pursue a partisan investigation after being prompted by a presidential campaign,” protested Sen. Pat Leahy (Vt.).

“For the past two weeks, this committee has devoted countless hours to chase after a conspiracy theory,” said Sen. Mazie Hirono (Hawaii).

But Graham had none of it, delivering a jeremiad about Mueller, Christopher Steele and the dossier. “You are trying to stop me from doing something I think the country needs to do, and I’m not going to be stopped,” he said. “It appears that you want to talk about everything except what we should be talking about.”

Right. A deadly pandemic, an economic collapse and a crisis of American justice. But what “the country needs” is to hear from Lisa Page and Peter Strzok.

Well, take this, you moral reprobate. Lindsey Graham praises Joe Biden in what might be ‘the best campaign ad ever,’ according to former Bush aide:

According to the 2015 version of Sen. Lindsey Graham, Donald Trump is “a race baiting, xenophobic religious bigot,” while Joe Biden is “as good a man as God ever created.”

Obviously, Graham’s public-facing stance has shifted dramatically over the years, but those words were given new life in what Harvard economics professor Greg Mankiw hailed in a blog post on Saturday as “perhaps the greatest campaign ad ever.”

Here’s the ad, which has been viewed almost a million times over the weekend:

The ad was launched by the coalition Republican Voters Against Trump and started with footage of Graham railing against Trump on CNN in 2015. It then showed Graham praising Biden in an interview that same year with the Huffington Post.

The group said the ad is set to run on Fox News in several cities across the country.