On December 30, 2019 the Census Bureau released its newest population estimates for every state, detailing how many residents each state has gained or lost since the last census, in 2010.

The Census Bureau provides the next Important Dates to come in the 2020 Census:

Counting every person living in the United States is a massive undertaking, and efforts begin years in advance. Here’s a look at some of the key dates along the way:

The AP reports, There’s a lot of money at stake in this year’s census. How will your town fare? (excerpts):

Obtaining an accurate count is critical because the census determines the allocation of $1.5 trillion in federal spending and decides which states gain or lose congressional seats.

“There is nothing more important, no higher priority, than reaching the hard to count,” Census Bureau Director Steven Dillingham told lawmakers last summer.

Arizona is among the states with a low response rate. This costs us all federal allocation of dollars. For the first time, the Census Bureau would like respondents to answer questions online.

The agency estimates that roughly 15% of households lack regular connection to the internet nationwide (but ranges much higher in some locations).

The Census Bureau sends workers to homes that don’t respond. Diana Elliott, an Urban Institute researcher co-wrote a report last summer that estimated anywhere from 900,000 to 4 million people could be missed.

Researchers have learned that Latinos, African Americans, non-English-speaking immigrants and children under 5 are the hardest to count, along with tribal members, nontraditional families and people with informal living arrangements.

Experts say the Trump administration’s effort to put a citizenship question on the questionnaire may scare off immigrants who live here illegally and others. Although the effort failed, opponents of the question say damage has already been done.

California and New Mexico have some of the nation’s largest concentrations of Latinos. In those states, over 40 percent of the population lives in hard-to-count neighborhoods.

By contrast, Vermont, Maine and West Virginia have some of the highest concentrations of white residents and older people, who are more likely to fill out census forms. There, less than 5% of the population lives in hard-to-count neighborhoods.

To tout the importance of the 2020 census, California is spending an estimated $187 million on advertising and events and recruiting neighborhood leaders to encourage participation. California census officials have hired liaisons whose sole focus is 15 specific hard-to-count groups, including farm workers, the homeless and people without broadband subscriptions.

“You really have to understand the structural barriers that exist,” said Ditas Katague, director of the California Complete Count-Census 2020 Office.

Arizona gears up for the 2020 Census:

“All Arizonans should be counted in the upcoming census,” said Ducey in a statement. “The Arizona Complete Count Committee will help ensure we are reaching out to every neighborhood and community across the state—rural and urban—with a keen focus on historically undercounted populations. My thanks to all members of the committee for dedicating their time to this important effort. I look forward to partnering together in the weeks and months ahead to ensure as full and accurate a count as possible.”

“We are Arizona and we will work with these other committees to just make sure that they have any support that they need. We want to make sure that between all our various committees, we’re reaching every piece of the population in Arizona through communication to let them know what the census is, how they reply, how important it is that they reply and what that all means for Arizona,” Debbie Johnson, CCC chair and Arizona Office of Tourism director, said.

A local organization that has already launched a Census 2020 initiative is the Maricopa Association Governments with its iCount 2020 outreach campaign.

The campaign will be focusing on media platforms like television, radio, digital video, mobile, bus wraps, billboards, print and search investments to spread the message across multiple platforms. All ads will be in English and Spanish.

“These messages will continue to develop as we get closer to census day to commitment and participation, and finally to outcomes and performance,” Chandler City Manager Marsha Reed, who also co-chairs the MAG Regional Census Communication Group, said in a statement. “People can also opt in to receive text or email messages.”

The City of Phoenix recently launched its own public-private partnership that will support the iCount 2020 initiative.

On Sept. 12, Phoenix Mayor Kate Gallego announced that the city had partnered with Cisco and Microsoft to power 2020 Census Outreach Vehicles with state-of-the-art technology.

“This public-private partnership with Cisco and Microsoft is the first known census partnership nationwide aimed at bridging the potential of a digital divide in anticipation of the nation’s first-ever online census,” said Gallego.

According to the city, the vans will visit Phoenix’s most undercounted neighborhoods to engage individuals with census information through June 2020.

The Pima Association of Governments has released a census toolkit online.

“There are so many local committees that are doing such fantastic work that the state committee just wants to be supportive of them and look at any gaps that exist in those local committees,” Johnson said. “We’ll fill in those gaps and then just be as supportive as they need us to be from the state level.”

The Census is not just about the fair allocation of federal dollars. It is also the basis for the allocation of congressional seats in Congress.

We’ve used [the new Census] figures, along with estimates from previous years, to project how many seats in Congress each state is likely to gain or lose after next year’s census, when the Constitution mandates that all 435 House seats be reallocated according to each state’s share of the total U.S. population.

Note: The House passed the Permanent Apportionment Act of 1929, fixing the number of Representatives at 435. Signed into law on June 18, 1929, the Permanent Apportionment Act capped House Membership at the level established after the 1910 Census and created a procedure for automatically reapportioning House seats after every decennial census. The U.S. Population on April 15, 1910 was estimated to be 92,228,496. Over a century later, the U.S. population has more than tripled, to over 328 million estimated population. After over a century of exponential population growth, maybe now is the time to start thinking about expanding the size of the House. I’m just sayin’. Food for thought. 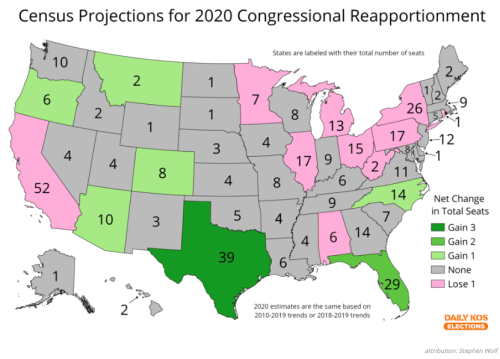 These projections also represent a shift, in some cases, from those that the firm Election Data Services issued a year ago, when the Census Bureau last updated its population estimates.

If California does indeed lose a seat, it would be the first time in 160 years that the Golden State’s representation in the House shrank.

The 2020 census and subsequent reapportionment will thus set the stage for congressional redistricting. However, it’s difficult to predict with much accuracy what the partisan impact of these changes will be because we don’t yet know which party (if any) will control the redistricting process in many states. If redistricting had taken place after the 2019 elections, Republicans would have been able draw two to three times more congressional districts than Democrats. However, elections next year for governors, state legislatures, and redistricting reform measures will be crucial for setting the partisan landscape.

Interestingly, the largely Midwestern and Northeastern states that are projected to lose seats almost all trended Republican in 2016, while the states forecast to gain seats—largely in the Sun Belt—almost all trended Democratic. These trends could benefit Democrats in the long term if they can start winning regularly in places such as Arizona, Florida, North Carolina, and Texas, even if Republicans shift toward a greater reliance on carrying the Rust Belt.

This is why winning at least one chamber of the Arizona legislature and the majority of congressional seats is critical for Democrats in 2020.  We don’t want a replay of the heavy-handed GOP authoritarianism we saw from Governor Jan Brewer and her minions after the 2010 Census, which backfired spectacularly in a series of court defeats for Republicans that established new precedents strengthening the Arizona Independent Redistricting Commission.

UPDATE: For a good summary of the GOP’s REDMAP (Redistricting Majority Project) gerrymandering scheme after the 2010 Census, see David Daley’s piece at Salon, The decade Republicans hijacked our democracy, via the gerrymander. It is a tyranny of the minority by Republicans:

Here’s the thing: When you’re trying to ensure that the side with less support continues to hold power, when you’re trying to maintain control without talking to a changing nation, your tactics aren’t likely to end with redistricting. Indeed, efforts to make it harder for citizens to vote were among the very first actions by gerrymandered state legislatures, especially in Wisconsin and North Carolina, where a federal court found that those barriers were “surgically” crafted to target blacks. Gerrymandered legislatures can take such anti-democratic actions because the people’s representatives need not fear the judgement of the people. And after the U.S. Supreme Court undid essential protections within the Voting Rights Act, in the 2013 case Shelby County v. Holder, states and other entities didn’t have to fear the courts, either, when they wanted to change the rules around voting. Across much of the nation, but especially in the South, as well as in states with one-party control and newly gerrymandered legislatures, came a flood of voter ID bills, cutbacks in absentee and early voting, voter roll purges, precinct closures and more.

Arizona Republicans are not done yet. They have a package of GOP voter suppression bills ready to go in 2020.

Arizona Voters have more to consider in 2020 than just the...