Evil GOP bastard and “The Enemy of The People,” Senate Majority Leader Mitch McConnell, is holding the CASH Act hostage ($2,000 COVID relief payments to Americans), tying a vote on the bill to two poison pills from Trump’s temper tantrum demands last week over the COVID relief bill and the omnibus appropriations bill, before Trump signed those bills and gave up any leverage.

The Kentucky Republican, shortly before adjourning the Senate on Tuesday afternoon, introduced a bill that would combine increased direct payments with a repeal of the online liability protections known as Section 230 and the establishment of a commission to study voter fraud. The latter two issues have been significant drivers of Trump’s ire in the wake of his general election loss — the latter of which with zero evidence presented to this point.

While the move doesn’t guarantee McConnell will bring the bill up for a vote, it provides a substantive option should time — and the political winds — press the chamber in that direction. It’s also one that would be all but certain to fail to garner the votes for passage.

Senate Democratic leader Chuck Schumer of New York called the bill a “cynical gambit” and said it would serve as “a blatant attempt” to ensure the $2,000 direct payments were not signed into law.

And McConnell gains the false talking point that Democrats killed the $2,000 relief payments by voting against his poison pills bill, when in reality it is one man, Sen. Mitch McConnell, who is diabolically killing the $2,000 payments with his evil machinations.

But McConnell’s move was crucial for several reasons in the final chaotic days of the 116th Congress.

With two politically endangered GOP senators just days away from runoff elections — Kelly Loeffler and David Perdue of Georgia — announcing their support for Trump’s push for $2,000 checks, McConnell has found himself in a position he spends the vast majority of his time as Republican leader trying to avoid: Navigating a divided conference. Republican Sens. Marco Rubio of Florida and Josh Hawley of Missouri are also behind the push to expand the payments, with Hawley playing a central role in pushing the issue to the forefront.

In addition, Trump Claims Republicans Opposed to $2,000 Checks ‘Have a Death Wish’:

President Trump again called for the Senate to approve $2,000 stimulus checks for most Americans, saying Republicans against the measure had a “death wish.”

“Unless Republicans have a death wish, and it is also the right thing to do, they must approve the $2000 payments ASAP,” Trump wrote on Twitter. “$600 IS NOT ENOUGH!”

Unless Republicans have a death wish, and it is also the right thing to do, they must approve the $2000 payments ASAP. $600 IS NOT ENOUGH! Also, get rid of Section 230 – Don’t let Big Tech steal our Country, and don’t let the Democrats steal the Presidential Election. Get tough! https://t.co/GMotstu7OI

What you see here is Trump trying to gain favor with Americans by demanding $2,000 COVID relief payments, something he and Republicans opposed for months, and his own Treasury Secretary negotiated the measly $600 payment. Trump actually doesn’t give a damn whether Americans ever receive a $2,000 relief payment.

What Trump really wants is what Sen. Mitch McConnell, his lickspittle lackey has given him, poison pills for a repeal of the online liability protections known as Section 230 and the establishment of a commission to study voter fraud. Trump and McConnell are simpatico on McConnell’s cynical poison pills bill.

Trump wants to perpetuate the GOP myth of voter fraud. Remember that he appointed a voter fraud commission after the 2016 election. The commission disbanded in 2018 after finding no evidence of widespread voter fraud as Trump had falsely claimed. Despite numerous lawsuits filed after the 2020 election, the Trump campaign has lost all but one lawsuit (involving a minor deadline) and did not even allege voter fraud in most of these lawsuits. Democratic election law attorney Marc E. Elias has been keeping count of these cases.

We still have 2 days left in the 2019-20 cycle and we are not done winning!🥳 pic.twitter.com/VebbcePyoX

[Senate Republicans who favor the $2,000 payment are] hardly a majority, however, aides say. A significant number of Senate Republicans have problems with the House-passed measure to increase the direct payments.

Sen. Patrick Toomey, a Pennsylvania Republican, called the direct payments, given their size and scope, “not sound economic policy.”

Sen. John Cornyn, a Texas Republican and ally of McConnell’s, said he was opposed to the standalone direct payments increase and said given the amount Congress has appropriated in Covid relief up to this point, more focus should be placed on those efforts.

“This is just opportunistic on the part of the House,” Cornyn said of House Democrats. “They’ve got an issue and unfortunately it seems to be drowning out all the other good stuff we’ve done.”

By tying all of Trump’s demands together, particularly with policies Democrats are almost sure to oppose, McConnell gives himself an option that, should he bring it to the floor, would give Republicans something to vote for with little risk it could become law.

Mitch McConnell’s “do nothing” Republican Senate. A “show vote” that doesn’t accomplish anything is a Mitch McConnell specialty. As I said, McConnell gains the false talking point that Democrats killed the $2,000 relief payments by voting against his poison pills bill, when in reality it is one man, Sen. Mitch McConnell, who is diabolically killing the $2,000 payments with his evil machinations. It’s always about creating some bullshit talking point for the propagandists at Fox News and talk radio.

“If we start adding poison pills to the $2,000 payment bill, that is just another way of telling the American people that this body doesn’t support $2,000 payments,” Sen. Chris Murphy, a Connecticut Democrat, said of the additional provisions.

McConnell, with this alternative bill, is tying all of Trump’s demands into a single piece of legislation. While aides say it’s unclear if the bill will actually come up — there remains a possibility the 116th Congress comes to an end [on January 3] with no action at all — should it do so, it would serve as a way to address the President’s issues and give the two Georgia Republican senators in tight runoffs something to vote for.

Even without a vote, the existence of the bill itself would appear to address Trump’s demands from a Sunday statement that the Senate “start the process for a vote that increases checks to $2,000, repeals Section 230, and starts an investigation into voter fraud.”

By introducing the bill and moving to place it on the Senate calendar, McConnell has, technically, started that process. McConnell himself appeared to allude to the very specific language in his earlier Senate floor remarks, noting that the chamber would “begin a process” to address the President’s demands.

[A]s is often a hallmark of Trump’s dealings with Congress, it has remained unclear whether he wants the vote on expanded direct payments as a standalone measure or combined with the other elements. That ambiguity has, in a way, opened the door for McConnell’s legislative offer. [As I said, Trump and McConnell are simpatico on McConnell’s cynical poison pills bill.]

Before any action on stimulus payments, McConnell has made clear the priority for the chamber is to stay on track to process the override of Trump’s veto of the National Defense Authorization Act, which failed to include the changes Trump wanted to Section 230. McConnell initially attempted to set that vote for Wednesday, but Sen. Bernie Sanders objected and made clear he would draw the process out unless the Senate held an up-or-down vote on the House-passed stimulus check measure.

“The working class of this country today faces more economic desperation than at any time since the Great Depression of the 1930s,” said Sanders, a Vermont independent who has been central in the push to increase the size of the direct payments.

Sanders, however, can’t stop the NDAA override vote — only draw it out. And several GOP aides noted that a longer process on the NDAA could aid Republicans who are opposed to the check entirely and want no action taken at all on the direct payments issue before the end of the 116th Congress on Sunday.

Earlier Tuesday, McConnell pledged on the Senate floor only that he would “begin the process” of addressing the issues raised by Trump. He never committed to any votes, on the stimulus checks or anything else. This provides him a pathway should he decide to take it, but nothing is locked in at this point, aides say.

Your $600 payment is all you are going to get from Mitch McConnell and his minions in the Senate. 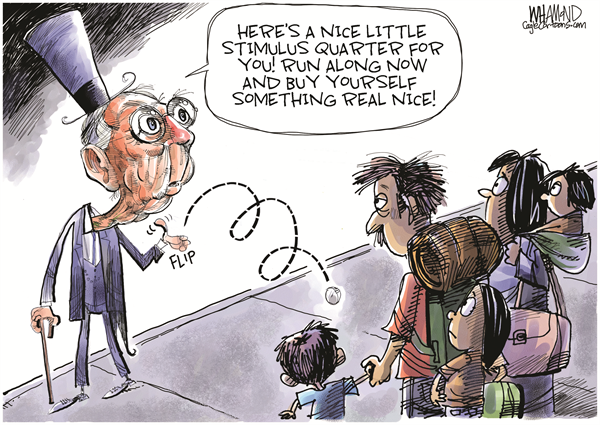