Last June, a band of reactionary zealots stampeded the State Board of Education meeting to protest against common-sense reforms in the language of the sex education health guidelines.

These village idiots have apparently found new support in the current Arizona Speaker of the House, Russel Bowers.

At a weekend meeting sponsored by the Southern Poverty hate group designated Family Watch International (for their goals working against transgender individuals and of enforcing conversion therapy) and attended by about 50 people (among the attendees were members of the extremist Patriot Movement and racially intolerant Senator Sylvia Allen), at an East Valley Charter School, Mr. Bowers asserted, as reported by multiple media outlets like Az Central, the Phoenix New Times, and Arizona Mirror, that: 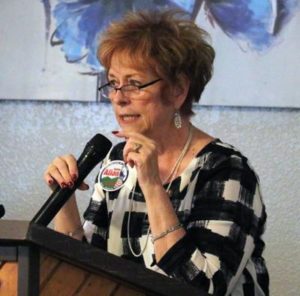 Senator Allen, preying on the fears of the “crowd,” said that she feared Arizona, if it gets a Democratic majority in the State Legislature in 2021, would adopt new health standards that take away the choice from parents on whether or not to enroll their child in a health class that covers sex education.

Reacting to what was said at this event, Superintendent Hoffman, on her Facebook Page, wrote:

“As elected state leaders, it is critical we serve our state by collaborating on policies, even when our perspectives differ. My office has reached out to many legislators, including Speaker Bowers and Sen. Allen to find time for us to meet prior to the next legislative session.”

“I’ve had productive meetings with members of both parties, but my requests to Speaker Bowers and Sen. Allen have been met with silence. We should be able to have rational, civil conversations – and even work to find common ground on the issues facing our state’s education system.”

“It is extremely disappointing and discouraging that Speaker Bowers and Sen. Allen would rather publicly spread outrageous falsehoods than meet with me and listen to each other.”

“Sex-ed is an issue that should be addressed at the local district level, with local school boards choosing curriculum with the community and parental input. But at a minimum, our students deserve medically and scientifically accurate information that is also age-appropriate.”

“The health and safety of Arizona’s students is one of my top priorities, and I hope Speaker Bowers and Sen. Allen will be able to find time to meet and discuss ways we can come together to best support Arizona’s students.”

Speaker Bowers and Senator Allen are the radicals for fanning the flames of intolerance and seeking to keep Arizona children and parents in the Dark Ages of health education.

They would do better to attend conferences attended by specialists supporting common-sense solutions for the health of the children and greater community, not ignitors for hate hoping to divide everyone and punish people like inquisitors.

Hopefully, they will accept the Superintendent’s invitation and pick up the phone and call her office.

That would be better for everyone.