Every day in every way, Donald Trump becomes more dictatorial, enabled by authoritarian TeaPublicans who also do not support our constitutional democracy. 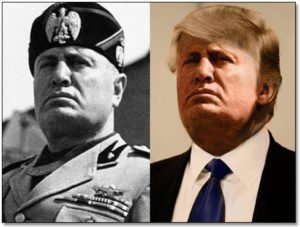 Our always insecure egomaniacal Twitter-troll-in-chief continued his assault on the judiciary, the rule of law and fundamental constitutional rights by asserting that “we don’t need no stinkin’ due process!”

President Trump unleashed an aggressive attack Sunday on unauthorized immigrants and the judicial system that handles them, saying that those who cross into the United States illegally should be sent back immediately without due process or an appearance before a judge.

“We cannot allow all of these people to invade our Country,” Mr. Trump tweeted while on the way to his golf course in Virginia. “When somebody comes in, we must immediately, with no Judges or Court Cases, bring them back from where they came.”

Spoken like a true tin pot dictator from a banana republic — or his pal Putin.

[T]he president, who has always dug his heels in when criticized, has not backed back down from his hard-line talk, even amid a national outcry over a detainment policy that has resulted in the separation of more than 2,300 children from their families.

He has instead gone on the offensive, complaining to aides about why he could not just create an overarching executive order to solve the problem, according to two people familiar with the deliberations. [“We don’t need no stinkin’ Congress! Just declare me dictator for life.”] Aides have had to explain to the president why a comprehensive immigration overhaul is beyond the reach of his executive powers.

And privately, the president has groused that he should not have signed the order undoing separations.

“Our system is a mockery to good immigration policy and Law and Order,” Mr. Trump tweeted Sunday, adding, “Our Immigration policy, laughed at all over the world, is very unfair to all of those people who have gone through the system legally and are waiting on line for years! Immigration must be based on merit.”

But Mr. Trump’s call to ignore due process faced both constitutional questions and dissension from Republicans in Congress, some of whom have insisted that the number of judges be increased so migrant families can have their cases heard more quickly.

Trump rejects calls for more immigration judges: ‘We have to have a real border, not judges’: “Thousands and thousands of judges they want to hire. Who are these people?” Trump continued. “When we vet a single federal judge it goes through a big process.” “Seriously, what country does this? They said ‘sir, we’d like to hire 5,000 or 6,000 more judges,” Trump continued. “Now can you imagine the graft that must take place?” said the Grifter-in-chief.

Federal immigration courts faced a backlog of more than 700,000 cases in May, and cases can take months or years to be heard.

Senator Ted Cruz, Republican of Texas, has proposed doubling the number of judges to roughly 750, while Senator Ron Johnson, Republican of Wisconsin and chairman of the Senate Homeland Security Committee, said Sunday on CNN’s “State of the Union” that he believes an additional 225 judges are needed. He noted that only 74 of the current immigration judges are serving at the border. “We need to increase that,” Mr. Johnson said.

Many on Capitol Hill believe legislation is necessary to deal with the executive order, since it allows for indefinite detentions. Under a 1997 consent decree known as the Flores Settlement Agreement, migrant families can be detained for no more than 20 days, leaving the executive order’s status in court in doubt.

Not really. The executive order is a clear violation of the Flores Settlement Agreement and will be enjoined in the next few weeks. Our wannabe tin pot dictator wants to create this constitutional crisis with the courts so he can step up his attacks on the judiciary, the rule of law and fundamental constitutional rights, because that’s what authoritarian despots do. Undermining the rule of law and the courts on this issue also serves his purpose of undermining them for what is expected soon from the Special Counsel’s Russia investigation. Trump is “working the refs” with his worshipers in the personality cult of Donald Trump.

Trump has a dangerous end-game in mind, and cowardly weak Republicans in Congress are the ones who have to stop him. Speaking of which …

“It makes it very difficult,” Mr. Flake said on ABC’s “This Week,” continuing, “It’s difficult in any event, right, in an election year where the president has decided to have this at the forefront of the Republican election strategy to paint the Democrats as soft on immigration.”

He added: “I don’t know how in the world we’re going to fix this in the short-term, given the Flores decision and given the lack of infrastructure, judges to process these claims. It’s really a big mess.”

Laurence H. Tribe, a constitutional law professor at Harvard, said in an email that the Supreme Court has repeatedly held that “the due process requirements of the Fifth and 14th Amendments apply to all persons, including those in the U.S. unlawfully.”

“Trump is making the tyrannical claim that he has the right to serve as prosecutor, judge and jury with respect to all those who enter our country,” Mr. Tribe said. “That is a breathtaking assertion of unbounded power — power without any plausible limit.”

The Fifth Amendment mandates the due process of law, and the 14th Amendment, in part, expanded due process rights for immigrants, with case law asserting those rights dating back to 1886.

Attorney General Jeff Sessions, who has made illegal immigration a focus of his career, has moved to back up the president’s words with action in recent months. In April, Mr. Sessions announced a “zero tolerance” immigration policy, which set off the mass separation of families that the president sought to end with his executive order last week.

Criminal prosecutions for illegally crossing the southwestern border jumped to 8,298 in April, the month Mr. Sessions announced the zero-tolerance policy, an increase of 30 percent from March, according to data from the Transactional Records Access Clearinghouse, a research institute at Syracuse University. Last week, the Defense Department lent 21 lawyers to the Justice Department to focus on prosecuting a backlog in border crossing cases. And on Sunday, the defense secretary, Jim Mattis, said the Pentagon was looking at using two bases to hold an unknown number of migrants, though he would not comment on their location or whether they would house children.

Omar Jadwat, director of the Immigrants’ Rights Project at the American Civil Liberties Union, called the president’s demand to dispense with due process illegal. “Any official who has sworn an oath to uphold the Constitution and laws should disavow it unequivocally,” he said.

Mr. Trump has long been a critic of immigration judges, saying they were not effective in stopping the flow of people coming into the country, sometimes using incorrect numbers to make his point.

“We have thousands of judges. Do you think other countries have judges?” Mr. Trump said during a round-table discussion in May. “We give them, like, trials. That’s the good news. The bad news is, they never show up for the trial. O.K.?”

There are actually fewer than 400 judges dedicated to such work, according to the website PolitiFact.

The Justice Department’s data from FY 2016 puts “in absentia” cases — immigration cases for which there are no defendants — at just 25 percent, not the 97 percent the president estimates. The data point that destroys Trump’s argument for detaining immigrants.

Mr. Trump’s careening from one extreme to another has been a staple of his campaign and presidency, allowing people to hear what they want in what he says — and leaving his White House to sort through a messy pile of conflicting directives and Congress to grasp for clues about which bills he might support.

The prospects for the “GOP compromise” [among factions of the GOP] bill in the House are iffy at best; some conservatives are balking at the citizenship provisions, which critics regard as “amnesty.” If it fails, Mr. McCaul said the House may be forced to consider a narrower measure — a so-called skinny bill — that would address only the issues surrounding detention of migrant families.

Our racist-in-chief is not going to sign a “skinny” bill, because he is not going to give up the leverage his child hostages give him to extort funding from Congress for his “big beautiful wall” on the Mexico border — you know, the one he said Mexico was going to pay for. MAGA suckers!