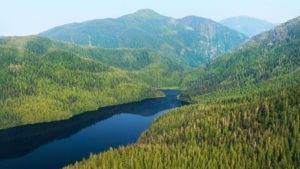 Together with British Columbia’s Great Bear Rainforest in Canada, the Tongass encompasses the largest intact temperate rainforest on Earth.

The move would undo logging restrictions that have been in place for nearly 20 years, according to The Washington Post, impacting more than half of the national forest.

Under the Clinton-era “roadless rule,” construction of roads were barred in the forest, thereby restricting commercial logging, energy, and mining projects (only certain road projects approved by the Forest Service were allowed).

The rule has faced challenges over the years, though, including by President George W. Bush who tried unsuccessfully to reverse it. Alaska Gov. Mike Dunleavy (R) and Sen. Lisa Murkowski (R) have also called for Trump to exempt the state from the rule.

“It should never have been applied to our state, and it is harming our ability to develop a sustainable, year-round economy for the Southeast region,” Murkowski said in a statement to the Washington Post.

Environmentalists, however, fear the implications of opening up the rainforest to commercial activities.

The pristine forest includes thousands of islands along with glacial fjords and old-growth cedar, spruce, and hemlock trees — old-growth trees are those that have generally grown undisturbed for at least 120 years. The area supports countless wildlife, including all five species of Pacific salmon, brown bears, wolves, and Bald Eagles.

Over the years, logging has threatened the oldest — and largest — trees. But while only 9% of the rare forest has so far been threatened by logging, according to the Audubon Society “perhaps half of the big-tree old growth has been cut.”

The forest is also a vital player in tackling climate change.

“The Tongass stores hundreds of millions, if not over a billion, tons of carbon, keeping the heat-trapping element out of the atmosphere,” wrote Earthjustice, which tweeted that the old-growth trees provide a “MAJOR BUFFER” against climate change.

Cutting down ancient trees risks not just releasing the carbon stored in them over the past century but also reducing the forest’s ability to store new carbon.

News of the Trump administration’s logging intentions in Tongass come as another major forest suffers devastating wildfires. In Brazil, more than 26,000 forest fires have been recorded in the Amazon this month — the most in a decade.

Like the Tongass, the Amazon — often referred to as the “lungs” of the planet — plays a vital role in storing carbon as well as critical habitat to endangered species.

Brendan Jones writes at the Washington Post, We need the Tongass now more than ever:

[A]t a moment when so much of the Brazilian rainforest goes up in cinders, the abolishment of federal protections for the Tongass National Forest is maddening nonetheless. This decision will cost the country its most substantial set of lungs, as well as our largest stand of old-growth trees — some of which began life more than 1,000 years ago. 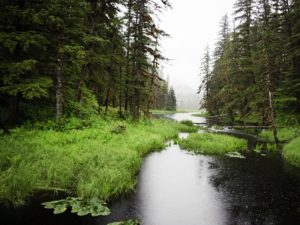 Encouraged by his friend John Muir, President Theodore Roosevelt designated the Tongass a national forest in 1907. An enchanted world of glaciers, fjords and colossal stands of spruce and hemlock, today the 17 million-acre area is the world’s largest intact temperate rainforest, covering 80 percent of the Alaskan Panhandle — known colloquially as “Southeast.” Referred to by Forest Service rangers as the “crown jewel,” the Tongass provides habitat for some of America’s most iconic creatures: bald eagles, salmon, wolves. Baranof Island, where I live with my wife and two daughters, is home to 1,500 brown bears — about 1 for every 6 people in town.

Four years after I took a leave from college to work in the Alaska fisheries, President Bill Clinton created the 2001 Roadless Area Conservation Rule, prohibiting the building of most roads in national forests. The government held more than 600 public hearings and collected 1.6 million comments, the overwhelming majority of which were in support of protecting more than 58 million acres of land across the country — including 9.6 million acres of forest in the Tongass.

But late last February, Air Force One stopped on the way home from Vietnam, and President Trump met with Alaska Gov. Mike Dunleavy, a Republican. “Mike, any time you have a problem, you call me,” Trump announced.

Dunleavy did just that, following up with a letter requesting that the Tongass be fully exempted from the Roadless Rule to “save what’s left” of the timber industry. Agriculture Secretary Sonny Perdue was supposed to suggest a partial exemption from the rule in July, but Alaska Sen. Lisa Murkowski (R) signaled in a recent radio interview that her expectation was for Trump to push for a full repeal of the federal law, allowing roads to be built through the forest. In an Aug. 23 call with Sen. Dan Sullivan (R-Alaska) and Dunleavy, Trump promised as much, telling the governor that his logging request was “moving along.”

As so many of the folks commenting last fall to the Forest Service pointed out, Southeast Alaska’s economy cannot afford this return to the timber bonanza days. While logging once thrived here, the largest mill in Southeast today employs just a few dozen people. Meanwhile, the tourist industry creates 10,000 jobs, adding more than $1 billion a year to our economy, while fishing brings in another $1 billion.

As an Alaska presenter on Princess Cruises for the past three years, I can hear the collective intake of breath as we sail along the Inside Passage through a gauntlet of clearcuts. People come here from around the world to see ancient, pristine forests — not moonscapes. And our salmon need old-growth forests to spawn.

On top of it all, timber harvest is notoriously costly for the federal government — something the president should be paying attention to, considering the ballooning deficit. Since 1982, it’s been estimated that the Forest Service has lost more than $1 billion in Tongass timber sales. The federal government heavily subsidizes timber harvests, costing taxpayers some $20 million annually between 2008 and 2017.

Known in the 1990s as “the forest that sells trees for the price of a Big Mac,” today the Tongass deserves better. Retaining more atmospheric carbon than any other forest in the United States, public or private, the spruce, hemlock and cedar that Trump will expose to logging work as the first line of climate change defense, scrubbing carbon from the air and giving back an oxygen so pure that people arrive on our island to take what has come to be known as “forest baths.”

I don’t want to pass on a field of clearcuts to my daughters. Nor should they have to inherit a forest bored through by logging roads, with uniform, sterile secondary growth taking the place of behemoths that took root before the Renaissance.

As Trump might say, we have the biggest trees, the best trees — people come from around the world to see our trees! As our planet warms and the Amazon burns, we need the Tongass. Not only for our livelihoods or our legacy — but to breathe.

Last week’s other move to rescind environmental rules governing emissions of methane, a powerful greenhouse gas, brings to 84 the total number of environmental rules that the Trump administration has worked to repeal. Officials at the White House, the Environmental Protection Agency and other agencies have called the regulations burdensome to the fossil fuel industry and other businesses. Major Climate Change Rules the Trump Administration Is Reversing:

Half of those environmental rollback attempts, like the new methane reversal, will undercut efforts by previous administrations to reduce emissions and fight climate change. Many of these efforts have been challenged in the courts; whether the administration will succeed in achieving all of its goals is far from certain.