I covered this from a macroeconomic impact in ‘Trump Taxes’ would be paid by American consumers on Mexican goods, but the Arizona Republic covers the microeconomic impact on Arizona. Arizona leaders predict ‘terribly damaging’ effects from Mexico “Trump taxes”:

Really? Back in March, Gov. Ducey emphasized the state’s relationship with Mexico, economic boom it provides: “Mexico is our number one trading partner times four,” Ducey said. “We’ve tended to the relationships.” 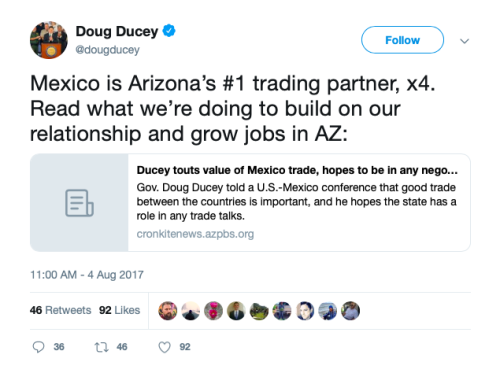 As E.J. Montini says, “I recall the governor saying not too long ago, ‘I am no fan of tariffs. I am someone who supports free trade.'” Now, Trump is about to ruin Arizona’s economy, and Gov. Doug Ducey is OK with that. “Gee, governor, all that sucking up you’ve been doing with the president, and this is what we get?”

Arizona’s proximity to Mexico as a border state puts it in jeopardy for job losses and other fallout if the country retaliates or if the higher prices slow international commerce.

Glenn Hamer, president and CEO of the Arizona Chamber of Commerce and Industry, described the tariffs as a “terrible idea” and a “prescription for a self-induced economic slowdown” that will harm American consumers.

He predicted the tariffs will be “terribly damaging.”

In a written statement to The Arizona Republic, Sen. Martha McSally, R-Ariz., on Friday parted ways with Trump on the tariffs, citing harm to the economy. She said Congress must act to address the “undeniable crisis” at the border.

“While I support the President’s intention of stopping unchecked illegal immigration, I do not support these types of tariffs, which will harm our economy and be passed onto Arizona small businesses and families,” she said.

“I have consistently opposed tariffs and introduced legislation to prevent harmful trade wars,” she said in a written statement. “Raising taxes on Arizonans won’t solve the problems we face at the border. Congress and the Administration need to work together to secure our border and protect commerce that contributes billions to our economy.”

U.S. Rep. Ann Kirkpatrick, D-Ariz., whose Tucson-based district spans much of the state’s border with Mexico, responded on Twitter with disbelief.

“I thought you were a businessman,” Kirkpatrick said in a message directed at Trump. “This is a horrible policy and will have devastating impacts on our local economy. Why are you hurting our Southern Arizona small businesses? Our border is an asset not only in (her district) but the entire state of Arizona.” 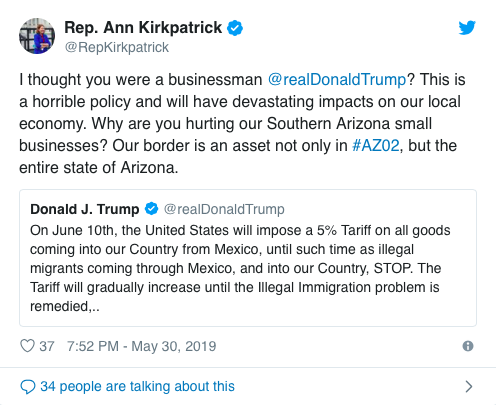 “There’s got to be a better way,“ Schweikert said Friday on Phoenix radio station KFYI (550 AM).

Schweikert said the tariffs are in effect a double punishment to Arizona, which is already dealing with the influx of migrants.

Mexico easily ranks as Arizona’s largest export market, buying an average of $8.3 billion of the state’s exports annually, according to the U.S. Department of Commerce and the International Trade Administration.

Arizona’s unemployment rate of 4.9 percent in April was above the U.S. jobless rate of 3.6 percent.

So how much are “Trump taxes” going to cost Arizonans? Tariff slapped on Mexican imports could cost Arizonans $63 each, report says:

Higher prices for American consumers and businesses would result from any new tariffs slapped on Mexican imports, and Arizonans could pay the sixth-highest economic cost in the U.S. in dollar terms, according to a new report.

A 5% tariff would cost Arizona businesses and consumers an average of about $63 a person annually, the report said. The higher prices could be passed through to consumers, absorbed by businesses or some combination.

Americans in general would face $17.3 billion in additional expenses if the U.S. imposes a 5% tariff on all Mexican goods starting June 10, as President Donald Trump has threatened.

Unless Mexico works harder to reduce the flow of illegal immigrants passing through from Central America, the White house has threatened to ratchet up the tariffs to 25% of the value of all Mexican imports by September.

“These tariffs will be paid by American families and businesses without doing a thing to solve the very real problems at the border,” said Neil Bradley, executive vice president and chief policy officer at the U.S. Chamber of Commerce, which conducted the study and opposes the tariffs.

The two largest categories of Arizona’s imports from Mexico, accounting for more than half the total, are electrical machinery/parts and vegetables.

Arizona businesses and consumers could face the sixth-highest overall tariff costs at $452 million, assuming a 5% tariff on Mexican goods and no reduction in demand from the higher prices.

That would rise to $2.26 billion in costs if the tariffs eventually increase to 25%, as the White House has threatened. Those figures are based on Arizona imports of Mexican goods that exceeded $9 billion last year.

“Tariffs will contribute to higher consumer prices and higher prices for businesses and producers,” said George Hammond, an economics professor at the University of Arizona.

In addition, businesses here might not be able to export as much to Mexico, either, because of possible retaliatory measures or Mexicans having less income to purchase U.S. items, Hammond said.

States like Arizona that are more economically connected to Mexico will feel the greatest impact, said Dennis Hoffman, an economics professor at Arizona State University.

This is just a stupid idea from Stephen Miller, the “Trump whisperer” on white nationalist anti-immigration policies. Neither one of these fools has a clue about how economics and tariffs work.