I have been trying to avoid discussing the new season of Celebrity Apprentice: White House Edition with Amorosa Manigault-Newman.

But last night I happened to catch an interview of former CIA Director John Brennan on The Last Word with Lawrence O’Donnell which was scheduled after this tweet yesterday:

Lawrence O’Donnell wanted to know what Brennan meant by his comment “so dangerous to our Nation.” Watch the interview. 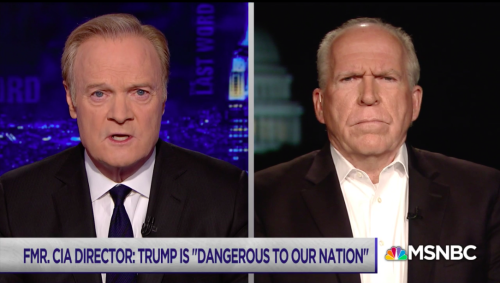 It would appear that our egomaniacal narcissist Twitter-troll-in-chief “Dear Leader” must have been watching (although he would deny it) or reading his Twitter responses, because today the always vindictive and petty Trump revoked former CIA Director Brennan’s security clearance:

The courtesy of allowing a former administration official to retain security clearance has been “outweighed by the risk posed by his erratic conduct and behavior,” Trump said in the statement. “Mr. Brennan has a history that calls into question his objectivity and credibility.”

He added that Brennan “has recently leveraged his status … to make a series of unfounded and outrageous allegations, wild outbursts on the internet and on television, about this administration.”

Let’s be clear: John Brennan had his security clearance revoked not because he is a security threat as Trump falsely asserts, but because he is openly and publicly critical of “Dear Leader.”

This is a naked attempt by our banana Republican wannabe dictator to punish and silence his critics, and more importantly, to chill the opinions of employees of the United States working in the intelligence agencies. That can have consequences for our national security.

Trump’s authoritarian tendencies have crossed the line into being “dangerous for our Nation,” proving Brennan’s point.

There is a tell here that this statement was dated July 26, and Trump has been holding it in his back pocket until he needed a distraction after losing control of the media narrative in Celebrity Apprentice: White House Edition with Amorosa Manigault-Newman, in which Lordy, she has tapes!, and she claims Trump knew of hacked Clinton emails before they were released — if true, collusion!

Brennan, who served as director of the clandestine intelligence agency under President Barack Obama, is a frequent critic of Trump’s and a senior national security analyst for NBC News and MSNBC.

He fired back during an interview with MSNBC’s Nicolle Wallace Wednesday afternoon, and on Twitter.

“I’ve seen this type of behavior and actions on the part of foreign tyrants and despots and autocrats for many, many years during my CIA and national security career,” Brennan told Wallace. “I never, ever thought that I would see it here in the United States.”

An official familiar with the decision confirmed to NBC News that Director of National Intelligence Dan Coats was not informed prior to the announcement.

For decades, former national security officials have retained classified clearance in part so that they can be consulted on closely held information by officials in ensuing administrations. Sanders acknowledged that reason — and courtesy — as justifications for many former officials to continue to hold their clearances.

Sanders declined to provide any evidence that Brennan had used his security clearance to improperly access or transfer classified information or to make money.

Brennan had criticized Trump as recently as Tuesday night on MSNBC’s “The Last Word with Lawrence O’Donnell, calling him “dangerous to our nation.” Brennan slammed Trump as “the most divisive president we have ever had in the Oval Office” and someone who has “badly sullied the reputation of the office of the presidency.”

When the White House first threatened to pull Brennan’s clearance [on July 23] — along with those of other former and current administration officials — House Speaker Paul Ryan, R-Wis., said that Trump was just “trolling people” and wouldn’t follow through, adding that the process itself was under the purview of the executive branch.

Shows how much this idiot enabler knows.

“This has zero to do with national security,” tweeted Michael Bromwich, an attorney for McCabe. “This is an Official Enemies List. The offense: exercising 1st Amendment rights.”

“The fact is that security clearances have never been politicized like this in our history,” Rhodes said on MSNBC.

Brennan says Trump is revoking his security clearance “to try to intimidate and suppress any criticism of him or his administration.”Fmr. CIA Director John Brennan: This is an abuse of power.

Despot Donald Trump is turning this country into a banana republic. Don’t accept or normalize his despotic behavior. Defend American values and constitutional rights and liberties. Resist! Do not go quietly into that dark night of Trumpism, the new American fascism.