Fascist regimes prosecute their political opponents and critics to solidify their authoritarian hold on power, but this is exactly what “Billie belongs behind Barr’s” investigate the investigators review of the investigation into Russian collusion with the Trump campaign in 2016 proposes to do.

Barr has essentially been promising to do this ever since he sent an unsolicited 20-page memo to the Justice Department in June 2018 critiquing special counsel Robert Mueller’s investigation into Russian election interference, in a bid to lobby for the attorney general job. It is why Trump appointed him.

On May 13, 2019, Attorney General William Barr appointed U.S. Attorney John Durham to review the origins of the 2016 Justice Department investigation into Russian interference in the 2016 elections. Again, Bill Barr has been literally promising conservative media personalities since May 2019 that he will be prosecuting the FBI and Intelligence Community personnel who investigated the Donald Trump campaign’s cooperation and collusion with Russian intelligence sources. 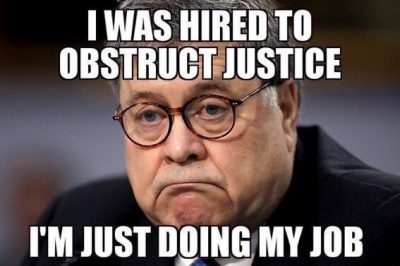 Bill Barr came into the Trump administration with a conclusion already drawn, and has been working backwards ever since to cherry-pick through emails and memos and depositions to try to build a plausible sounding case against the investigators, even though on December 9, 2019, his own DOJ Inspector General issued his report and concluded that the 2016 Russia investigation had had a legitimate purpose and that there was no evidence of political bias against President Trump in how the investigation had been initiated or undertaken.

The House and Senate Intelligence Committees also issued their own lengthy reports drawing the same conclusion.

As I’ve explained several times, there is a longstanding DOJ policy of not doing anything that could influence the outcome of an election (yes, former FBI Director James Comey violated this policy to the detriment of Hillary Clinton). We are now inside the DOJ’s informal “60 day” window.

White House Chief of Staff Mark Meadows appeared to claim that he has seen documents—relevant to U.S. Attorney John Durham’s probe of the origins of the Russia investigation—which implicate several Trump and Obama administration officials in potentially illegal conduct. While Meadows did not provide any specifics to substantiate his assertion, legal experts specializing in government affairs immediately wondered and worried if the president’s chief of staff had somehow become privy to details of Durham’s mostly hidden investigation.

Appearing on Fox Business Network on Tuesday morning, Meadows told host Maria Bartiromo that while he was unable to provide an update on the progress of Durham’s investigation, he could confirm that he has seen “additional documents” confirming that— “at worst”—several individuals had engaged in still-unspecified illegal activities for which they should go to jail.

“Additional documents that I’ve been able to review say that a number of the players – the Peter Strzoks, the Andy McCabes, the James Comeys, and even others in the administration previously – are in real trouble because of their willingness to participate in an unlawful act. And I use the word ‘unlawful’ – at best it broke all kinds of protocols and at worst people should go to jail as I mentioned previously,” Meadows said.

Washington, D.C.-based national security attorney Bradley Moss and CNN legal analyst and former federal prosecutor Elie Honig immediately questioned why Meadows or the White House would have been granted any special access to details of Durham’s investigation—if, indeed, that’s what Meadows was suggesting.

“Why would the [White House] know the details of what Durham has been reviewing?” Moss tweeted.

“Yes and what the hell is the White House Chief of Staff doing with sensitive people enforcement documents like these? Who sent them over? Why?” asked Honig.

“DOJ policy forbids publicly describing evidence in a criminal case, even after charges are filed, let alone before, because it could improperly influence a jury. This is an improper use of law enforcement authority for a political purpose,” she said.

Durham was hand-picked by U.S. Attorney General Bill Barr in May 2019 to oversee an administrative review of the FBI’s “Crossfire Hurricane” investigation into Trump’s 2016 presidential campaign. By Oct. 2019, it was confirmed that the investigation would also be looking into possible criminal conduct and include actions taken under former special counsel Robert Mueller’s Russia probe.

The probe has been lambasted by Democrats as politically motivated and redundant in light of in-depth reports on the matter from the Justice Department Inspector General’s Office and the Senate Intelligence Committee. Additionally, Barr, who has long maintained that U.S. intelligence agencies “spied” on a presidential campaign, has been publicly pressured by President Donald Trump to use the Durham investigation to prosecute his political enemies (Barr claims he feels no pressure).

Last month, Trump seemed to hint in an interview on Fox Business that the legacy of Attorney General William P. Barr would be defined by whether he investigated former president Barack Obama and former vice president Joe Biden, Trump’s opponent in the 2020 campaign, as part of a review Barr ordered of the Russia case. Barr has said neither man is under investigation.

“It would be highly inappropriate for there to be White House coordination with Durham’s probe in this manner,” Moss told Law&Crime. “However, it is not clear Meadows has actually seen something only Durham would know about or if he is merely referencing documents Congressional allies sent to Durham for consideration.”

Former Intelligence Community attorney Susan Hennessey took a similarly cautious approach to Meadows’s statements, saying it may have been nothing more than a ham-fisted attempt to spin the story in the president’s favor.

“It’s not clear Meadows is actually referring to documents provided by DOJ or investigation materials. He just says it’s something he claims is relevant,” she wrote. “I think there are even odds he’s just trying to spin a story out of some dumb internet conspiracy.”

But former head of the U.S. Office of Government Ethics Walter Shaub, a vehement critic of the Trump administration and the president, interpreted Meadows’ statement in the most unfavorable light. He said it looked more like Meadows accidentally revealed that the White House was using the DOJ for political purposes.

“Mark Meadows is touting his knowledge of an ongoing investigation by AG Barr’s handpicked lackey, John Durham, into Obama admin officials—inadvertently revealing the WH is corruptly using the Justice Department as a political weapon, just as leaders do in authoritarian countries,” he tweeted.

I don’t believe there is any good reason to give Meadows the benefit of the doubt, given how often all the members of the Trump administration have been publicly speaking about this open investigation, and literally promising conservative media personalities that there will be charges filed for well over a year. Time is running out for Barr to act.

There is also the chilling effect that this has on the DOJ, FBI and Intelligence Community in investigating Russia’s ongoing interference in the 2020 election for the benefit of the Trump campaign. There is all the appearances recently of cooperation and coordination between the Trump campaign and Russian intelligence agencies. Is it a Coincidence That Moscow Is Peddling the Same Lies as the Trump Campaign? No.

Because of their highly unethical actions, any announcement of indictments will be tainted as a politically motivated prosecution of Donald Trump’s political “enemies,” i.e., patriotic public servants who were doing their job in the unimaginable circumstance of a presidential candidate who was a traitor to his country.

When Bill Barr does make his announcement, mark your calendars that day as the day that America officially became a banana republic under the rule of a tyrannical wannabe tin pot dictator.