The American ideal of justice is engraved on the U.S. Supreme Court building: “Equal Justice Under Law,” meaning that your status or station in life is not determinative, we are a nation of laws, and the lowest caste will receive a fair and just trial the same as the wealthy privileged caste.

That ideal has never been a reality in America. Justice is not equal under law. There are two systems of justice, one for the wealthy privileged caste, and one for for everyone else.

Oh sure, occasionally someone from the wealthy privileged caste gets dinged and goes to prison, but it occurs so infrequently that those cases achieve notoriety in the media.

Remember Leona Helmsley, the “queen of mean,” convicted of tax evasion in 1989, of whom her former housekeeper testified at trial that she had heard Helmsley say: “We don’t pay taxes; only the little people pay taxes“? Helmsley received a sentence of sixteen years, but she was required to serve only nineteen months in prison, and two months under house arrest. Wealth has its privileges even when you’re a convicted felon.

Which brings me to Paul Manafort’s sentencing for tax evasion and bank fraud yesterday. What Judge T. S. Ellis III did was a miscarriage of justice, and spat upon the American ideal of justice, “Equal Justice Under Law.” (Judge Ellis has a history of going easy on white collar crimes). It undermines the very integrity of our judicial system. Paul Manafort Is Sentenced to Less Than 4 Years in 1 of 2 Cases Against Him:

Paul Manafort was sentenced on Thursday to nearly four years in prison in the financial fraud case that left his grand lifestyle and power-broker reputation in ruins.

The sentence in the highest-profile criminal case mounted by the special counsel’s office was far lighter than the 19- to 24-year prison term recommended under sentencing guidelines. Judge T. S. Ellis III of the United States District Court in Alexandria, Va., said that although Mr. Manafort’s crimes were “very serious,” following the guidelines would have resulted in an unduly harsh punishment.

The evidence in the case before Judge Ellis showed that Mr. Manafort hid millions of dollars of income in overseas accounts and lied to banks to obtain millions more in loans — a financial scheme that prosecutors said was rooted in greed and in Mr. Manafort’s sense that he was above the law.

They described him as a hardened, remorseless criminal who never fully accepted responsibility for his offenses and who continued to lie to federal prosecutors even after he pleaded guilty to two conspiracy counts in a related case in Washington and agreed to cooperate with the special counsel’s office last fall.

But defense lawyers cited Mr. Manafort’s age, health problems and lack of a criminal record. He will turn 70 next month.

Judge Ellis said that Mr. Manafort “has lived an otherwise blameless life,” and he cited other tax cases that had resulted in minimal prison time. “The government cannot sweep away the history of all these other sentences,” he said.

The judge ordered Mr. Manafort to pay $25 million in restitution and a $50,000 fine. He also gave Mr. Manafort credit for the nine months he had already spent in jail, which could mean Mr. Manafort would be released in just over three years.

Judge Ellis’ comment that Manafort “has lived an otherwise blameless life” is mind-boggling and shocks the conscience of anyone who knows anything at all about the life and times of Paul Manafort. Franklin Foer of The Atlantic, who has done the most extensive reporting on Paul Manafort, responds to Judge Ellis. The ‘Otherwise Blameless Life’ of Paul Manafort:

“He has lived an otherwise blameless life,” said Judge T. S. Ellis as he sentenced Paul Manafort to just 47 months in prison on Thursday.

In an otherwise blameless life, Paul Manafort lobbied on behalf of the tobacco industry and wangled millions in tax breaks for corporations.

In an otherwise blameless life, he helped Philippine President Ferdinand Marcos bolster his image in Washington after he assassinated his primary political opponent.

In an otherwise blameless life, he worked to keep arms flowing to the Angolan generalissimo Jonas Savimbi, a monstrous leader bankrolled by the apartheid government in South Africa. While Manafort helped portray his client as an anti-communist “freedom fighter,” Savimbi’s army planted millions of land mines in peasant fields, resulting in 15,000 amputees.

In an otherwise blameless life, Manafort was kicked out of the lobbying firm he co-founded, accused of inflating his expenses and cutting his partners out of deals.

In an otherwise blameless life, he spent a decade as the chief political adviser to a clique of former gangsters in Ukraine. This clique hoped to capture control of the state so that it could enrich itself with government contracts and privatization agreements. This was a group closely allied with the Kremlin, and Manafort masterminded its rise to power—thereby enabling Ukraine’s slide into Vladimir Putin’s orbit.

In an otherwise blameless life, Manafort came to adopt the lifestyle and corrupt practices of his Ukrainian clients as his own.

In an otherwise blameless life, he produced a public-relations campaign to convince Washington that Ukrainian President Viktor Yanukovych was acting within his democratic rights and duties when he imprisoned his most compelling rival for power.

In an otherwise blameless life, he stood mute as Yanukovych’s police killed 130 protesters in the Maidan.

In an otherwise blameless life, he found himself nearly $20 million in debt to a Russian oligarch. Instead of honestly accounting for the money, he simply stopped responding to the oligarch’s messages.

In an otherwise blameless life, he tried to use his perch atop the Trump campaign to help salvage his sorry financial situation. He installed one of his protégés as the head of the pro-Trump super PAC Rebuilding America. His friend allegedly funneled $125,000 from the super PAC to pay off one of Manafort’s nagging debts.

In an otherwise blameless life, Manafort was found guilty of tax evasion on an industrial scale. Rather than paying his fair share to help fund national defense and public health, he kept his cash in Cyprus and wired it home to buy more than $1 million in bespoke clothing.

In an otherwise blameless life, he disguised his income as loans so that he could bamboozle banks into lending him money.

In an otherwise blameless life, he attempted to phone a potential witness in his trial so that they could align their stories.

In an otherwise blameless life, he systematically lied to Special Counsel Robert Mueller’s prosecutors, after he promised them his full cooperation.

In an otherwise blameless life, he acted with impunity, as if the laws never applied to him. When presented with a chance to show remorse to the court, he couldn’t find that sentiment within his being. And with Ellis’s featherweight punishment, which deviated sharply downward from the sentencing guidelines, Manafort managed to bring his life’s project to a strange completion. He had devoted his career to normalizing corruption in Washington. By the time he was caught, his extraordinary avarice had become so commonplace that not even a federal judge could blame him for it.

[This is] the latest example of a conflict that has vexed legal professionals and activists for decades: systemic inequality in the criminal justice system.

Yet, as a federal judge handed down his sentence in jam-packed Alexandria, Va., courtroom Thursday, and observers digested the judge’s decision — 47 months — Manafort’s case was immediately perceived as a high-profile instance of the justice system working one way for a wealthy, well-connected man, while working in another, harsher, way for indigent defendants facing lesser crimes.

“Paul Manafort’s lenient 4-year sentence — far below the recommended 20 years despite extensive felonies and post-conviction obstruction — is a reminder of the blatant inequities in our justice system that we all know about, because they reoccur every week in courts across America,” said Ari Melber, a legal analyst for NBC News, in a Thursday-night tweet.

Under federal sentencing guidelines, Manafort faced up to 24 years in prison for bank fraud and for cheating on his taxes, yet U.S. District Court Judge T.S. Ellis said that calculation was “excessive.” Manafort’s crime’s were “very serious,” Ellis said, but they didn’t warrant a punishment that could keep the 69-year-old imprisoned into his 90s.

Duncan Levin, a former federal prosecutor and expert in financial crimes, said Manafort’s sentence was very light “by any stretch of the imagination.” Manafort, who once agreed to cooperate with federal prosecutors but then was found to have lied to them, got a sentence that resembled someone’s who did not renege on their cooperation agreement, Levin said.

“His crimes went on for an extremely long time, at the very highest levels of our government and deeply affected our democracy,” Levin told The Washington Post. “To get away with it for such a short sentence is something that is absolutely mind-boggling.”

The sentencing inspired a flood of lawyers to dig through news clips and their own recent cases. What they found was dozens of examples of defendants who, in their view, were no where nearly as fortunate as Manafort.

Scott Hechinger, a senior staff attorney at Brooklyn Defender Services, an organization that provides legal representation to defendants who cannot afford it, used one of his recent clients, who was just offered a 36-to-72-month sentence, as an example. The crime? Stealing $100-worth of quarters from a residential laundry room. Hechinger’s client may wind up doing more time than Manafort, a man who defrauded the Internal Revenue Service out of $6 million.

Hechinger listed a half dozen more examples. Among them were a Brooklyn teenager who got a 19-years-to-life sentence for burning a mattress in the hallway of his apartment building, resulting in the smoke-inhalation death of an officer who responded to the scene. He also cited the case of Cyrstal Mason, an ex-felon who was sent back to prison for five years after voting in the 2016 presidential election while on probation — an act she says she didn’t know was illegal.

Laverone cited the case of one Turkish banker who was charged with participating in a multi-billion-dollar scheme, violating U.S. economic sanctions. In that case, guidelines called for a possible 105-year sentence. The banker got 32 months.

In a tweet, Sen. Amy Klobuchar (D-Minn.), a former prosecutor and presidential candidate, also denounced what she characterized as a lenient sentence. “Crimes committed in an office building should be treated as seriously as crimes committed on a street corner,” she said. “Can’t have two systems of justice!” 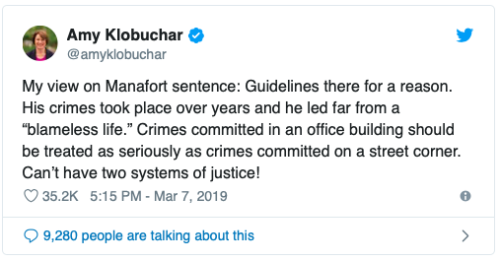 Hechinger and other advocates of criminal justice reform who weighed in on Manafort’s sentence stressed that they were not calling for harsher overall punishment — simply a justice system that was a little more just.

“I’m not advocating here or anywhere for worse treatment for all,” he said. “Just wish my clients received same treatment as the privileged few.”

When there are two separate systems of justice based upon wealth and privilege, there is no “equal justice under law.”