WW3: Dissent on the Homefront

WW3: Dissent on the Homefront

If you agree with the premise that the Coronavirus pandemic is World War 3 (and what else is the unprecedented nation-wide state of emergency, but a declaration of war against the pandemic?), then how should you react to that misguided minority who want to call off that war, and try to return to normal life before victory? 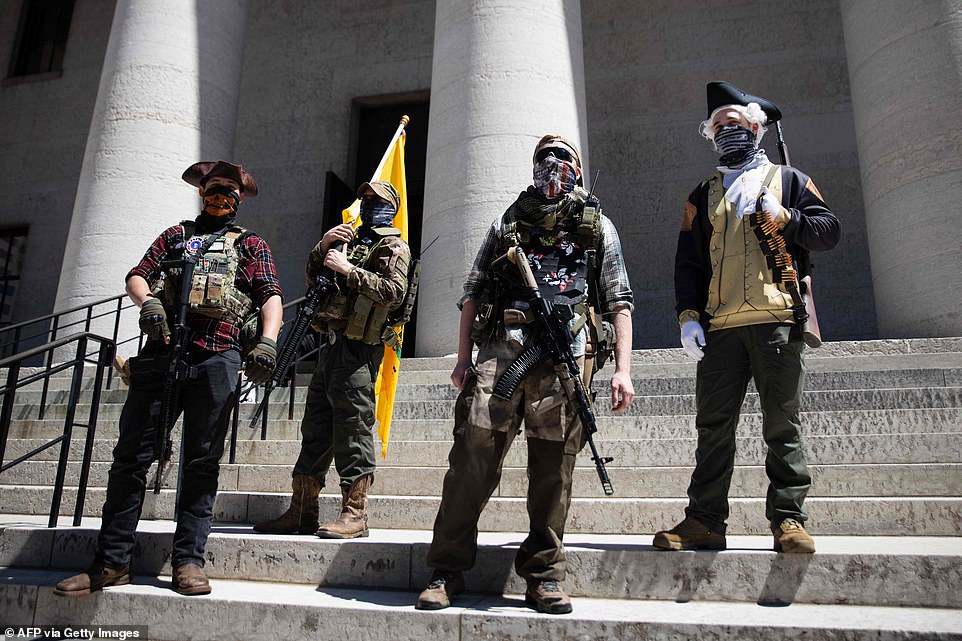 The “re-open now” activists are advocating recklessly lowering our only defense against the virus: physical distancing. They want to remove the restrictions on infection-spreading activities, well before we have the needed infrastructure to contain the inevitable consequences. They even baselessly and ignorantly claim that shut-down orders are unconstitutional. But the Constitution is not a suicide pact.

These “re-open now” activists effectively want to surrender to the virus and allow more people to die needlessly because re-opening the economy safely and sustainably is hard and expensive work. 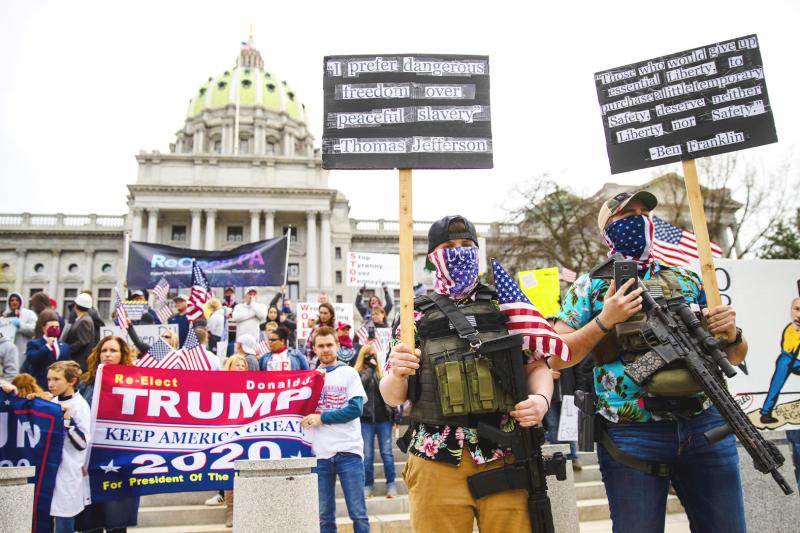 Is advocating for surrender to an implacable inhuman enemy a legitimate political act during a war, even in a democracy? I’m not so sure. Governors and the President declared this war under democratically enacted emergency powers and now everyone must abide by those decisions, not just for the good of all, but for their own good, too.

Are the “re-open now” minions marching on our capitals facing manifest injustices that demand civil disobedience? No. They are being asked to wear protective gear to protect others and themselves from a potentially deadly infection. They are being asked to limit their personal activities and contacts to only those essential to their well-being. They are being asked to curtail non-essential commercial activity until it can be done with some reasonable degree of safety. Are these required sacrifices a manifest injustice when we are in the midst of a war with thousands of lives on the line? Or are they necessary actions for the public good that they just don’t feel like they should have to follow because they are special snowflakes? You can infer my opinion easily.

I want our economy to re-open and function to the fullest extent possible. I want a prosperous and wealthy America, where people can work in safety, and enjoy their lives and freedoms. But I want it to be sustainable. And I don’t want it to be at the expense of innocent American lives.

Trading GDP for lives is not only monstrous, but it also values our lives far too cheaply, even from a purely utilitarian viewpoint. When you weigh the estimated GDP gains from reopening now, against the expected loss of lives that will result, any economic benefit is washed out by the economic losses and costs associated with those illnesses and deaths. The standard actuarial models value a single human life at $10M. The “re-open now” advocates far underestimate the economic damage and costs of additional deaths that are inevitable if states re-open without proper preparation. Even in their own, cold-blooded economic terms, the proposition of opening prematurely is not cost-effective. 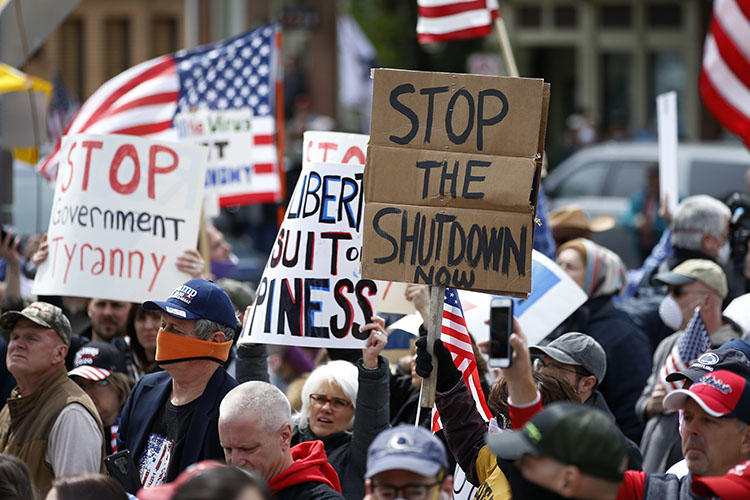 We are simply not ready to “re-open now”, even according to the White House’s own plan, which they tried to suppress because it requires far more work than many states’ and the Federal government are willing to do. “Re-opening now” will end in tragedy for those who will be stricken by the virus, but also for the economies of those states overly eager to re-open. Those states will quickly learn that they have to lock down hard once again, like it or not, when infections, hospitalizations, and death rates explode exponentially out of control.

You simply can’t have a normal economy during an uncontrolled epidemic, no matter how hard you want to believe it.

If we really want to sustainably and humanely re-open our economy, we have to rebuild our public health system, which we have been busily deconstructing and underfunding for decades, into one capable of controlling the epidemic. We currently don’t have the scale of services and capabilities in place that we need to return to any version of normal. We can’t “re-open now” without a predictable and deadly resurgence of infections, and the massive financial and humanitarian cost that entails. 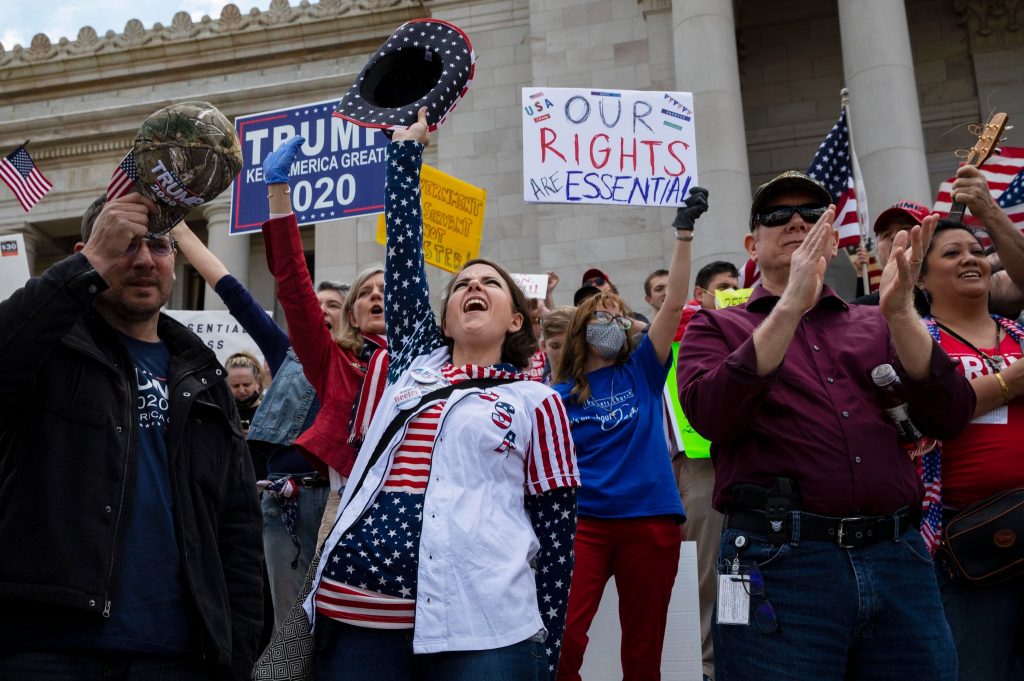 But, fortunately(?), this is a failure in leadership, not know-how. So we could actually do something about this by forcing our leaders to take some rational actions and adopt some scientifically sound policies.

We know exactly what must be done, we are simply not doing it because it will be hard and expensive. If the “re-open now” minority wants someone to blame for their frustrations, they should look to our leadership’s failure to plan and execute a public health response commensurate with the challenge we face.

We need to build out the capacity and capability to test, treat, trace, isolate, and prevent infections. Every serious plan (AEI and Harvard for example) to re-open the economy requires these elements, even the White House’s own. It really is as simple as that. It’s the details and the actual doing that’s hard.

Instead of pushing to create the public health infrastructure that we need to actually re-open our economy safely and sustainably, these “re-open now” agitators overwhelmingly support the very political forces that are working to ensure we haven’t the tools or policy we need to safely reboot our economy.

The best one can say of these folks is that they are being tragically manipulated by well-financed propaganda into acting against their own, and our interests.

At worst, these agitators are malicious impediments to the war effort, actively undermining our ability to meet the enemy with smart policy and scientifically sound strategies.

We must recognize that America now has a small but organized and armed faction, secretly financed by the oligarchy, consisting of increasingly radicalized cells of anti-vaxxers, white nationalists, neo-nazis, preppers, militia-types, and probably some deluded regular folks who are desperate to get back to work, and who are effectively in league with the virus and the oligarchs who hope to profit by the suffering it causes others.

We must stop them. 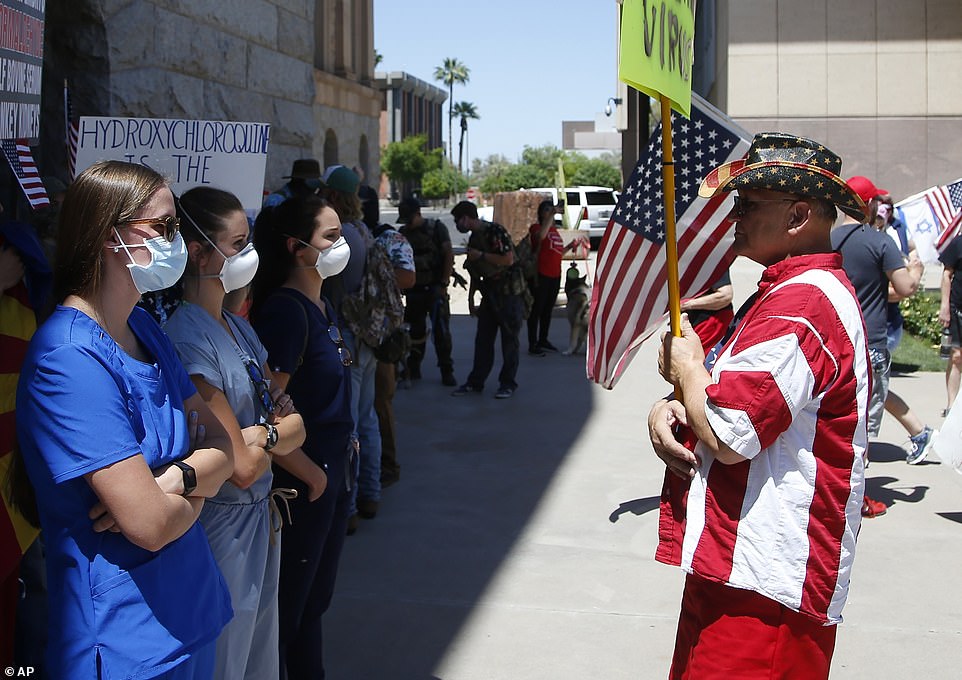 These cells of zealots are openly and proudly violating operational security measures we have taken to thwart the enemy forces. They are fomenting armed resistance to duly-empowered civil authorities working to suppress the enemy. All the while their puppet masters are plotting in their guarded fortresses and on their ocean-going yachts how to profit from this crisis, having already seen their wealth grow by a quarter trillion dollars as a result of the epidemic.

Some of the worst zealots are inside our own governments, attempting to sabotage from within our efforts to protect our citizens and contain and eliminate the enemy. They may think they are leading a movement for freedom and liberty, but they are actually just indoctrinated tools of the oligarchy.

The ideas these zealots promote are not popular, they are very far from even a minority view. They are a tiny, vocal, and very misinformed faction. It would be inaccurate to even call it a movement. Unfortunately, they are receiving press coverage far out of proportion to their actual numbers or their cause’s popularity. 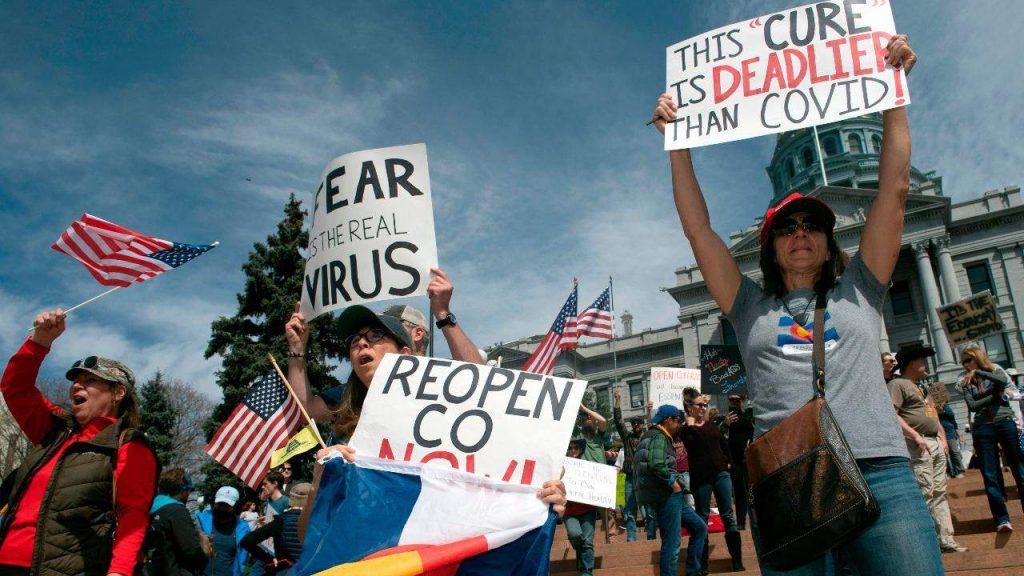 Do you few folks out there who believe that we have to “re-open now” to preserve our liberties want to really shake up the system that is actually oppressing you? First, I’m impressed you have read this far; it shows there is hope for you. Take to streets to protest the lack of government action to protect the public from the virus, that’s the fastest way back to normal life.

Stop being a misguided tool of the oligarchy and become an informed and dedicated soldier in the war on the virus.

This pandemic is literally a war of humanity against the virus. Join the only humanist side in this fight.

We should treat those who undermine humanity’s defense with their selfish and misguided dissent, not as fellow citizens with a different political viewpoint, but as the mortal enemies of humanity and democracy. They are proving themselves hostile to majoritarian democratic government, and more than willing to sacrifice their fellow humans to the virus by blindly following the propagandized orders of their oligarchic manipulators, why should we treat their terroristic tactics as legitimate?

The “re-open now” cells may be merely misguided, but they should be vilified and denounced by all moral people to shake them out of their thralldom and stop them from gaining any momentum. If they violate safety ordinances required to thwart the virus, they should be fined or arrested, per the law. If they riot in the streets or storm government buildings, they should be met with all due force required to disperse them and restore order. 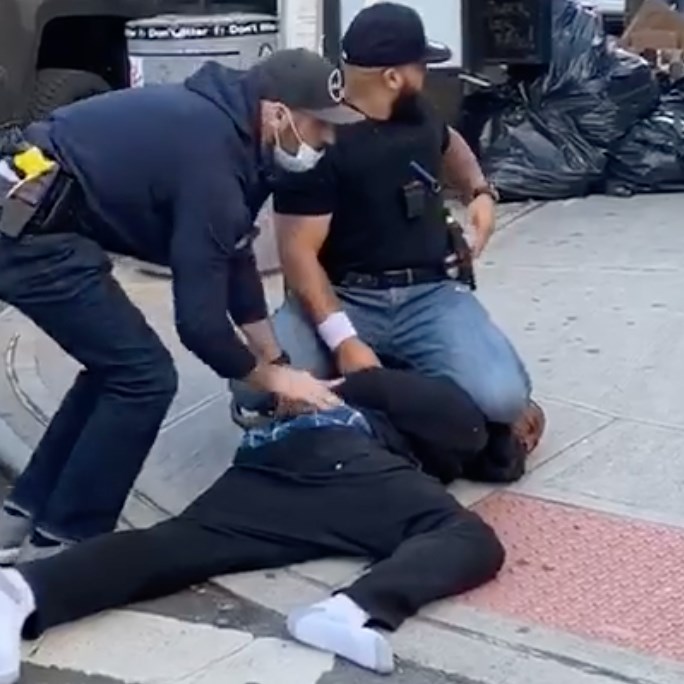 I am hesitant to recommend that police be used to enforce social distancing ordinances, for the simple reason that our criminal enforcement system is rife with racial discrimination and differential enforcement. If you examine who is actually arrested and fined for violating these regulations, it is overwhelmingly minorities. Compare that to how police treat white rule-breakers. 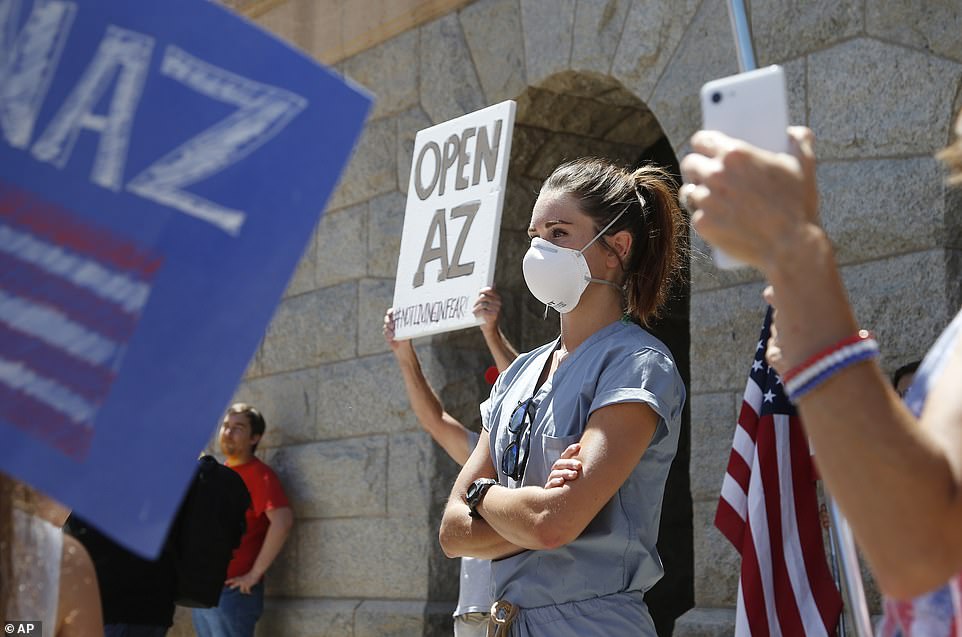 But the sort of terroristic reactions of these folks when they are called out of their violations by civilians, makes me hesitate to suggest that citizens confront their violations themselves. We have to do better, and police authorities need to be reminded who is really undermining the laws and social solidarity needed to contain the virus: overwhelmingly white people. 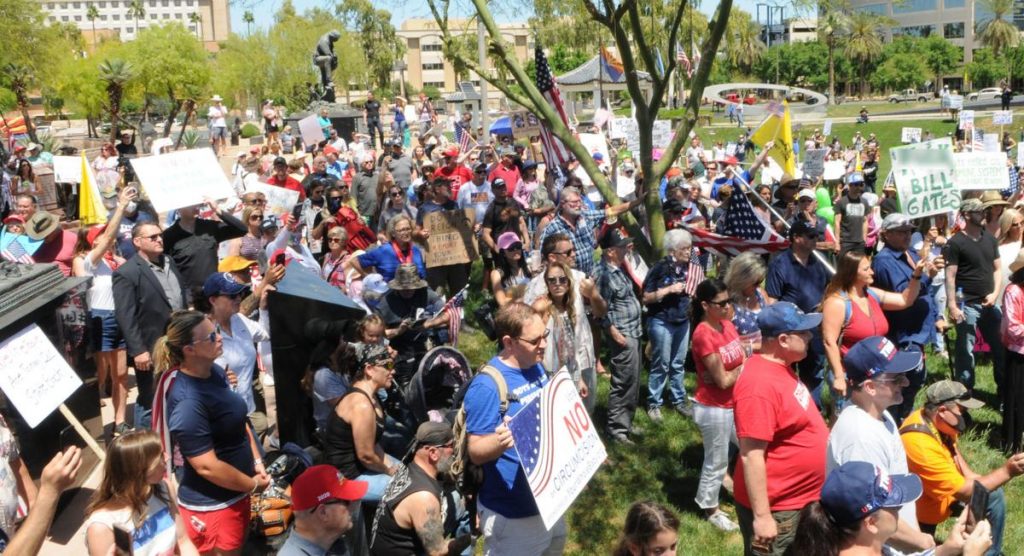 These “re-open now-ers” aim, whether they realize it or not, is to let the virus win: to offer up American lives, most especially those of minorities and the poor and working-class, to suffer and die for some mere financial gains for the uber-wealthy, or to make an imagined point about their “freedom from” all social obligations. They are either working for the war profiteers or just selfish ditto-headed dupes.

The hasty rush to “re-open now” before we can contain the resultant resurgence in infections is, in practice, a wish to surrender and let the virus decimate humanity. The oligarchy is betting that they will be among the winners who survive and thrive post-pandemic. They might be right; they have every advantage. But their manipulated tools taking to the streets to protest have been brainwashed into believing the virus is far more benign than it actually is, even as they watch thousands of their fellow citizens sicken and die. How they maintain such a delusion is a demonstration of the awesome power of propaganda done frighteningly well.

The “re-open now” insurgents are mostly just propagandized fools, but some few are knowing traitors to their fellow humans. They worship power and money above human life. But they all deserve to be shunned and denounced and forcefully deterred from their anti-social, anti-human behavior by every legal means.

In this war of humanity versus the virus, there is only one side for humans to stand on. Those who side with the virus disparage their own humanity and deserve nothing but our contempt, condemnation, and disgust. Even if one of them happens to be President of the United States… for a few more months.