All in the family?

All in the family? 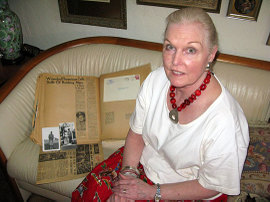 Cindy McCain has frequently described herself as an "only child."  She may have been raised as an only child without any familial relationship with her siblings, but she actually has two half-sisters from her parents previous marriages.  Cindy is estranged from her half-sisters.  Not quite the same thing (as any genealogy researcher will tell you).

The Portalski family is accustomed to hearing Cindy McCain described as Hensley’s only child.

She’s been described that way by news organizations from The New Yorker and The New York Times to Newsweek and ABC.

McCain herself routinely uses the phrase "only child," as she did on CNN last month. "I grew up with my dad," she said then. "I’m an only child. My father was a cowboy, and he really loved me very much, but I think he wanted a son occasionally."

McCain’s father was also a businessman — and twice a father.

"I’m upset," Kathleen Portalski says. "I’m angry. It makes me feel like a nonperson, kind of."

Documents show Kathleen Anne Hensley was born to Jim and Mary Jeanne Hensley on Feb. 23, 1943. They had been married for six years when Kathleen was born.

Portalski says she did see her father and her half sister from time to time.

"I saw him a few times a year," she says. "I saw him at Christmas and birthdays, and he provided money for school clothes, and he called occasionally."

Jim Hensley also provided credit cards and college tuition for his grandchildren, as well as $10,000 gifts to Kathleen and her husband, Stanley Portalski. That lasted a decade, they say.

Jim Hensley built Hensley and Co. into one of the largest beer distributorships in the country. He was worth tens, if not hundreds, of millions of dollars.

When Hensley died in 2000, his will named not only Portalski but also a daughter of his wife Marguerite from her earlier marriage. So, Cindy McCain may be the only product of Jim and Marguerite’s marriage, but she is not the only child of either.

She was, however, the sole inheritor of his considerable estate. (A multimillion-dollar fortune).  Kathleen Portalski was left $10,000, and her children were left nothing.

This story led the Washington Post to search for the other half-sister, Dixie Burd, the daughter of Marguerite Johnson from a previous marriage.  Jim Hensley divorced Mary Jeanne Parks for Marguerite "Smitty" Johnson. Sibling Revelation: An Overlooked Branch of Cindy McCain’s Family Tree  But Dixie Burd, "who is much older than Cindy, could not be reached for comment."  The Post reports that after Jim Hensley died, Kathleen Portalski received ho share of the Hensley company "and support for her family was abruptly cut off."

"It doesn’t make any kind of sense at all,” Portalski said yesterday. "He was generous over the years when I was growing up, so it doesn’t compute that he would do that; that he would leave all of us out. He paid for college for two of my kids. He gave us yearly gifts that were generous, allowed for a down payment on a home. I felt shock and disbelief. I just wish I could ask him, ‘Why?’ "

Her son, Nicholas, asked for a copy of the will and said it had been amended so many times that it was hard to tell what the original intent or language must have been.

So dad owned a gold mine: Cindy got the gold and her half-sisters got the shaft.  Nice.