In case you missed it, this happened this past week. Arizonans for Fair Elections filed an ambitious ballot initiative that includes a laundry list of election reforms that I have advocated on behalf of for years (and a few I hadn’t even thought of).

Arizonans for Fair Elections launched a ballot initiative Wednesday that proposes to lower the state’s campaign contribution limits and set up a system during election seasons for every voter to get vouchers from the state for up to $50 that they could then give to the candidates of their choice.

Supporters say the goal is to flood elections with small donations, dilute the influence of big donors and give candidates more incentive to appeal directly to the public rather than wealthy patrons.

“People all over Arizona of all political stripes feel like their voices don’t have enough impact at the state Capitol and wealthy interests are running the show,” said Joel Edman, executive director of the Arizona Advocacy Network, a left-leaning group that is backing the measure.

But this model of publicly financing campaigns, which has already been adopted at the local level in Seattle, is just one piece of the sprawling proposed ballot measure that would also allow same-day and automatic voter registration while tightening the limits on political donations and restricting lobbying.

This initiative is also reminiscent of two successful 2018 ballot measures, one in Michigan, where voters passed automatic and same-day voter registration in a landslide, and another in Missouri, where voters widely approved ethics and lobbying reforms tied to redistricting reform. (h/t Daily Kos).

What would the measure do?

Arizonans for Fair Elections expects to begin collecting signatures to get on the 2020 ballot sometime in December. It will need 237,645 signatures from registered Arizona voters to qualify.

Dubbed the Fair Elections Act, a draft of the proposed ballot initiative totaled nearly 21,000 words. It would:

“You’ve got to address a whole lot of problems at once,” Edman said. “It’s not just about curtailing the influence of big money. It’s about bringing people into the political system and making it easier to register and vote whether by mail, early or in person on election day.”

Under state’s existing Citizens Clean Elections system, candidates can get funding from the state if they collect a pile of $5 contributions and agree to abide by lower donation limits.

The proposal would raise the minimum corporate income taxes to pay for the campaign donation vouchers.

Under current law, companies are required to pay $50 or 4.9% of qualifying income — whichever is greater.

The ballot measure proposes to raise that minimum tax of $50 to $150 in 2021. The additional $100 would go to the Citizens Clean Elections Commission.

Businesses with fewer than 50 employees would be exempt from the increase.

The measure would also reinstate an option for taxpayers to get a tax credit for donating to the Citizens Clean Elections Commission when filing their annual return, an incentive that lawmakers abolished in 2012.

One of several ideas

The sprawling measure may get lost amid several other voting-related initiatives vying for a spot on the ballot next year. All the measures are still in the midst of collecting the signatures required to qualify for the ballot.

Another proposed measure would make it easier for groups to get initiatives on the ballot and toughen the state’s conflict of interest laws.

Outlaw Dirty Money backers tried, and failed, to get that measure on the 2018 ballot.

Some believe 2020 might be a better opportunity than past years to win voters’ approval for such a measure.

The presidential election is expected to drive high turnout at the polls and opponents may be playing Whack-a-Mole to stop similar measures in Arizona, potentially stretching resources thin for any “vote no” campaign.

Here’s the thing: if we did not have a legislature controlled by Republicans who want to make it harder for people to vote, to suppress classes of voters who tend to vote Democratic, and who want to nullify your constitutional right to initiative/referendum/recall by imposing onerous requirements that are near impossible to meet and subject to legal challenges for non-substantive technicalities (type face, line spacing, signature extending outside the signature box, etc.), all of these measures to make voting easier and fairer in Arizona would already have been passed by the legislature. In fact, Democrats in the Arizona legislature have filed bills for several of these reforms for years.

Since Oregon passed the first-in-the-nation “motor voter” law in 2016 aka automatic voter registration, 17 other states and the District of Columbia have passed laws requiring residents to opt out of registering to vote, according to the National Conference of State Legislatures. 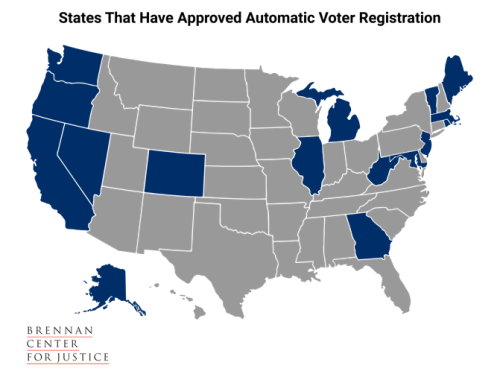 As of June 30, 2019, a total of 21 states plus the District of Columbia have enacted same day registration (SDR), which allows any qualified resident of the state to go to register to vote and cast a ballot all in that day, according to the National Conference of State Legislatures.

You will notice that Arizona is the ugly red-haired step child among our Western state neighbors. Arizona Republicans are a special breed of ignorant reactionaries.

As you might imagine, Arizona’s reigning Queen of Voter Suppression, State Sen. Michelle Ugenti-Rita (Scottsdale) — the legislator most responsible for carrying the water of the Arizona Chamber of Commerce and Industry to make voting harder, purging voter rolls of PEVL voters, and nullifying your constitutional right to initiative/referendum/recall — is opposed to to these reforms. The Arizona Capitol Times reports Groups roll out proposed remake of campaign finance:

“They bastardized the registration process, the ID requirements, and it’s very hard to understand why they would do that, other than to try to get an outcome that you’re not getting anywhere else, and I’m concerned about it,” Ugenti-Rita said.

She was particularly troubled by a clause that would allow a county elections departments to accept non-traditional addresses, such as mile markers or geographic landmarks, when registering voters. Tribal leaders say many rural tribal members don’t have standard addresses.

And Ugenti-Rita also questioned the reasoning behind automatic voter registration, pointing out that the state also requires residents to opt into receiving their ballots by mail, receive benefits and become licensed drivers.

“It’s un-American to do it the other way, to just assume people want something without having them first tell you that they want it,” she said.

So 17 states and the District of Columbia are “un-American”? Including almost all of our Western neighbors?

Seems to me this woman is just a Luddite opposed to modernization of voter registration with readily available technology to make it easier. There are a number of states who can demonstrate to Arizona how it is done right. How about calling them to testify before the Arizona legislature?

If Ugenti-Rita had her way, she would make everyone do the the drunk test in Steve Martin’s The Man With Two Brains to register to vote.

Guest Opinion: What We Should Do to Heal from Mr. George Floyd’s Murder and its Aftermath