When she was in the Arizona legislature, Arizona Republican Party chair “Chemtrail” Kelli Ward was a water carrier for every “gun rights” bill from the Arizona Citizens Defense League and the National Rifle Association.

So her latest outrage should not come as a surprise to anyone. Arizona Republican chair says GOP will ‘stop gun-grabber Mark Kelly dead in his tracks’:

Kelli Ward, chair of the Arizona Republican Party, said in a fundraising email sent to supporters Thursday evening that together, “we’ll stop gun-grabber Mark Kelly dead in his tracks.”

Kelly, the Democratic candidate for the U.S. Senate, is the husband of former Rep. Gabrielle Giffords, D-Ariz., who survived a Jan. 8, 2011, mass shooting at one of her constituent events near Tucson. Six people were killed; another 12 were wounded.

Giffords is paralyzed on the right side of her body, suffers from a speaking disorder and has partial vision loss. After that mass-shooting tragedy and others that have followed, Kelly, a retired NASA astronaut, raised his voice in support of what he calls common-sense gun controls.

“This dangerous rhetoric has absolutely no place in Arizona and is what’s wrong with our politics,” said Jacob Peters, a spokesman for Kelly’s campaign. “Mark Kelly is running for Senate to overcome this type of nasty divisiveness that does nothing for Arizonans.”

Kelly faces no competitive challenger for the Democratic nomination for the 2020 Senate seat. He is expected to face Sen. Martha McSally, R-Ariz.

Ward’s message raises the issue of gun rights, historically a winner with conservatives, but a move that polling suggests could play badly with independents and suburban voters in 2020.

This is the same thing that Caribou Barbie, the Alaska Disasta Sarah Palin said about her Takebackthe20.com ad from Sarah Palin’s Political Action Committee in 2010, that literally put Democrats in the cross-hairs. 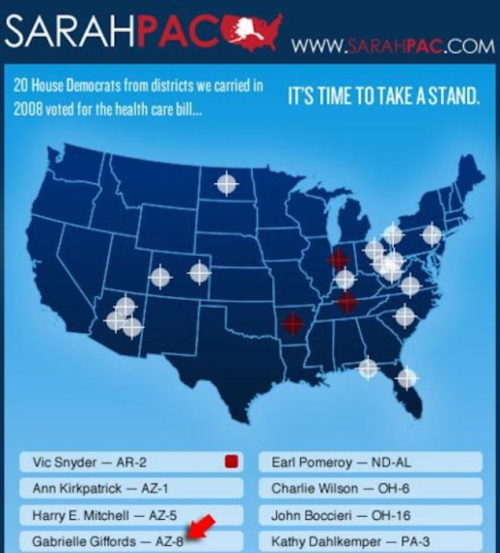 “Don’t retreat, instead- RELOAD!” was how Palin introduced the map to her Twitter followers. Days later, a vandal smashed the glass door of Giffords’ Tucson office.

Rep. Gabrielle Giffords was later shot in a mass shooting in Tucson on January 8, 2011.

It is not a question of incitement, although it can be. Cesar Sayoc sentenced to 20 years in prison for mailing pipe bombs to prominent Democrats, CNN:

Sayoc was living in his white van covered in political stickers supporting Donald Trump and was unable to keep a job for more than a year.

But after reading books by Trump, he “resonated” with the businessman and reality TV star president. Sayoc “became obsessed with Donald Trump, saw him as a father figure,” and “started buying Trump suits and ties.”

Inside the van, FBI agents seized a laptop that contained lists of physical addresses that matched many of the labels on the envelopes he mailed.

Sayoc attached a picture of the intended victim marked with a red “X” outside each improvised explosive device. 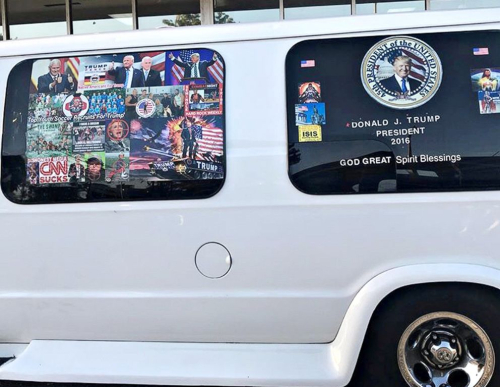 It is a question of the regular use of eliminationist rhetoric by Republicans in describing their Democratic opponents in campaigns. It is reckless and irresponsible, and has to stop.

And then there’s this guy, Rep. Paul Gosar, R-Ariz., who defended Ward on Twitter and accused the media of overblowing her choice of words.

“Differentiating between idioms, slang, analogies and metaphors from statement of facts is learned in child hood. For supposed adults to feign ignorance” about Ward’s use of the phrase “is a demonstration of ignorance. Ignore #FakeNews and it’s handmaidens of stupid outrage.”

For a political party that insists that the epidemic of gun violence in this country is due to mental illness – it is not* – one would think Republicans would be more careful about using such eliminationist rhetoric.

Rep. Gosar should just ask Congressman Steve Scalise of Louisiana, who was shot in June 2017 at a congressional baseball practice by James T. Hodgkinson, 66, who belonged to a number of anti-Republican groups, including one called “Terminate the Republican Party.” See, it can cut both ways. So don’t defend this eliminationist rhetoric, Rep. Gosar, insist that people stop doing it. Just once, be responsible.

* In an analysis of 235 mass killings, many of which were carried out with firearms, 22 percent of the perpetrators could be considered mentally ill.

Overall, mass shootings by people with serious mental illness represent 1 percent of all gun homicides each year, according to the book “Gun Violence and Mental Illness” published by the American Psychiatric Association in 2016.