Bipartisan Legislation For Ratification Of The Equal Rights Amendment

Bipartisan Legislation For Ratification Of The Equal Rights Amendment

Above: First Ladies Rosalynn Carter and Betty Ford campaigning together at a 1984 ERA rally at the Lincoln Memorial.

The Huffington Post reports, 2021 Could Be The Year Women Get Full Constitutional Rights:

With Donald Trump out of the White House and Sen. Mitch McConnell no longer controlling the Senate, two substantial roadblocks for the Equal Rights Amendment are gone. And now, nearly 100 years after it was first pitched, the ERA’s chances of making it into the Constitution are greater than ever before, according to advocates. 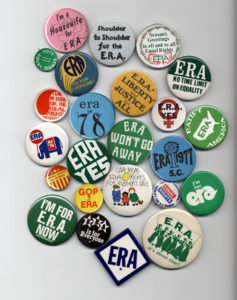 “We’re doing this for another generation of women,” Speier told HuffPost on Thursday. She pointed out that her resolution already has 197 cosponsors and said she’s already made the case for the ERA to President Joe Biden’s White House. “I think we’re gaining traction and that’s really important.”

“As we begin a new Congress, I can think of no better legislation to lead with than one that removes impediments to final ratification of the Equal Rights Amendment — an amendment that firmly embeds in law equality between men and women,” Sen. Lisa Murkowski said in a statement. “I urge my colleagues to join us in ensuring equality for all.”

With a new presidential administration and new Senate leaders that actually support gender equality, the chances of getting the amendment through have never been higher.

“It’s a good day for the ERA,” Carol Jenkins, president and CEO of the ERA Coalition, told HuffPost on Thursday.

If passed, the legislation would remove the ERA’s ratification deadline, clearing what some see as the last stumbling block for the amendment. The resolution comes as women are struggling to deal with the economic blow of the pandemic: millions of women have been forced out of the job market by layoffs or due to caregiving pressures at home. (In December, all the jobs lost in the U.S. were held by women, and women of color were disproportionately impacted.)

The amendment is one-sentence long: “Equality of rights under the law shall not be denied or abridged by the United States or by any State on account of sex.”

The Constitution simply wasn’t written with women’s rights in mind. The only mention of sex at all is in the 19th amendment, which gave women the right to vote — although voter suppression tactics in the Jim Crow South effectively barred Black women from voting for decades longer.

Advocates said the ERA could give greater force to gender pay disparity fights and sex-based discrimination claims in court [strict scrutiny standard of review]. It would also strengthen the rights of LGBTQ Americans, who would be protected from sex discrimination, too.

The ERA passed Congress in 1972 with the two-thirds majority required to amend the Constitution. The next hurdle was getting three-fourths of states to ratify it before a 1982 deadline set by Congress.

That effort fell short, with only 35 of the 38 states needed to ratify doing so, thanks in no small part to the efforts of conservatives who managed to argue that the ERA would somehow be bad for women.

The ERA vanished into the Reagan era (when “feminism” became a dirty word) and only managed to mount a comeback around 2015, when a new generation of advocates — arguing that the 1982 deadline didn’t matter — pushed to get another three states over the ratification line.

In January 2020, Virginia became the critical 38th state to ratify the ERA. But the next hurdle came from conservative men in power: Trump’s Department of Justice refused to consider adding the amendment, citing the 1982 ratification deadline. The House actually passed an extension of the ratification deadline — identical to the one introduced Thursday — but McConnell refused to bring it to the Senate floor.

“Things looked dim when they were in charge,” said Jenkins. “We think we’re in a better state this time around.”

Even if the legislation clears Congress, there might be a court fight ahead. Republican attorneys general filed suit in federal court last year seeking to block its inclusion in the Constitution. Democratic AGs filed suit for the opposite outcome. Both suits have stalled, but action in Congress could break the logjam.

Meanwhile, there are other advocates making the case that ratification deadlines are unconstitutional on their face. For example: The 27th Amendment took 200 years to ratify.

Speier was amenable to that point of view. “You can’t put an expiration date on equality,” she said, noting that 165 countries explicitly guarantee equal rights to women in their constitutions but, “We’re not one of them.”

The attorney general who took the lead on the Democratic AGs’ lawsuit, Virginia’s Mark Herring, also doesn’t believe that the deadline matters. “But if Congress wants to pass legislation that further clarifies this, Attorney General Herring would welcome that move,” his press secretary Charlotte Gomer told HuffPost in an email.

A raft of civil rights groups hailed the legislation on Thursday, including the ACLU, the National Women’s Law Center and National Organization for Women.

“We continue to live in a society where women are underpaid, undervalued and treated as other. And for women of color, trans and queer women and women with disabilities, the inequities are magnified,” said Erika Moritsugu, vice president for congressional relations at the National Partnership for Women and Families, in a statement. “We are encouraged that the renewed push for the ERA shows we are in a time of great momentum for fighting for equality for all women.”

Biden and Kamala Harris, the vice president, have both said they support the ERA. When Harris was a presidential candidate, she said the ERA would be among her first orders of business. And the White House already established a Gender Policy Council co-chaired by Jennifer Klein, a former strategist for the women’s advocacy group Time’s Up, which Jenkins believes will be supportive of passing the amendment.

Contact the White House and your member of Congress and senators to support H.J.Res.17 and S.J.Res.1 to finally ratify the Equal Rights Amendment. It’s finally time.