Former New York City Mayor Rudy Giuliani, one of the most vile politicians in America and a surrogate for the Trump campaign, went on Fox News Sunday and promoted “a widely-debunked conspiracy theory that has been making its way around right-wing websites and has recently become a talking point for the Trump campaign: because Hillary Clinton has been photographed near pillows and with stools, she must be in failing health.” Giuliani: Clinton Is Winning Because Media Ignores Conspiracy About Her Health:

“She hardly appeared this week. I don’t know where she was,” he began. He then said the media “fails to point out several signs of illness by her. All you’ve got to do is go online!”

Reminded that Clinton’s doctors have noted that these claims are not factual, Giuliani responded that the host should instead check out conspiracy videos posted on the internet. “Go online and put down ‘Hillary Clinton illness’ and take a look at the videos yourself.”

“I know it’s true because I saw it on the internet!” Why are Americans still being subjected to the ruminations of this total asshat?

Giuliani’s “asshattery” follows an opinion by the Washington Post’s Ruth Marcus over the weekend, Trump’s Sickening attacks on Clinton’s health:

And a day earlier, in case you missed it, “Importantly, she also lacks the mental and physical stamina to take on ISIS, and all the many adversaries we face.”

It’s obvious what’s going on here. The strength-stamina combo is a gender-age twofer, a double whack at Clinton for the price of one.

Strength, what men have and women lack; stamina, with its intimations of go-all-night virility. Clinton, in this depiction, is both a weak girl and a dried-up old crone.

No matter that Trump is a year and four months older — and, for that matter, endures a far less rigorous schedule. In Trump World, what counts is the attack, not the truth.

Trump began hitting Clinton on strength and stamina during the primaries, in a fascinating detour from his usual precision-bombing of opponents.

But sometimes, under attack, Trump shifts to that trusty playground tactic — I know you are but what am I? — a move intended to jujitsu the conversation away from his own perceived vulnerabilities. Thus, Trump has trotted out “unstable Hillary Clinton,” “a totally unhinged person” and “like an unbalanced person.” I’m rubber, you’re glue. Whatever you say bounces off me and sticks to you.

Increasingly, though, the rap on Clinton combines gender, age and health in a smarmy package of unsupported insinuation. “She’s a mess, a total mess,” Trump told radio host Hugh Hewitt. “She’ll do an event, she’ll make a short speech off a teleprompter, and then she goes home and goes to sleep.”

When Trump uses the teleprompter, it is a supposed token of maturity and professionalism; when Clinton does, she is failing — indeed, possibly brain-damaged. “She took a short-circuit in the brain,” Trump said in New Hampshire this month, seizing on Clinton’s explanation of how she flubbed an answer on her emails. “Honestly, I don’t think she’s all there.”

Trump is subtle only by comparison with his unhinged allies — and employees. Say-anything, know-nothing spokeswoman Katrina Pierson was on the job Thursday on MSNBC.

“What’s new are the other reports of the observations of Hillary Clinton’s behavior and mannerisms . . . as well as her dysphasia, the fact that she’s fallen, she has had a concussion,” Pierson told Kristen Welker.

“It is extremely important to note that Hillary Clinton has taken a lot of time off the campaign trail,” Pierson added. “It is something that needs to be addressed.”

On the topic of Clinton’s health, Pierson is backstopped by a cabal of conservative websites and commentators who have peddled out-of-context photos and video snippets to paint Clinton as a weakened, stumbling victim of brain damage.

Fox News’s Sean Hannity has been in the repulsive lead, citing video of Clinton’s shaking her head in pretend surprise at being accosted by reporters to suggest neurological injury. “It almost seems seizure-esque to me . . . violent, out-of-control movements on her part,” Hannity said.

Presidential candidates’ fitness for office, including their medical fitness, matters enormously, especially when Trump would be the oldest president ever elected, Clinton second only to Ronald Reagan. Both could reasonably be called on to disclose more health information; the Trumpian claim by the candidate’s physician, that he would be the “healthiest individual ever elected to the presidency,” is particularly risible.

But the Trump & Co. attack on Clinton’s health, with its undertones of ageism and sexism, has no basis in reality, and no place in a presidential campaign. It would be tempting to say this is beneath even Trump, except that it isn’t.

BONUS: Trump’s doctor is in trouble over padded resume, and Kurt Eichenwald at Newsweek has a blistering commentary, Donald Trump Tests Positive For Everything, According to His Own Doctor:

Then, there is the doctor who allegedly signed this document [re: Trump’s health]. His name is Harold N. Bornstein, and he is a gastroenterologist. This kind of physician is a specialist who treats the digestive tract. This is not an internist, who is trained specifically in providing full histories and physicals of patients. The letter signed by Dr. Bornstein, who did not return an email from Newsweek seeking comment, says that he has treated Trump since 1980. However, it mentions no history of the gastrointestinal problem that led the Republican candidate for president to seek out his help. In fact, the letter says Trump has had no significant medical problems. So why has he been seeing a gastroenterologist for over 35 years?

Unlike the Clinton letter, it does not contain a full medical history for Trump. The letter also has problems with sentence structure and major typographical errors, such as the opening line, “To Whom My Concern.” Most amusing, it says that his medical examination of Trump has “only positive results.” In medical terms, if the test is positive, it confirms the existence of disease. Is this doctor saying Trump has every medical ailment that could be found in examination? Does he not know the meaning of the word? Or, as I suspect, was the letter written by someone in the Trump campaign? 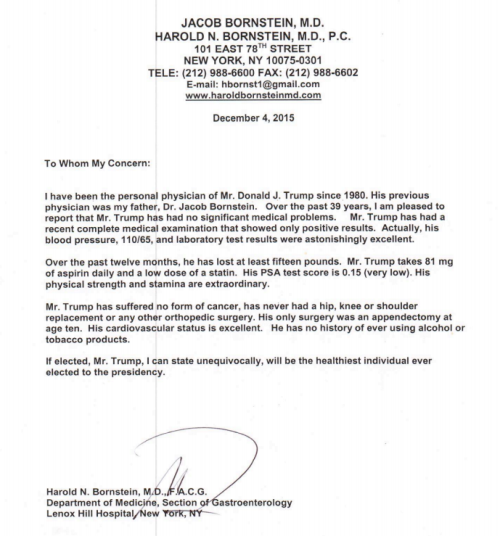 Now, if conservative conspiracy theorists want to play a “the candidate could have health problems” game, let’s do that. The letter from the Trump campaign mentions nothing about family history, as any normal letter assessing someone’s medical condition would. (Clinton’s does.) Family history is critical in understanding possible diseases that may emerge, particularly those with a genetic link. Trump’s father, Fred Trump, died from complications of late-onset Alzheimer’s disease. That condition, which is the most common form of Alzheimer’s, emerges in people in their mid-60s or later. Trump is 70.

There is a genetic component to the disease. Risk increases when a person has a particular type of apolipoprotein E (APOE) gene on the 19th chromosome. The type of APOE gene a person has is testable. Has Dr. Bornstein, the gastroenterologist, tested for it? If not, why not? Is that why Trump has avoided seeing an internist, since they would conduct such a test? Such a test might reveal that Trump is unfit for office since dementia, unlike epilepsy, could damage a president’s ability to think coherently.

Moreover, people have been suggesting that they may have seen symptoms of Alzheimer’s in Trump’s behavior. Yes, I am using Trump argument style of “people say,” but I’m going to help you identify the people. Type “Trump and Alzheimer’s” into Google and lots of articles and online comments pop up pointing out behaviors of Trump’s that are consistent with Alzheimer’s: meandering speech, poor self-control, not properly responding to questions that are asked, erratic behavior.

See? I can generate conspiracy theories too. Please understand, I’m not saying Trump has Alzheimer’s. I’m just showing how easy it is to take a few facts and line them up to play the “I’m only asking questions” game. So if conservatives want to keep pushing their “Clinton’s health” conspiracy theory, even though they have a full assessment of her medical status from her doctor, then I’m going to keep demanding that Trump release a letter from a real internist that has real medical tests and results for Alzheimer’s.

Yes, let’s get a real doctor to do an independent medical examination of Trump, not Donald Trump using the letterhead of a doctor to write his own reviews, like he did with “John Miller” and “John Barron.” Donald Trump and his alter egos. Maybe we should get a psych eval while we’re at it just to be safe.